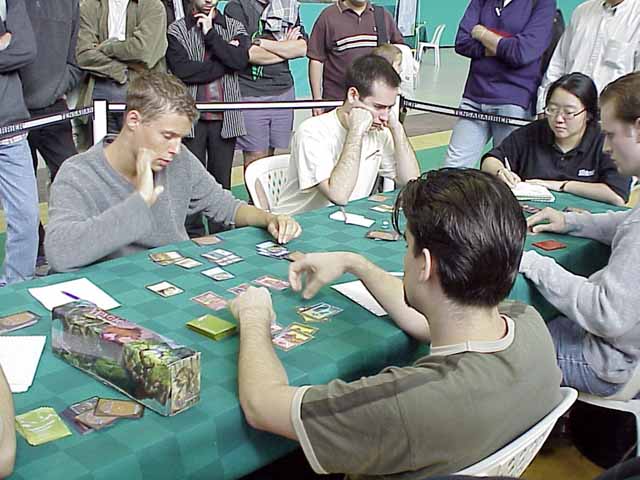 Noah Boeken is the current European Champion and is widely regarded as one of the best limited players in the world. Ed Fear finished 11th at this years Worlds, and with a Ranking somewhere around 2100, this match promised to be one of great skill and loud trash talk. Noah was playing a blue white flying deck, involving a light rebel chain and a number of combat tricks. Ed Fear was playing Red Green tapped out beats with some burn and 2 Spidersilk Armours.

Noah failed to pick the sizzle from Ed's hand, so Ed decided to go first. He looked at his hand and seemed pleased saying 'This hand has giant Madonna Boobies, it's tight' Noah also seemed happy so they started to play. Ed came out faster, with a third turn Spur Grappler and a 4th turn Warrior. Noah played his Aura Fracture which Ed trashtalked violently, and cast Rhystic Scrying on turn 4, submerging the warrior as a result. Ed chose to lay Keldon Berserkers this turn instead of the Warrior, and beat with the grappler, leaving Noah on 12. Noah made his first creature on turn 5 in the form of Coastal Hornclaw. Ed then made Gerards Irregulars, meaning Noah had to block. He traded for the Berserker, going to 4 life before making another Hornclaw on his turn. Ed cast the Warrior and mana burned for 1 before serving for the win. A brutal turn 7 kill from a deck that was expected to be the weakest on the table.

During sideboarding Noah offered Ed the draw, but after his crushing victory in game one Ed felt he'd be better off playing.

This game was one of the greatest feature matches I have ever witnessed, but not for the great plays, more for the character of the players involved. Ed started more slowly than before with a Pigmy Razorback and a Spidersilk Armour, which he was using to stall Noah's Drake Hatchling and Stormwatch Eagle. Ed made the Warrior, only to have it submerged while Noah tried to outrace the stall that the Armour would inevitable cause. Noah then cast Rhystic Circle, to the surprise of both his opponent and the crowd, and proceeded to show what a good card it could be, preventing damage from Ed's fatties during his upkeep. Ed of course had to allow this so he could develop his board position, which he did with the Silt Crawler. Noah withdrew the Crawler and the Warrior and served with the Eagle and the hatchling in his next turn. He traded a land for the Razorback, and then played Saprazzan Legate for free, as well as recasting the Eagle. Ed remade the Warrior, which in conjunction with the Spidersilk Armour helped ensure the stall until he could win. He further strengthened his board position with Vine Trellis and Silt Crawler. Noah Toppled the Warrior before casting Wandering eye. Looking at Ed's hand of Panic Attack, Deadly Insect, Bracers and Thrive. Noah said 'That's some scary S*#t' much to the amusement of the increasing crowd. Ed drew Shock Troops off the top of his deck, still being held at bay by the Rhystic Circle, he made his Deadly Insect. Noah Topdecked Rhystic Scrying and drew into 2 Islands and a Mine Bearer. Ed drew Seal of Fire and made his Seal of Fire and his Shock Troops. There then proceeded to be an 18 turn stall, during which the board developed like so. Noah gained 2 Hornclaws, Defiant Falcon (who searched up a Lieutenant), and Defender en Vec, all the while needing to draw Aura Fracture for the win. Ed gained Grappler Grunt, Berserker another Spidersilk, and another Seal of Fire. He also drew into Natural Affinity, and was awaiting his Rupture to secure the match. Noah had less cards in his library, but still had to draw an Aura Fracture before Ed drew Rupture in order to win.

With 1 card left in Noah's library, Ed drew Rupture. They surveyed the board for a long time before Ed cast Natural Affinity, and Ruptured, so effectively 'geddoned Noah's land. Everyone was looking at Noah's final card, wondering whether it was indeed the elusive Aura Fracture, or whether he had sided it out after Ed's trash talk in game one. Ed was fairly certain that Noah had sided it out, and just as he was about to win on deck size, said,

"If that bottom card is an Aura Fracture I will give you 100 US Dollars right now."

Noah flipped the Fracture on to the table, much to the astonishment of the audience, and as good as his word Ed handed 2 american 50's to the Dutchman, before most of the spectators had even realised what had happened. This brought great amusement from the audience, especially from Bob Maher Jr. who said it was the weirdest thing he'd seen in a long time. After the impact of the moment had passed the crowd, and players realised that Ed had cut that card to the bottom of the deck after Noah had searched up the Lieutenant, and then proceeded to draw Rupture in time to save himself from flying beats, making it statistically incredible! Noah searched his hand desperately looking for a way to save enough land to Fracture for the win next turn, but with 2 Seals of Fire and a Shock Troops playing on Ed's team it was academic. Noah conceded, slightly placated by the 100 dollars he had just earned.

A great match for spectators, and in this case not such a bad match even for the loser.