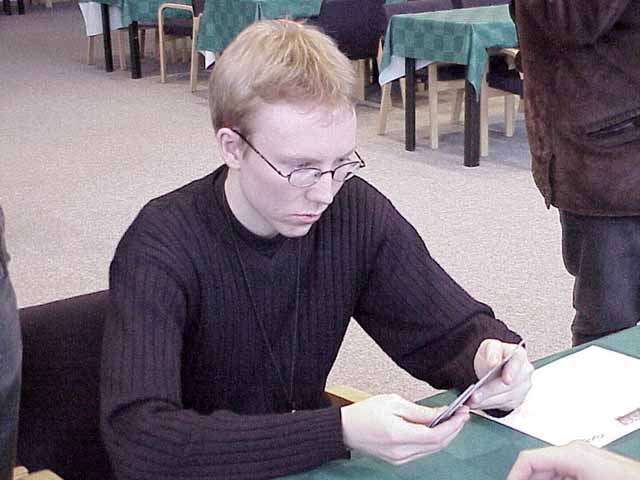 In the first round of the second day, Erno Ekebom from Finland faced Grand Prix Porto Champion, Antoine Ruel from France. Erno was with a green, white and blue deck based on beatdown creatures and tappers, while Antoine had a black, blue and white deck with solid creatures and some removal along with a Nightscape Master.

Erno won the die roll and chose to play. He started by casting a first turn Sunscape Apprentice and a second turn Benalish Trapper, and the attacks started. Antoine got a rather slow start, he got out a turn two Vodalian Hypnotist that he eventually traded for the Sunscape Apprentice. During turn five, when Erno had cast a Razorfoot Griffin as well, he finally did something - he played Reviving Vapors to get to a swamp. Then he dropped a Vodalian Zombie.

The Zombie must have been rather annoying for Erno as he got out a turn six Serpentine Kavu. Antoine also got out a Zanam Djinn that would have helped him defensively if it hadn't been for Erno's Trapper. The Finn tapped the Djinn during Antoine's end of turn step, and then he tapped the Zombie to send his creatures in for six, knocking Antoine down to seven life. He also had more creatures up his sleeve, a Thornscape Apprentice came into play, and so did a second Razorfoot Griffin.

Antoine was at this time clearly on the defense. He Agonizing Demised the Thornscape Apprentice, and then he cast an Urborg Drake - unfortunately a far from perfect blocker. Erno didn't stop attacking though. He tapped the Zanam Djinn and sent his Kavu over for a visit. Antoine chose to doubleblock the Kavu, losing his Djinn but staying at seven life.

Then, Erno figured it was time for some creature removal. He Shackled the Vodalian Zombie, and Antoine had to attack with his Urborg Drake. The Frenchman dropped a Nightscape Master, and when Erno sent his two Griffins, he Repulsed one of them so that he only went down to five life.

But Erno had more tricks, he tapped the Master and Shackled it down. He also played a Galina's Knight. Antoine didn't really have any answers to the growing horde. He played a Hypnotic Cloud to get rid of the Griffin in Erno's hand, and he also cast a Vodalian Serpent. But Erno simply tapped it, removed the Shackles from the Vodalian Zombie, and recast them on the Serpent. Then he attacked to bring Antoine down to one life.

"What can I draw?" Antoine wondered while reaching for what would be his last card of the game. He didn't draw anything useful though, and scooped. 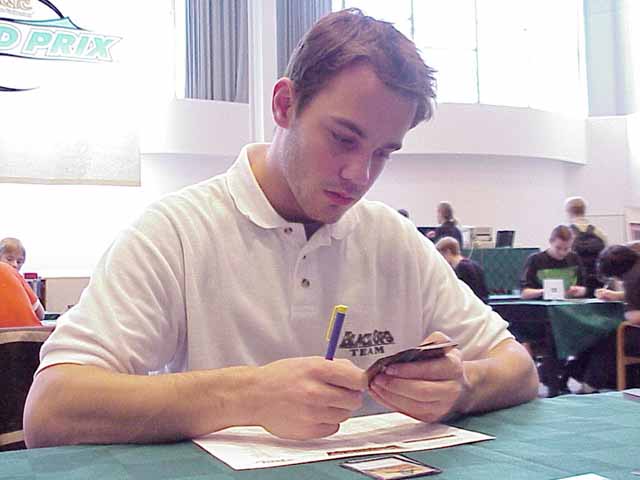 Unfortunately, Erno also had creatures that wanted to attack. The Finn got out a turn three Quirion Sentinel and used the one extra mana to cast a Llanowar Knight as well. So while he took two points of damage from the Golem every turn, he could attack back for four.

Antoine cast a Harrow, and during the following turn, he dropped a Serpentine Kavu. But Erno, who hadn't done anything during his last turn, sacrificed an Irrigation Ditch to get blue mana so that he could Exclude the creature. Erno then attacked to bring Antoine down to twelve, and he also dropped a Razorfoot Griffin. Antoine got out a Phyrexian Reaper, but it couldn't stop the Griffin nor the Knight - nor a Glimmering Angel that Erno played during his next turn.

And as if that wasn't enough, the Finn also played Strength of Unity on the Griffin to make it even bigger. The attack took Antoine down to two, the Frenchman drew a card, and he scooped.