They're certainly loud. Just ask anyone who watches them play, or tells stories. Two of the most expressive personalities on the professional circuit got matched up for a tough beginning of the second day, and the decibel level didn't disappoint. One can hear this kind of match going on from across the room, for better or for worse. Regardless, these two players are mostly business, when something as important as the second day of a Grand Prix is on the table However, if you haven't ever seen either of these guys do a money draft at a Pro Tour sometime, it's definitely worth your time. 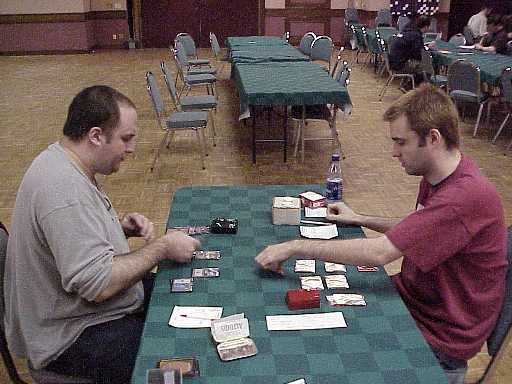 That said, game one turned out to be a good game to watch, but decidedly uneventful in terms of chatter. Both players drafted strong decks, from a very strong last table, with Wise going U/B and Pikula going R/B. Gary won the flip and elected to play first, despite some pleading from Chris. After a mulligan on Pikula's side, we were ready to go, with both players leading with a couple basic lands of their colors and the respective two-mana zombies in their colors as well. Both players were content to attack and not trade their zombies early, with Pikula dropping a turn three Hooded Kavu as well. When Wise dropped a turn four Tsabo's Assassin, Pikula untapped and Zapped it, drawing a card in the process and swinging for four with the Zombie and Kavu. Having his assassin killed didn't phase Wise, as he untapped and kept the curve going with a kicked Faerie Squadron. With the Vodalian Zombie tapped, Pikula was content to pay a black mana to give the Kavu fear, and attack, leaving his Zombie back ready to trade with Wise's. That did indeed happen, as the Faerie Squadron came over with the Zombie to drop Chris to 11. Chris managed to destroy the Faerie Squadron next turn with a well timed Plague Spores, but got his Hooded Kavu recoiled. After Gary played out a Phyrexian Slayer and Tower Drake over the next two turns, Chris was in some trouble. Chris was putting his own pressure on though, putting Maniacal Rage on a Phyrexian Reaper and coming over for five. In a tight race now, Wise drew and played a Distorting Wake on Pikula's reaper, getting rid of the Maniacal Rage as well. When Chris Soul Burned Gary down to 1 from 7 the next turn, he gained 4 life in the process, but now Wise had a clock in the form of a Phyrexian Reaper and a Tower Drake. Chris had two turns to draw one of what I would later find out to be nine cards, but couldn't find a kill card and fell to the two flyers. 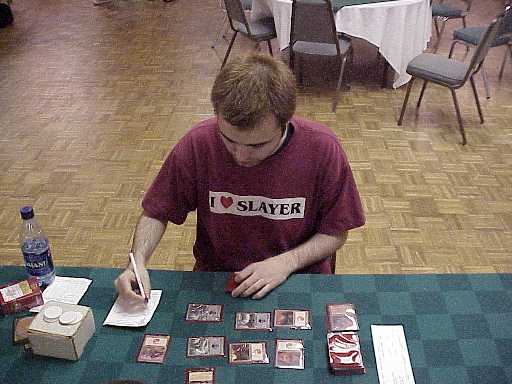 Game two saw a very subdued start, but once Pikula hit five mana, the bombs started coming. All Wise managed to muster in the early game was a turn three Metathran Zombie and a turn five Rainbow Crow. Pikula's turn five Skizzik (with kicker) got Maliced away but turn six he found a kicked Pouncing Kavu, turn seven an Urborg Shambler and a Scorching Lava for the Crow, turn eight Pouncing Kavu number two and a Shivan Zombie, and turn nine Trench Wurm. All Wise had in play was that same little regenerating Zombie, but Pikula found another Scorching Lava for it on turn 10, and when he came over for nine damage, Gary was drawing dead. A Distorting Wake didn't help, as Chris could just replay the hasted Kavu's next turn, and Gary conceded shortly thereafter. 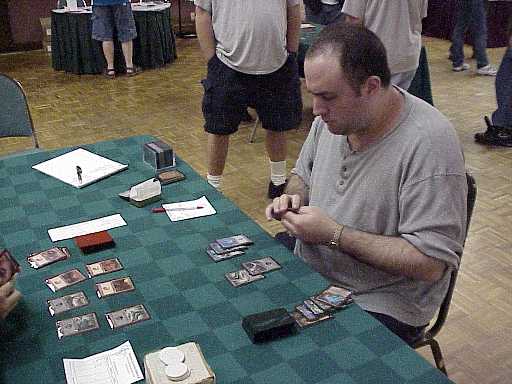 Game three saw another mulligan for Pikula, as his starting hand contained only one swamp and a bunch of red cards. Chris felt like even though he could play a couple of those cards if he drew a mountain (there were ten in his deck) he needed much more mana to actually win, and I tend to agree. Anyway, Pikula's mulligan hand didn't look much better, as he again facing a lone swamp. Gary's draw wasn't explosive, but it was certainly solid, as a turn three Tower Drake followed by a turn four Vodalian Zombie started chipping away while Chris was stuck on three land. Chris' first attempt at a blocker (Trench Wurm) got Prohibited, and by this time his life total was falling rapidly. Gary added a Rainbow Crow to the assault, and Chris was in trouble. He came up with an Urborg Shambler, but that doesn't help the flyer problem, and when his meager attempt to race (by playing an Ancient Kavu) got Maliced away, he scooped and launched into a semi-rant, much to the delight of all the onlookers.