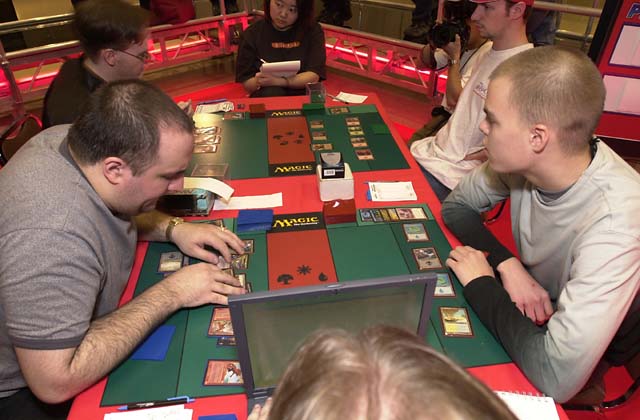 Helsinki, Finland's Tommi Hovi was the first player in history to win two Pro Tours. Jon Finkel and Kai Budde have since joined him in that exclusive club, but Hovi will forever be the first. Gary Wise has been one of the loudest personalities on Tour (and on the net) for years and he's high up in the Player of the Year race this year thanks to his win at the team Pro Tour. He's bounced around from team to team and for this event he went back to his roots and playtested exclusively with fellow residents of Toronto, Canada. They decided to run a discard-heavy black/red deck with a touch of green so they could use both of Thunderscape Battlemage's kickers. Hovi was running a version of "Go-mar" - the most permission heavy deck in the field that happens to have Dromar's Charm, Dromar's Cavern, and Dromar himself. Each player was 5-2 as they sat down for the first round Saturday morning.

Wise's deck came out just the way he wanted - turn 2 Nightscape Familiar, turn 3 Blazing Specter. Since Wise had also won the die roll, there was no way for Hovi's blue/white/black deck to stop that Specter from hitting him at least once. Hovi discarded a Probe and then Hobbled the Specter on his third turn. Wise answered back with Thunderscape Battlemage with the black kicker, forcing Hovi to discard two more cads (Dromar and Absorb). 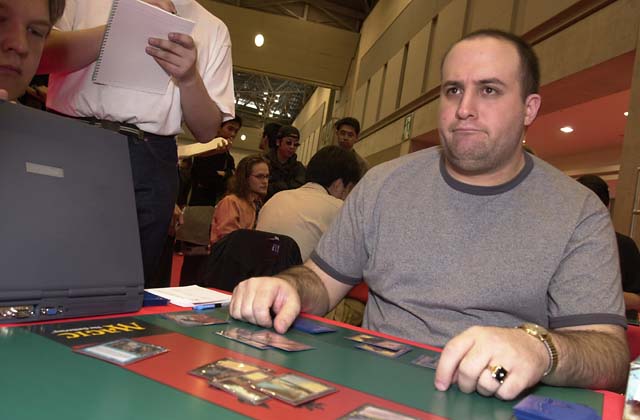 Hovi played Fact or Fiction on turn 4 and Wise split them into (Agenda, Plains, Coastal Tower) or (Swamp, Dromar's Charm). Wise's big plan was to try to finish Hovi off by attacking with Flametongue Kavu (which he played by destroying his Hobbled Specter), his Battlemage, and his Familiar before the Agenda could matter. Hovi took the Agenda pile anyway because he had a different Dromar's Charm in his hand that could kill the 4/2 Kavu. Wise had to settle for 3 damage on his next turn (dropping Hovi to 10) and a pair of Pyre Zombies. Hovi answered back with "the big guy" - Dromar. Wise swarmed in for 5 damage (losing his Battlemage) while he could still attack and then it looked like Dromar might stabilize the board since he could return all Wise's creatures to Wise's hand. However, that's when Wise dropped his bomb: Crypt Angel. Protection from white and flying pretty much neutralized Dromar and Hovi conceded rather than forcing Wise to go through the motions of attacking in one final swarm.

Wise's first two spells of game 2 were both Bog Down. Hovi pretty much neutralized them by Fact or Fictioning and taking an Agenda. Hovi then Absorbed to stop Blazing Specter, but didn't have a counter left when Wise played Crypt Angel, returning the Specter to his hand and creating his first offensive threat. Hovi's next fact or Fiction was split as follows: (Rout, Plains, Salt Marsh) or (Meddling Mage, Absorb). Hovi had to think for quite a while since he had Yawgmoth's Agenda in his hand, but wasn't sure exactly when he wanted to play it. Hovi eventually decided to take the Rout. Hovi decided to play the Rout during his next main phase even though he knew Wise had the Specter in his hand because he wanted to play a Salt Marsh and set himself up for Agenda on his next turn. Wise had nothing in his hand other than that Specter so he just scooped at 20-20, knowing that Agenda was going to do him in. The players thus had plenty of time for game 2. 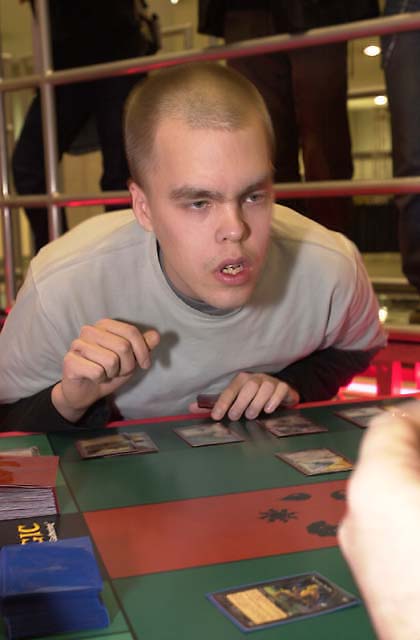 Hovi kept a draw for game 3 which included just one land (a Coastal Tower) plus an Opt. After drawing twice and playing Opt, the only other land he could find was a Dromar's Cavern that bounced his comes into play tapped Tower and thus gave him 8 cards in hand, forcing him to discard an Absorb. Wise forced him to discard several more cards playing turn 2 Nightscape Familiar, turn 3 Specter, turn 4 Thunderscape Familiar with the black kicker, and on turn 5 he added a second Specter to his assault! Then, with just 7 life left and 4 creatures staring across at him, Hovi finally got access to 3 mana for the first time in the game. He played a Hobble and then just leaned back morosely while his hand and the match were stripped away.