Walls is several years removed from his U.S. Nationals team appearance but is still a formidable competitor who was in an excellent position to make a run at his third U.S. Nats Top 8 finish at 6-1 on Day One. Gabe hosted an assembly of gamers at his home in Indiana in the weeks leading up to GP St. Louis and Nats. One of the people taking advantage of his hospitality was his opponent this round, Billy Moreno. 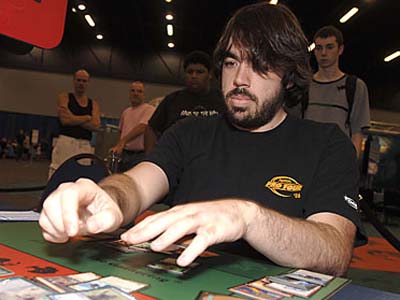 Does Billy Moreno have the heart of a champion?

With a second-place finish in Los Angeles and a virtual eighth-place finish in Honolulu, Billy Moreno was on the top of many people's short list of potential U.S. Champions for this year. Prior to the week previous, Gabe was skeptical, although he seems to have come around. Gabe's confidence that Billy would not be the U.S. Champion has led to a friendly grudge match between the two. Almost everyone has been expecting to see the two of them settling the argument in the Finals, but the first round was being played out at the start of Day Two.

As I walked over to the Feature Match area there was only one match on display. I looked over at the pair of empty chairs next to Billy and Gabe and asked what happened.

"I made Fob and Zoz play their match in the JSS Feature Match area."

Ben Zoz and Luis were at the same table as Billy and Gabe for the draft and nobody wanted to give away any intel on the contents of their decks.

Billy mulliganed his first two sets of cards to kick things off, which prompted Gabe to rise out of his chair and chant for Billy to keep sending them back.

Billy laughed, "Show me your hand and I will go to four."

Rich Hoaen sat down behind Gabe to check on his status. Rich had been recording Gabe Wall's draft picks for the draft viewer. No one is ever happy having to justify their draft picks, so you can only imagine what is like to justify them to Rich Hoaen - even if you are Gabe Walls. 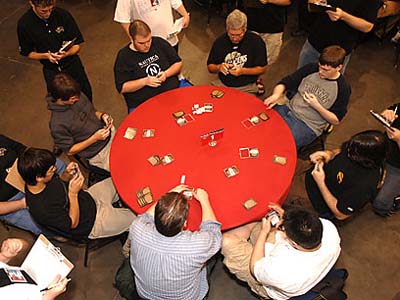 "If you looked at my opening hand you would think I have a good deck."

Rich shrugged, "You're only ten cards off from a real deck."

Billy kept his five-card hand but scuffled to get past two mountains for a couple of turns. Meanwhile, Gabe accelerated his mana with Into the North and then played Boreal Center and Simian Brawler over the next couple of turns. Billy was still stuck when Gabe played out Vexing Sphinx. "Man, this is a nail-biter," laughed Gabe.

Billy finally found a third land and summoned Martyr of Ashes, which cleared the board of everything but the Sphinx in combat. Gabe fortified with Frostweb Spider.

"Am I going to die to that thing?" groaned Billy. Gabe was going to have to let the Sphinx go on his next turn and he was looking at the one point beatdown while on five life.

Diamond Fairie came down for Gabe, but a fourth land allowed Billy to kill it with Stalking Yeti. Gabe had nothing and suddenly there was a subtle shift in the game momentum. Billy played Simian Brawler and Gabe had nothing again. Billy even got to attack, but he had to be cautious - the score was seventeen to four.

Both players summoned Boreal Centaurs over one full turn but Gabe's was off the top while Billy was playing cards from a hand that was still packed near to capacity.

The players settled into a mild stalemate but Phyrexian Snowcrusher from Gabe meant that the red zone would see some action shortly. Gabe was not looking forward to it though, as Billy just kept playing big guys like Thermopod and Aurochs Herd - fetching another Herd.

"Man! Billy mulled to five and my hand was really good," he glared at the Sphinx in his bin. "I guess this guy is terrible."

After the Snowcrusher gobbled up Brawler and Centaur for the trade, Gabe had Ronom Serpent. Billy had his second Herd.

Billy double blocked when the Serpent came over and Gabe thought for a moment.

"What could be in your hand?" asked Billy.

Surging Aether bounced one of the blockers (ripple whiffed) and the Serpent munched on the remaining victim. Billy replayed his Thermopod.

Gabe made a nice play to cast Frozen Solid on the untapped Herd. He attacked with everyone. Even if Billy blocked either of the small guys the Herd would have died to the lesser-known text on the blue enchantment. Billy was at four yet he double blocked the Serpent. Gabe thought about it for a minute and ultimately pumped the Centaur, which would be for the win.

Billy had Surging Flame to kill the snow creature and he only took one.

Gabe shook his head. "I thought Billy might have punted."

"I did punt," confessed Billy. He just happened to have the red spell.

Billy followed up with Bull Aurochs, which finished Gabe off with the help of a little Balduvian Rage.

"I was chanting for Billy to go to four because I knew I couldn't beat him on five."

Richie wandered back to the Feature Match area and noted the game win recorded next to Billy's name with surprise. "Toss that one, did we?"

"Toss it?" Gabe turned up his hands as if there was no other possible outcome.

"What about turn five?" asked Rich, who had walked away on that turn. "Actually I think you lost that one on turn two." Rich's contention was that he knew Billy had to be keeping a weak hand at five cards on the play. He thought Gabe should have summoned the snow Centaur on turn two instead of developing his mana.

Gabe thought for a moment about choice and said, "I will draw…"

"…against your terrible deck," he added with obvious glee.

"Can I play with this?" Billy muttered to himself.

"No helping, BDM!" Gabe cautioned as I leaned over to look at the hand. Then he thought better of that statement. "Actually YOU can help Billy, and I will get Richie."

Billy did not need any help to ship back the one-lander and Gabe was less excited about the mulligan after Game 1. "Billy Moreno is going to mulligan four times in this match and destroy me."

The game got going with Boreal Centaurs on both sides and Boreal Druid for Billy.

Squall Drifter came down for Gabe while the two players traded blows with their horse-men. When Billy blocked the Centaur with Boreal Druid Gabe sighed, "Yup."

He knew it meant Resize was in his future and he had to tap out for Surging Aether and another ripple-whiff. Gabe had to take three more from the Centaur, falling to 11.

Billy went to 14 on the counter-attack. Gabe had Rimewind Taskmage and more than four snow permanentss. He was going to have two tappers coming online the following turn. Billy attacked into the 1/2 with his Druid. "I will block."

Billy went up a couple of cards trading Balduvian Rage and the Druid to kill the Taskmage, get back Resize, and draw from the slowtrip. Gabe came across for four and played Diamond Fairie.

Deepfire Elemental landed with an impressive thud on Billy's side but Gabe just shrugged and pointed to his two snow fliers, multiple snow lands, and the text box on the Diamond Fairie. "I see it but I can do 10." 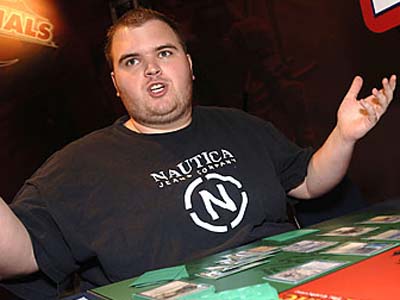 Rich wandered back over and was suitably impressesd, "We didn't manage to toss that one."

Billy sighed as they shuffled up for the final game. "I thought I was supposed to fight you at the end of the tournament. You are supposed to be the end boss."

Rich offered the intriguing possibility of a rematch. "Remember that Mario game where you fight Bowser at the beginning and instead of killing him he just disappears…"

"I want to play first but I am going to mulligan…I will play," Billy immediately regretted the decision and dipped back into the deck for six new cards.

Billy kept his next six and went to play a land before Gabe stopped him.

"Whoa…whoa…whoa…reality might be hitting here." Gabe also took a mulligan, giving Billy a chance to chant for a change.

Gabe kept his next six and played Rimewind Taskmage on turn two.

"Probably," sighed Billy even before Gabe played a second Taskmage and Flashfreezed Billy's Simian Brawler. Gabe was ready to restock on cards with Survivor of the Unseen, but Billy had just enough snow in his land pile to Skred it for one. It was also just enough mana to get the Serpent that Gabe played on the next turn revved up for the red zone.

The game went on for a couple more turns, but it was merely a formality.

Gabe was now 7-1 and looked like he was headed for the Top 8. Billy was 6-2 and still in good position to get his finals rematch with Bowser.