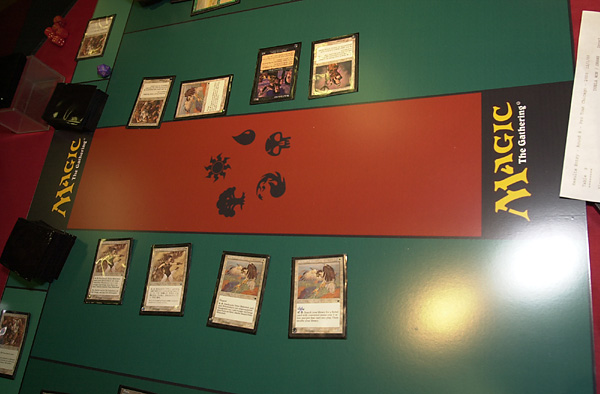 Kai Budde, from Germany, was 1999 Player of the Year, which no doubt came in part from being the1999 World Champion Coming back from the Sydney Invitational, Kai has most recently impressed the Magic community with yet another assortment of horizontally-striped sweaters in subdued hues.

Jakub Slemr, from the Czech Republic, is another World Champion and he was one first (1997), so there. He and Kai briefly but warmly recalled the one previous time they met in a match (1999 World Championship Top 8), and the match was marked by dry central European humor from that point on.

Jakub won the roll and went first; both players kept their initial hands. Kai began the rebel chain first, but Jakub was the first to get out Lin Sivvi (third turn) and Rebel Informer (at the end of Kai's fourth turn). Kai quickly got out his own Informer, and the next three turns were a struggle for board control, which of course in the rebel mirror match is really a struggle to find more lands. Jakub was stuck on turns six and seven with five lands - not enough to double-inform - while Kai spent turn seven with only six lands, hoping for the seventh so that he could both recover his own Informer from the bottom of his deck (where it kept gravitating) and use it.

Both players got the land they needed on their eighth turn; and since Jakub had both turn advantage and Lin Sivvi on the board, he was able to keep Kai on the defensive. Perhaps the key play came on Kai's eighth turn, when Jakub tapped out to "inform" the Falcon. In response, Kai used it to search for his Informer, and then used his last three mana to "inform" Jakub's Informer. Jakub used the alternate casting cost of Reverent Mantra (pitching Disenchant) to give all creatures protection from black. 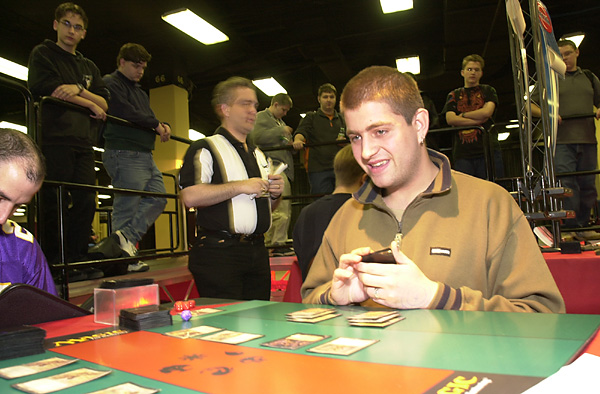 With momentum back on his side as he untapped for his ninth turn, Jakub informed Kai's Informer that for his information, only one Informer was informed enough to . . . er, inform. Then he played Parallax Wave, which is a lot simpler to write.

The trickle of combat damage to this point began to turn into a flood. Kai valiantly continued to cast creatures, expecting a Wane on Parallax Wave to surprise Jakub in combat; but Jakub was ready with a Power Sink. Soon afterward, Kai conceded.

Both players did considerable sideboarding . . . in the same direction. Mageta the Lion and Wrath of God replaced Crusades and Waves for Jakub, Longbow Archers and assorted rebels for Kai. Kai also slid in Armageddon . . . but you'll have to wait and see if that made any difference.

Kai went first; both players kept their initial hands. Jakub began the match with a hearty wish aloud for "six lands and a Sergeant!" but it was not to be. Kai got a first turn Sergeant and swung for a couple of turns with the Sergeant (since Jakub's early Rishadan Port made searching difficult). Jakub came up with another turn-three Lin Sivvi; but Kai was ready for her with Parallax Wave. A couple of turns later, a woman bearing a striking resemblance to the first Lin Sivvi found her way to Kai's side of the board; and when the Wave collapsed, Jakub's Sivvi simply slinked (slunk?...well, whatever it was, it wasn't pretty) off to the graveyard.

Before long, Kai had nearly the exact same Sivvi-Informer advantage over Jakub that Jakub had over him the previous game. Over the next five or six turns, Kai applied a modest but constant flow of creature damage, while still managing only four or five lands to use the Informer and search for backup. Jakub's own Informer made a brief and noisy appearance around turn ten; but Kai's Wax on a Sergeant in the middle of combat put Jakub's Informer in a bad position, and it soon found itself lurking at the bottom of the deck. Kai consolidated his gains with Mageta, and despite Jakub's triple-Port lockdown of lands, Kai did amass enough land to both sweep the board and push through a Chimeric Idol for lethal pressure. 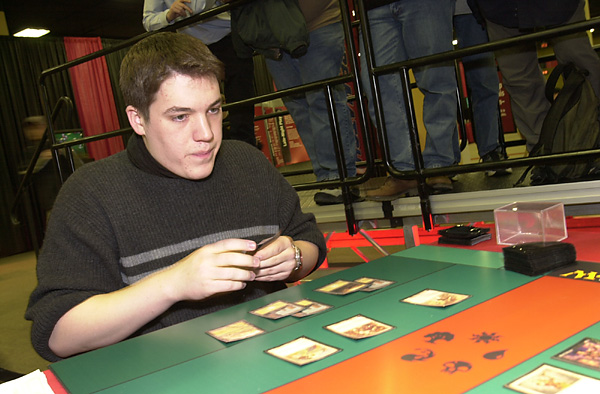 Jakub went first; both players kept their initial hands. Even though there was no time pressure, this game was extremely quickly. Jakub played a third-turn Lin Sivvi for the third time this match; but Kai's Chimeric Idol and subsequent Wrath of God wrested board control from Jakub, perhaps for good. A slugfest of creatures ensued, with Idols, Steadfast Guards, Defiant Falcons, and Defiant Vanguards all typically being hard cast and thrown into the fray. Kai did get an Informer on the board by turn eight, and this key card cleared the path for an increasing amount of combat damage. When he had Jakub's side completely clear of creatures, sported three of his own, and cast Armageddon on turn ten, Jakub conceded.