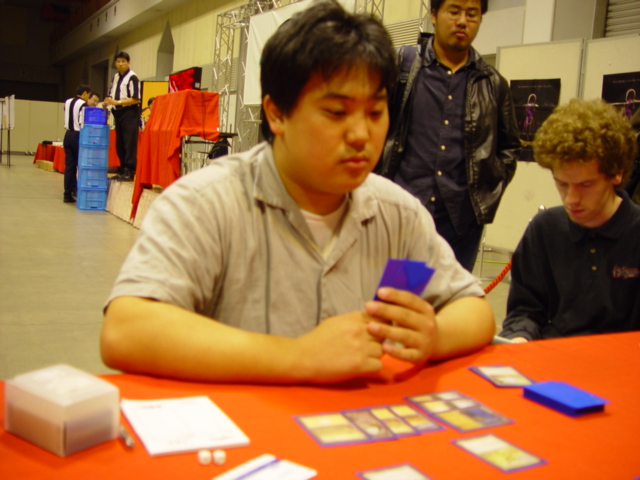 At 6-1, Jin Okamoto decided his deck was worth one more round. His three byes had helped give him the hightest tiebreakers of those with eighteen points, and he was confident he could handle whoever was put in front of him. That wasn't the case with Yuji Otsubo, who would rather have taken a draw.

He started the dance with a Daru Healer, quickly dispatched by Okamoto's Chain of Plasma. Okamoto dropped a morph, and Otsubo's only answer was Sigil of the New Dawn. That let Okamoto reveal Haunted Cadavaer and leave him with just Gustcloak Harrier in hand.

He drew Sunfire Balm and waited to cycle, making sure he had five land before busting out the Harrier. Okamoto made a Fallen Cleric and passed it back. Otsubo cycled into plains, and then drew Pearlspear Courier. They each played their dudes, Otsubo Harrier and then Pearlspear, and Okamoto a morph. With just the fresh Courier on defence he cleared a path with Lavamancer's Skill. Then he hired a second morph.

Things were not rosy on the Otsubo side of the table. He left his Harrier on defense and turned it over. Erratic Explosion passed two lands before hitting Shock. Okamoto had to settle for two less damage, finishing it off with the morph. Sparksmith made sure things would be clear on the next swing. Otsubo hoped his Harrier would be enough. He figured it wasn't when everyone hit the Red Zone. He blocked the Cleric and Okamoto tapped out to reveal Towering Baloth for the kill. 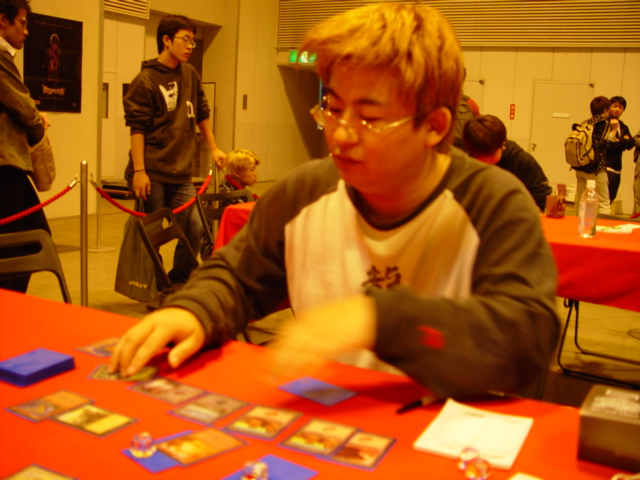 Game two started with a Sparksmith from Okamoto, bad news for Otsubo. It didn't help that he was land flooded. He made a try at it with Severed Legion and Gustcloak Harrier, but Okamoto had a mystery creature and Erratic Explosion to take care of the bird. Otsubo swung for two more, with Cruel Revival at the ready. Haunted Cadaver took the other three cards in his hand, all lands.

Okamoto followed up with a no-surprises Headhunter. This time the Legion stayed on defence. It traded for the Headhunter thanks to the Sparksmith, and was replaced by a morph. Otsuba evened the score with Cruel Revival. Next he tried Grassland Crusader, but Okamoto was ready with Pinpoint Avalanche. His Legion was trumped by Okamoto's Anurid Murkdiver. Without a solution to the 4/3 swampwalker, he could not survive.