Good friends Joe Weber and Ed Fear faced off in this feature match pitting Joe's Necro-Donate Deck vs. Ed's lake fueled Hatred Deck. Ed remarked in the early beginning that this match was basically decided on who won the coin flip given the extremely quick nature of both decks. Unfortunately for Ed, Joe won the flip and started off game 1. 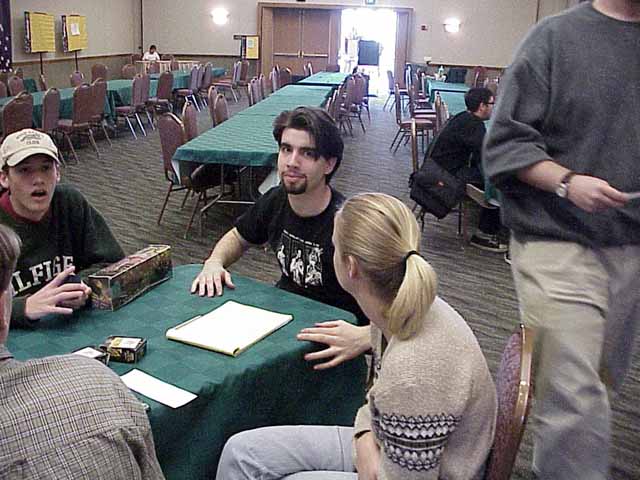 Joe started off playing a gemstone. Ed responded by laying a swamp and unmasking Joe discarding a Dauthi Slayer. The Unmask was Force of Willed by Joe. Joe then laid a swamp and passed the turn, not the lightning quick start that was advertised before the match. Ed continued his assault on Joe's hand by laying another swamp and Duressing Joe. Joe responded by consulting for a Necropotence (getting it about 8 cards down into his library), then brainstorming and then finally showing Ed 4 land.

On Joe's next turn, he draws the Necropotence that he hid using the brainstorm, casts it and drew 15 cards going down to 4 life. Ed tapped a black mana into his pool on his turn, laid a Lake of the Dead, tapped his remaining swamp, cast a Dauthi slayer, sacrificed his swamp to the lake and cast unmask. Joe shrugged and Force of Willed pitching a brainstorm and going down to 3 life.

Joe then went for the kill, casting a Mox Diamond discarding a badlands, playing an Underground Sea and casting an Illusions of Grandeur. He promptly used the lifegain to draw another 20 cards and then using his excess cards to Firestorm the lone Dauthi Slayer and Ed for 2. On his turn, Ed laid a swamp, consulted for an unmask, sacrifices the swamp to the lake of the dead and cast another unmask in the hope of snatching the donate. However, Joe had his 3rd Force of Will ready for the unmask. After a donate from Joe, Ed conceded. 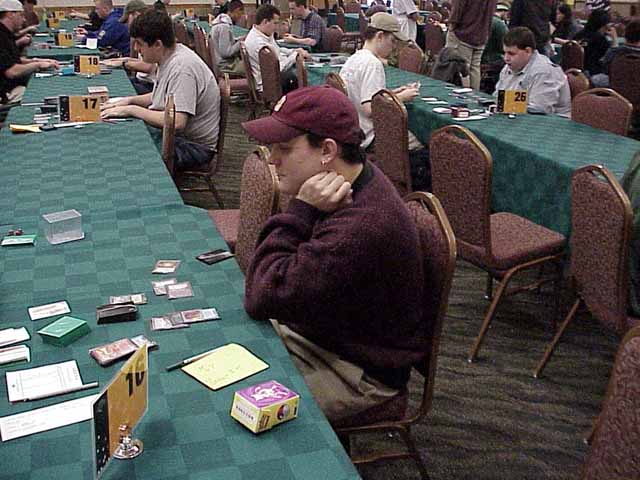 Ed started game 2 off with unmask, removing snuff out from the game. (which incidentally was the only one left in his deck after sideboarding) Joe shows 2 Vampiric tutors, a brainstorm, a donate and some land. Ed takes the donate and then plays a swamp and a Carnophage. Joe top decks a mana accelerating Mox diamond, plays it discarding a gemstone mine and then plays an underground sea. Ed responds by attacking with his Carnophage, and then playing a swamp and Dauthi slayer. During Ed's end step, Joe Vampiric tutors for a firestorm, then brainstorms to get it into his hand. He then laid a swamp during his turn and passed to Ed.

Ed upkeeps the Carnophage and draws, asking for bystander to blow on the card for good luck. He picked it up, and gives a big sigh and then attacks with both his creatures. Joe looks at his life total for a bit considering what Ed might have in his hand and finally firestorms both creatures, emptying his hand. Ed throws his hands up and casts a Sarcomancy. Joe draws the Necro he put on top of his library with his last brainstorm, casts it, and draws 12 off of it, discarding 4 lands and a Necro.

Ed knocks on his deck once more draws and looks visibly upset and simply attacks for 2. Joe then casts a Mox Diamond, plays a swamp and an illusions of grandeur. Ed concedes showing a hand of 2 Forsaken Wastes and a Kaervek's spite. If he had only drawn a swamp one turn earlier, he could have stopped Joe from gaining life from the illusions and even could have won the game by spiting Joe out.