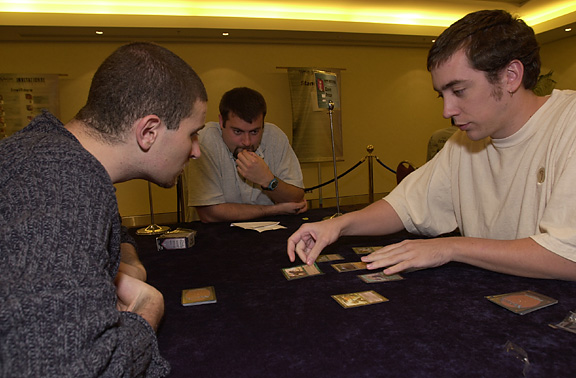 Dispelling the myth that he always draws the perfect mana, current World Champion Jon Finkel was forced to double mulligan to begin game one as he did not draw a single land in any of the first 13 cards. His five-card hand had three different basic lands, Orim and Preferred Selection - which is about as good as can be expected. Jon played Preferred Selection turn four, Spidersilk Armor turn five and Radiant, Archangel on turn six to give him a slow but steady start.

Internet darling Dave Price, with his self-described "beatdown deck," cast a turn three Fervor and then played land after land for the next five turns. An Agonizing Demise with kicker dealt with Radiant but it wasn't until turn nine and his second forest that Dave cast his first creature - Jerrard of the Closed Fist (not to be confused, of course, with Gerrard of the Weatherlight).

Despite selecting from two cards each draw phase, Jon couldn't recover from his initial double-mulligan as Dave continued to cast creatures, Dark Banished Jon's Orim, and attacked with Fervored haste to overwhelm him.

Dave got a very similar start in game two casting turn three Fervor but this time he had some creature backup as he cast turn three Squee and viciously assaulted Jon for one point of damage. Jon Harrowed to get his third and fourth colors and cast Radiant, Archangel. Dave missed his fourth turn land drop, but got right back on track on turn five and Pillaged Jon's only blue source. Jon was holding a variety of blue cards that he could no longer cast, and so he played the slightly overcosted Treefolk Healer.

Dave continued the obscure Legend beating by bringing out Sunastian Falconer who traded with Radiant Archangel - certainly a worthy exchange from Dave's perspective! But Jon had a plan and Disturbed Burialed with buyback to get the Angel back. Dave kept up the pressure by playing Karn, Lightning Blast and Mirri to get a bunch of hasted damage through but Jon kept up by casting Radiant every other turn.

Dave finally played a true monster - a 10/10 Multani, Maro-Sorceror. Multani was extra large due to the five uncastable blue and red cards in Jon's hand. Multani was joined by a Shambling Strider the following turn as Jon drew Ray of Command but without the Island that Dave Pillaged on turn four, he was unable to do anything as he takes massive damage from hasted creatures and loses the game to giant green creatures.

In both games, Sliver Queen sat waiting in Jon's hand for the right mana as he attempted to play five colors in this draft. Jon felt he could pull it off with Sol Grail, Fertile Ground, Harrow and Phyrexian Lens, but he continued to pay the price (pun intended!) as he always had unplayable cards in his hand as he died. Dave and Jon are now tied at 6-2 along with Noah Boeken.