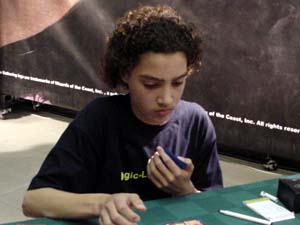 is the new big thing in the Netherlands looking for his breaktrough on the international stage. Ruel needs no introduction.

First thing Olivier does is showing me a card in his hand he thinks is so bad: a Bane of the Living. His first real plays are a Vine Trellis and a Solemn Simulacrum.
Julien has 2 Goblin Sharpshooters and suddenly the Bane isn't that bad anymore and takes out both Sharpshooters at the cost of a Solemn and the Bane himself.
Julien has a Siege-Gang commander though to recover the losses a little.
On his next turn Oliver kiles a Chrome Mox and a Great Furnace with the Wirewood Symbiote - Viridian Shaman combo.

A Warchief and the third Sharpshooter come down and Julien starts to shoot Olivier's creatures down. Good plan until Olivier drew an Oversold Cemetery and started recurring his creatures. With Olivier still on 13 and a recurring Bane of the Living all Julien could do was scoop up his cards.

Julien started out with a mulligan but kept his 6 card hand game 2. Not a very good one though as he only plays 2 lands and a Sledder.

When Olivier looks at his opening 7 he starts laughing saying he's so bad; he forgot to board out his Death Clouds, which are really bad in the matchup against Goblins.
Olivier has a good start though with Oversold Cemetery, Pulse of the Tangle, Viridian Shaman ( killing a land in the proces ) and a Skullclamp.

Once Julien is up to 3 land again he is able to play 2 Sharpshooters.
Olivier's whole team gets shot next turn but he's able to draw 3 cards off the Solemn combined with a Skullclamp….which gave him his one Bane of the Living that is in his deck. 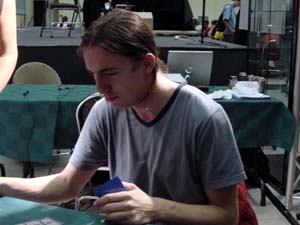 Julien sac's all of his Goblins in order to save 1 Sharpshooter. All of his hopes to go into day 2 undefeated get shattered as Olivier plays a Ravenous Baloth next turn. Since Olivier has an Oversold Cemetery in play and Julien doesn't have anything to remove the Cemetery Olivier takes game and match.