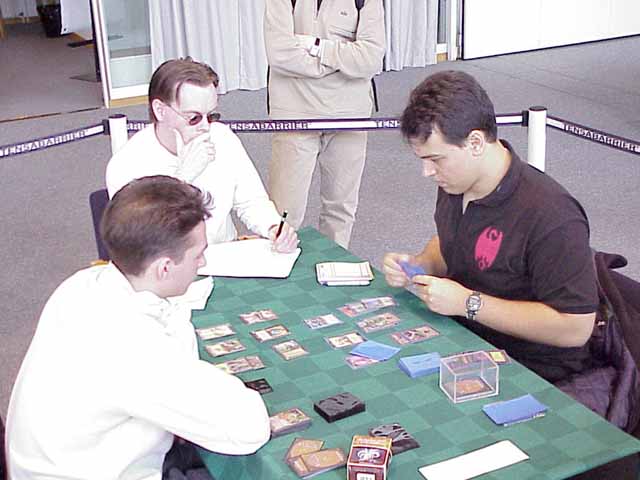 Round 8 and Pro Tour regular Justin Gary (USA) was paired up against the Austrian Benedikt Klauser. Klauser was the semi finalist at this year's World Championship. In the draft they'd sat next to each other and drafted co-operatively, making it unfortunate that they'd been paired together. Klauser had drafted G/W with splash U and had a number of useful rares such as Sabretooth Nishoba and Attalya. He'd also opted to play Meteor Shower with a number of sources to give him the red mana. Gary had drafted a R/B splash blue deck with a fantastic amount of removal.

Game 1 and Klauser went first. Both started with annoying creatures, a proc black Llanowar Knight for Klauser and a proc white Shivan Zombie for Gary, which proceeded to run past each other. Klauser laid a Trapper that Gary removed with Exotic Curse. Klauser had a second tapper in a Thornscape Apprentice and he pumped this up with a Monstrous Growth to remove Gary's Zombie to keep the edge in the race. Gary tried to keep up with Battleflies and a kicked up Urborg Skeleton, but Klauser still had the Thornscape Apprentice to control the board. Then Gary found his 5th land and dropped a Pouncing Kavu. He followed this with a massive Zanam Djinn. Klauser bounced it at end of turn but he really needed to see another attacker to go with the Knight. He was finding only land though and Gary was able to swoop in with the Djinn and then finish Klauser off with a Breath of Darigaaz.

Game 2 and Klauser had the opposite problem. He made a Quirion Elf (W) on turn 2 but got no advantage as he saw no land on turn 3 and had to make a Verduran Emissary without kicker. Spotting he was having problems Gary recoiled the elf to really slow Klauser down. He then laid his first attacker, a Duskwalker with kicker. Klauser still didn't have a third land, but he used the elf to make a Seashell Cameo to solve the mana problems and then cast a Trapper to deal with the walker. Gary gave the impression he was short of his sixth land (he wasn't, it was a ploy to encourage the Austrian to overextend) and tried to Annihilate the Trapper. Klauser saved it with a Stand/Deliver and then cloaked up the Emissary to give him considerable life advantage. A Shivan Emissary took care of his green counterpart, but probably wished it could have arrived later when the Armored Guardian hit the table. Gary's deck did have an obscene amount of removal though and next turn Klauser was told to Do or Die. The Guardian died over the elf and Trapper, exactly as Gary wanted as the Trapper then fell victim to an Exotic Curse. He was low on life though and wasn't happy when Meteor Storm and the Nomadic Elf to use it hit the table soon after. Plague Spores ensured Klauser wouldn't keep the red mana to activate it but when Gary attacked with a Zanam Djinn and Duskwalker he was hit by Tangle to really slow him down. He quickly made some Battleflies and a 2nd Duskwalker with kicker to give some defense. When Klauser attacked with the Quirion Elf and a Llanowar Knight Gary couldn't remember the kicker cost for Monstrous Growth but decided to block the Quirion Elf anyway to be safe. Klauser couldn't have afforded the kicker but used Growth anyway to trade off elf with walker to prevent Gary from killing him next turn with an all-out attack. Gary was on 4 but Klauser needed to lay the last card in his hand, a nomadic elf, to give him red mana for the Shower, but not leaving him any cards in his hand to use it. Gary killed him with the Djinn and Duskwalker before Klauser could draw up to 2 cards.