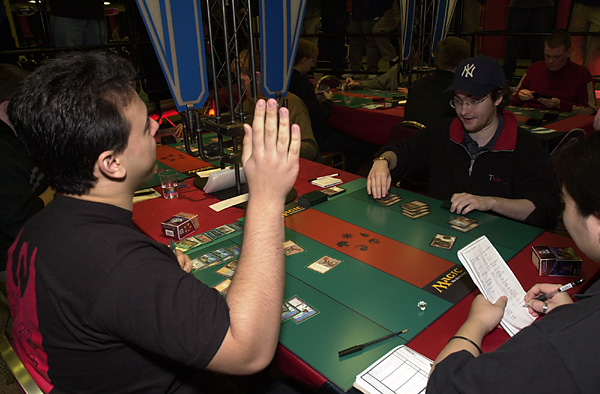 After the players, the staff, and the judges had at least attempted to get a good night's sleep, everybody arrived at the Pro Tour site in the inner regions of the Hyatt Regency Chicago to see the top 96 players fight for a slot in the playoff. During the first round of the second day, seven Europeans and one lone American entered the feature match area to battle it out in front of eager spectators. The American was Justin Gary, and he was facing England's Tony Dobson.

Gary was with a blue and white control deck with countermagic, library manipulation, Wrath of Gods and Blinding Angels for the kill. Dobson was one of five players in the tournament sporting a white/black rebel deck. He had at least Snuff Outs and a Rebel Informer main deck, and after sideboarding, his deck became pretty powerful in the mirror matchup as he had Tsabo's Decree and Vampiric Tutors.

"The Red Zone" is probably one of the hottest new expressions of this Pro Tour, and after the initial red zone buzz when the eight players shuffled up, things settled down a bit although the red zone chat continued over the course of the match between Gary and Dobson. The two players both rolled a four on their first attempt, and Dobson rolled a four yet again. However, Gary managed to roll a fiver and chose to play first. His opening hand contained a Coastal Tower, two Adarkar Wastes, a Wrath of God, an Accumulated Knowledge, a Counterspell and a Reviving Vapors, and he chose to keep it. Tony kept his hand as well; it contained three lands, a Lin Sivvi, Defiant Hero, a Seal of Cleansing, a Snuff Out and a Ramosian Sergeant.

Justin played lands only during his first two turns, while Tony dropped a turn one Sergeant and a turn two Seal of Cleansing. Gary cast Accumulated Knowledge during Tony's end of turn step, and then he continued to play lands. The Englishman got up to three mana, and at the end of Gary's fourth turn, he used the Sergeant to search for a Ramosian Lieutenant. Justin played Reviving Vapors, flipping over three lands. Complaining a little about that being his worst Vapors ever, he picked an Island.

Dobson used his Lieutenant to get a Lin Sivvi, Defiant Hero into play, and his following attack took Justin down to 17 life. So Justin decided it was time to cast a Wrath of God to get rid of the annoying rebels on the table. Dobson needed to get out more threats to keep up the pressure. First, he attempted to cast the Lin Sivvi he had been holding in his hand since the start of the game, but it was Counterspelled. But then he dropped a Chimeric Idol. 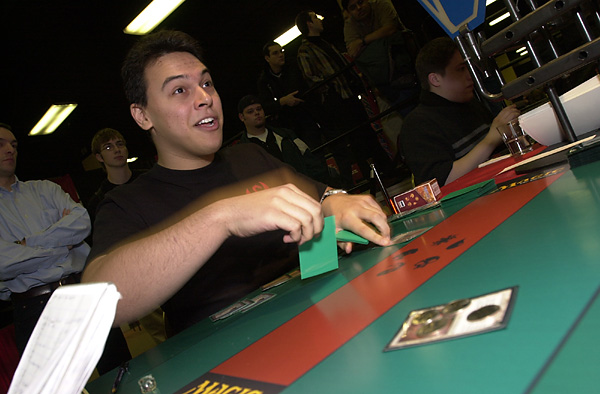 Gary didn't have any answers to the Idol. He cast Accumulated Knowledge for two this time, but took three from the Idol. He cast another Accumulated Knowledge for three, but the Idol kept attacking him, knocking him lower and lower on life. Dobson attempted to play a Parallax Wave, but it was Counterspelled, but that didn't stop the Idol onslaught. Justin was down to one life only when he finally topdecked a Dismantling Blow. So when Dobson tried to attack for the kill, Justin cast his Dismantling Blow, and Dobson Sealed it in response to prevent Justin from drawing cards.

Since a player has to tap all their lands in order to activate a Chimeric Idol, Dobson was all tapped out and he couldn't do anything after the Idol was dead. So Justin got to untap, and he was all ready for whatever would come when Dobson got to take his next turn. The Englishman cast a Rebel Informer, but it was Absorbed, and Gary was back to four life. A Defiant Falcon came into play, but Justin used a Wrath of God to get rid of it. Lin Sivvi was then Absorbed, and Justin was at seven. A Parallax Wave resolved, but at that time, the American was ready to start his own offence.

Gary cast three consecutive Blinding Angels and started attacking. Tony soon found himself at eight life and deprived of multiple attack phases. He tried to Snuff Out one of the Angels, but Justin Absorbed it and went up to ten life. Tony then won a turn by fading out two of the Angels, but his Ramosian Sky Marshall was Foiled and the Angels soon finished off what they had started.

Both players did some heavy sideboarding. Gary sideboarded in a whole rebel chain with four Sergeants, a couple of other weenies, a Lin Sivvi and a Rebel Informer. Dobson first removed his four Parallax Waves for a Dust Bowl, a Disrupting Scepter and two Armageddons. Then, after some thinking during which Gary reminded him that he had only one minute and about forty seconds left of his sideboarding and shuffling time, he chose to remove his Chimeric Idols as well in favor of another Dust Bowl, a Mageta, the Lion and two Defiant Vanguards.

Tony played first in the second game. His opening hand had three Plains, a Steadfast Guard, a Disenchant, a Defiant Vanguard and an Armageddon. Gary drew an Island, a Coastal Tower, an Adarkar Wastes, a Plains, a Dismantling Blow, a Blinding Angel and a Foil. Both players chose to keep their initial hands.

Tony played two lands, and a turn two Steadfast Guard. He then cast a turn three Defiant Vanguard and commented: "I'll put it in the counterspell zone." But the Vanguard resolved, and Gary went on to cast his first rebel of the day, a Defiant Falcon. Then, Dobson dropped a land and cast Armageddon. But Gary figured that he had to use the Foil to counter it, and he discarded the Foil, a Blinding Angel and an Island to save his lands. He then played an Adarkar Wastes before Dobson untapped and attacked. Gary searched for a Lin Sivvi and blocked the Steadfast Guard. Then, the Englishman cast another Armageddon. However, Gary had drawn into another Foil, and he emptied his hand to counter the spell.

Dobson did nothing during his following turn, while Gary searched for a Rebel Informer. The Englishman then played another Steadfast Guard, while the American chose to put Dobson's Vanguard on the bottom of the Englishman's library. He then searched for a Ramosian Sergeant and attacked with his Defiant Falcon.

However, Dobson had drawn even more of his sideboard cards, and he cast a turn eight Mageta, the Lion. Gary didn't have a counterspell, so he started putting his own rebels back into his library. Then, two turns later, Dobson activated his Mageta during Gary's end of turn step. Gary put his Informer on the bottom of his library, and the rest of the creatures died except from the Mageta.

Finally, Dobson could start attacking again, and he also dropped another sideboard card - a Dust Bowl. He then started nibbling at Gary's non-basic lands. Gary got out a couple of small rebels that could block, but Dobson hard cast a Ramosian Sky Marshall and Gary died a few turns later.

The two players had twenty minutes left before the last game, but they both played quickly. Gary's opening hand held two Islands, a Coastal Tower, an Adarkar Wastes, a Counterspell, a Blinding Angel and a Wrath of God. Dobson kept his hand consisting of three Plains, a Steadfast Guard, a Ramosian Lieutenant, an Armageddon and a Ramosian Sky Marshall.

Gary played lands only during the first five turns, while Dobson got out a turn two Ramosian Lieutenant and then searched for a Lin Sivvi during Gary's fifth end of turn step. He then dropped a Dust Bowl as well. Gary had two Wrath of Gods in his hand, but only two white mana sources - an Adarkar Wastes and a Coastal Tower. He chose not to Wrath away the Lin Sivvi and the Lieutenant though, and so Tony searched for a Ramosian Sergeant as well before starting to destroy Gary's white mana sources.

After Gary had played an Island, Dobson sent his rebels over again after searching for a Sergeant. Again, Gary cast Fact or Fiction during Dobson's end of turn step, and this time he flipped over a Plains along with a Coastal Tower, an Adarkar Wastes, a Lin Sivvi and a Ramosian Sergeant. Gary thought for a while, then he chose to take the basic Plains. He then topdecked Tsabo's Web which he cast after playing the Plains. Then, after Dobson's attack had taken him down to nine life, he drew a second Plains and cast Wrath of God. In response, Dobson Disenchanted the Tsabo's Web so that he would get to untap his Dust Bowl.

Dobson attempted to Snuff Out the Angel, but Gary Counterspelled it. The Englishman then got out a Lin Sivvi, but as the Angel attacked every turn, he wouldn't be able to attack. So he searched for a blocker - a Ramosian Sky Marshall. But Gary didn't approve, and he cast Wrath of God during his following turn.

Dobson played a Steadfast Guard to try and get back into the game, but Gary had another Blinding Angel which he cast and started attacking. The Englishman desperately tried to survive by playing Armageddon as he had a Snuff Out in his hand, but Gary Foiled it. Dobson then played a totally useless Rebel Informer and he also tried to Snuff Out the Angel before dying, but Gary had yet another Counterspell and Dobson scooped.