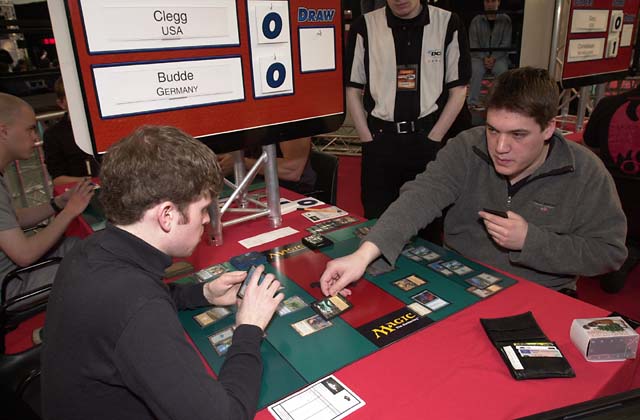 Warning: Many creatures get repeatedly returned to owner's hand during this match

Clegg opened with Galina's Knight. Budde played his Plains on the second turn and cast a Stormscape Apprentice, managing to hide the fact that he was playing black until turn three, when Ravenous Rats entered play. Clegg discarded a Hunting Drake, not expecting any more colors out of Budde. A turn four Stormscape Master could become a major problem for the German player. He attacked with the Rat, and Clegg did not risk losing his Master to a potential Cursed Flesh, taking the damage instead. Budde cast a Morgue Toad.

Over the next several turns Budde gained card advantage, drawing three off Allied Strategies, but his board position was getting worse. Sunscape Master bounced the Apprentice, and was soon joined on the table by Sea Snidd and Spirit Weaver. Budde was able to summon several of his own "dorks" - a Darigaaz's Attendant, and a Hunting Drake. Clegg took a while during every one of Budde's end steps deciding on which creature to return to Budde's hand. Clegg is known for generally taking his time when he plays, and the delays rattled Budde a bit. Budde himself was playing rather quickly, but he did have fewer decisions to make. Budde finally drew a card that could help him break out of the stall. He cast a Vodalian Serpent with kicker - a major threat since Clegg also played Islands. Clegg chose to play aggressively, bouncing the Serpent mainphase and casting Shackles on an untapped Apprentice after having attacked for three with a Sea Snidd.

Budde had an excellent answer to that. On his turn he Repulsed the tapped Master and recast a kicked Serpent, bringing Clegg down to 16 life with his two creatures. Clegg re-cast the Master. He needed more Islands, so he could use the Master ability and eventually cast a Faerie Squadron he was holding in hand. Clegg used his two land-change creatures to get rid of his Islands, preventing the Serpent from attacking. Budde was in total aggression mode - he Recoiled the Master, and cast a Phyrexian Bloodstock.

Clegg cast Faerie Squadron with kicker rather than playing the Master yet again. Budde's next attack brought Clegg down to eight - he traded his Squadron in combat for the Bloodstock, hoping to safely recast his Master afterward. Budde had a Recover though, and before the turn ended, Bloodstock was in play yet again.

Clegg was forced to recast the Master anyway, but Budde was not out of bounce yet. He cast Urborg Emissary with kicker, sending it home, attacking again, and re-summoning the Attendant. Clegg, who was still at five mana, could not recover from this kind of tempo advantage. Although the early stages of the game looked very bad for Budde, he managed to recover and achieve a very impressive win.

Clegg started the game aggressively, casting a second turn Spirit Weaver, then a fourth turn Prison Barricade with kicker. Budde did not have any creatures he could cast yet, so he Repulsed the Barricade and used Soul Burn to take out the Weaver.

Finally up to five mana, Budde summoned Darigaaz's Attendant. Clegg was still able to attack for three on the following turn, after he cast Lashknife Barrier. He also summoned a Galina's Knight.

With a white creature in play, Budde summoned a Phyrexian Bloodstock. He chose not to block Sea Snidd again though. Clegg conceded to the inevitability of losing a white creature to the Bloodstock eventually, so he summoned several more - a Spirit Weaver and a Prison Barricade. Budde gated his Bloodstock with Marsh Crocodile, getting rid of Spirit Weaver and a land in each player's hand. On his turn, Clegg regained card economy by casting Probe and forcing Budde to discard two Recoils, leaving Bloodstock as the only card in his hand. Crocodile ended up being traded in combat for Galina's Knight, and Bloodstock re-joined the party. Clegg Recovered and cast a Spirit Weaver.

Budde's Recover was "slightly" better. He used it to get back Marsh Crocodile, threatening to gate Bloodstock again sometime soon. This turn however, he cast Benalish Heralds. Clegg used Recoil on Benalish Heralds, forcing Budde to discard a Ravenous Rat, then cast Disciple of Kangee. Disciple's ability to turn creatures blue when giving them flying could counter Bloodstock's ability to kill white creatures in the future, so Budde needed to kill it right away. 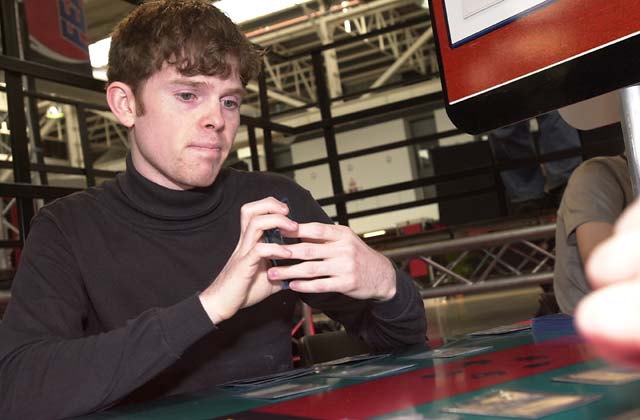 Budde recast the Heralds, and then cast Marsh Crocodile. With no cards in hand, he was able to use a cool timing trick - he put gating on the stack first, then put discard on the stack. When discard ability resolved, he had no cards in hand while Clegg was forced to lose a card. After that, Bloodstock was returned to his hand, taking out the summon-sick Disciple of Kangee in the process.

Clegg drew and played a Sunscape Master. Budde drew a Bog Down, which helped him remove Clegg's Hobble, leaving both players in topdeck mode. Clegg's Master was busy bouncing Benalish Heralds and making sure that Budde does not get to draw more cards. Both players were waiting to draw a flying creature, as nothing on the ground was likely to break the stall. Clegg drew a tapper and had to decide between allowing Budde to draw a card with his Heralds or keeping the tapper in hand. He chose to cast the Stormscape Apprentice. Budde used the Heralds to draw Metathran Zombie. >On the following turn, Budde finally drew an Urborg Emissary, bouncing his Bloodstock and finally taking out the Sunscape Master.

With the two players tied at ten life, Clegg now attempted to play aggressively. He used the Apprentice to drain one life per turn away from Budde's total, and finally summoned that flying creature he was waiting for - a Faerie Squadron. Budde was now drawing two cards per turn thanks to Benalish Heralds. He drew three more with Allied Strategies but could not find an answer in time. "That Probe won you the game," commented Budde. Clegg agreed.

Only ten minutes were left in which to play game three. Clegg boarded in a Collective Restraint - a card that could help him achieve a draw if Budde got an advantage in game 3.

Clegg was happy to see his sideboard card in opening hand. He also drew his other power enchantment - Lashknife Barrier - and cast it on turn 3. Budde was playing extremely fast now, and Clegg picked up his pace a little, but not enough. Judge Rune Horvik prompted him to discard faster, when Budde used a Recoil on the kicked Prison Barricade at the end of next turn. Clegg decided that his draw was aggressive enough, and since he saw no creatures on Budde's side of the board, Collective Restraint ended up in the grave. Budde was riding the card advantage angle hard. He cast Allied Strategies on turn 5 drawing three cards, then Bog Down with kicker on turn 6, forcing Clegg to discard three. He also summoned a Morgue Toad, his first creature played.

Clegg summoned a Master. Budde Repulsed, having his Toad race against the kicked Prison Barricade. Things looked very grim for Budde despite all the extra cards he had drawn. Clegg continued to play quality creatures like Stormscape Apprentice, and his Sunscape Master was now online, bouncing Budde's largest blocker - Darigaaz's Attendant.

Clegg used Shackles to keep Tower Drake tapped, but Budde kicked an Arctic Merfolk to send Shackles to the graveyard. Another cool timing trick - since returning a creature is part of the kicker cost, it cannot be responded to, so Clegg was unable to return his Shackles. Unfortunately for Budde, Clegg had a second Shackles in hand, so Tower Drake was soon tapped once again.

Budde finally drew a Cursed Flesh to kill Stormscape Apprentice, but Clegg topdecked yet another Apprentice, and had an Aurora Griffin to back it up. At this point time was called. Budde could no longer realistically win, but he could try not to lose within the next three turns. Budde bought himself some breathing space by casting a five point Soul Burn on Prison Barricade. With Lashknife Barrier in play, it was enough to kill the 2/4 creature and gain him some life. 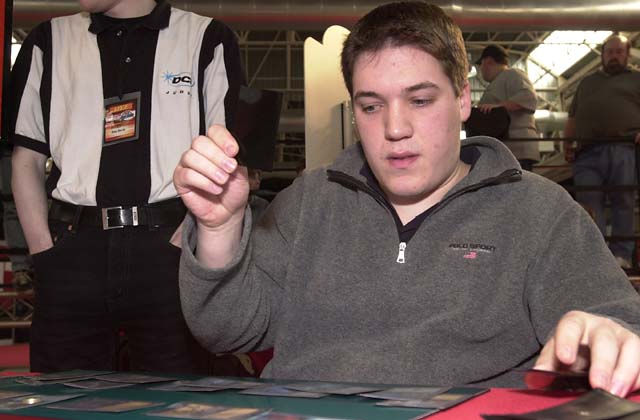 Clegg drew a pair of lands in a row. He was able to deal two points of damage every turn with an Aurora Griffin and drain Budde for one every turn with a Stormscape Apprentice, but it wasn't enough. With only one turn left in the game, Budde was still at five life and Clegg was holding three lands in hand.

Budde tried to cast a Marsh Crocodile, and it was Clegg's turn to pull off a cool play. He used Aurora Griffin to turn other creatures white, preventing Budde from gating either the Shackled Tower Drake or Arctic Merfolk.

Clegg drew a Hunting Drake on his turn, only able to bring Budde down to two life, ending the match in a draw.