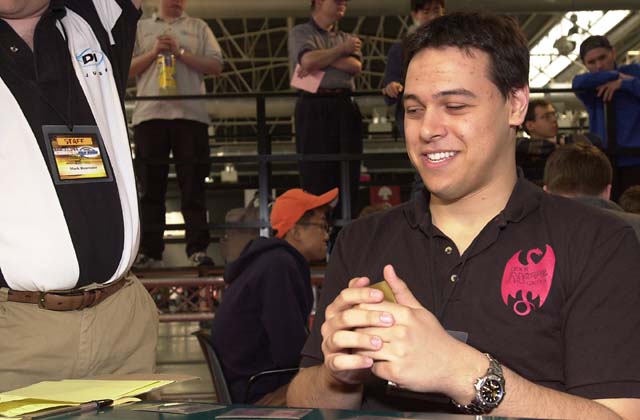 Both players sat down to play round 8 after starting the tournament 5-2. Both of these guys are well-known players on the Pro Tour, and while it's hard to call Kamiel a "veteran," he certainly is one of Magic's rising stars.

There isn't a whole lot to say about game 1 other than it was an absolute beating by Kamiel. He managed to pull off a rare sixth turn kill, something not often seen in Limited games. Kamiel's start looked like this: Forest, Mountain Quirion Elves, Horned Kavu, replay Elves, Swamp, Kavu Monarch, Forest Serpentine Kavu, Terminate Justin's blocker and kill him. Funny thing is, this wasn't even the fastest win Kamiel has had this weekend, mentioning yesterday how a 4th turn Dromar caused a concession. And people say R&D slowed the format down. 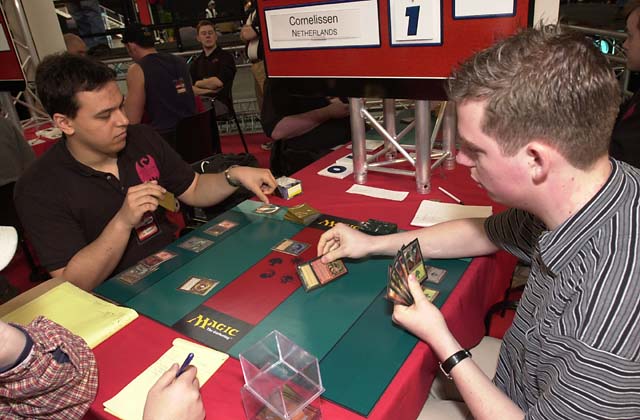 The second game was a much different story however, as things started out much better for Justin, and much less quickly for Kamiel. After a pair of 2 mana 2 power creatures for Kamiel, Justin stabilized with a Trench Wurm, and went to town on Kamiel's Tinder Farm.

After some minor attacking and blocking, the board ended up clear around turn 6, and after a Plague Spores cleared Kamiel's Kavu Climber and Swamp, Justin dropped his own bomb, Shivan Wurm. Kamiel fought the good fight, even managing to kill the giant monster once, but Gary simply Recovered it, and looked to be in great shape as he played out a Viashino Grappler, readying to replay the giant Wurm next turn.

Kamiel had the answer in the short term though, as a double-kicked Thornscape Battlemage took out the Grappler and a Star Compass. Things were looking grim for Gary, until he pulled one of the most miraculous Ravenous Rats of all time, grabbing Kamiel's remaining card in hand: Breath of Darigaaz. This allowed Gary (who was residing at a scary 2 life), to stabilize and a Sinister Strength enhanced Shivan Wurm (10/8!) finally made an appearance to take Kamiel out in game 2. 10/8 black tramplers are good, I hear. 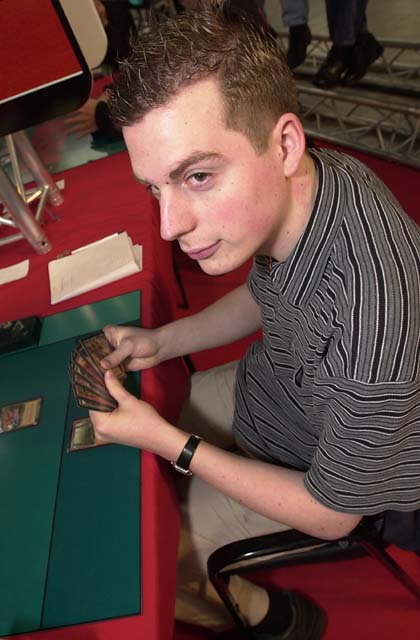 With the match on the line, Kamiel commented on how that last game got away, and chose to play first. Both players came out slowly this game, with the first play of the game being Gary's Trench Wurm. Kamiel finally started to play creatures, and play some good ones. Voracious Cobra, Serpentine Kavu, and Kavu Monarch. Gary was not fazed, however, as he used Plague Spores and Trench Wurm to keep pressure on Kamiel's mana, while removing some of the huge creatures.

Kamiel looked to be in great shape when a Breath of Darigaaz sent him to 8 and Justin to 10, with the only remaining creature in play being a 5/5 trampling Kavu Monarch. Kamiel looked hopeful when Gary took his turn and simply played an Urborg Skeleton with the kicker, but after a Death Bomb took out the Monarch, we were back to square one. Kamiel was in dire straits after Shivan Wurm made another appearance, and even though things looked so promising only turns ago, he couldn't find the answer or the win in time, and lost to the giant monster for a second straight game.