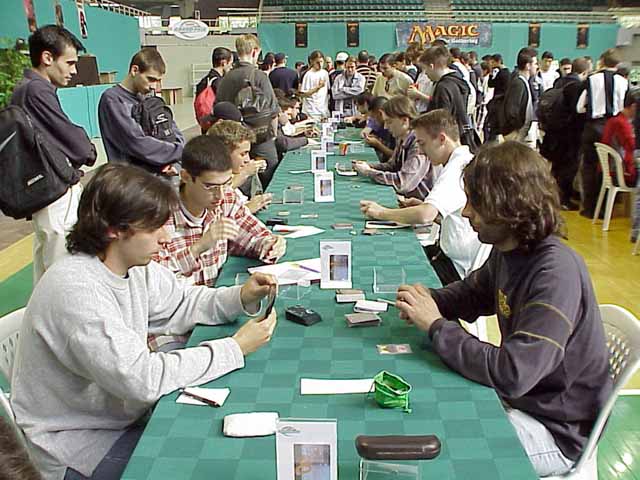 As the first round got on the way two of Portugal's up and coming players faced each other on table six. On what I would like to dub the "Battle of the Long Hair" Luis Sousa faced Bruno Ferreira. Luis Sousa had three byes coming into the Grand Prix from winning a recent Grand Prix Trial. Bruno on the other hand had to go through the long seven rounds of Sealed Deck playing a grand total of twenty games.

Their draft pod had a better time staying out of each others colours both Luis' U/R speed deck and Bruno G/B monster deck seemed really consistent.

As the first round started it was obvious we were in for a fast one. Bruno played a Plague Witch and a Silt Crawler while Luis dropped a Grappler. As Bruno tried to witch the Grappler away during Luis' upkeep, Luis not only saved it by tapping out, but used a Lunge to get rid of the troublesome witch and dropped a Seal of Fire. Bruno came back with a Lumbering Satyr but Luis found a Ridgeline Rager to trade (using also the Seal). Bruno again came back with a Rathi Intimidator and Luis brought a Stormwatch Eagle to what now seemed like a stable table. They traded damage but Luis found an Ancient Hydra to upset the balance again. Bruno fetched an Agent of Shauku (a.k.a. The Loaded Shotgun) to draw some counters from the Hydra. Sure enough Luis shot both creatures and attacked with the Hydra and played a Cloud Sprite.

But Bruno wasn't ready to give in yet. He tapped out to play a scary Avatar of Might! This seemed like a turning point but Luis didn't even blink and played a Kyren Negotiations! Since Bruno was low on life from the early beatdown and the Hydra work he had to find an answer and he need it quick. To keep with the theme of the round Bruno played a Squall to rob Luis of his two flyers. For a moment it looked like they would finally run out of steam but Luis would have none of that: in came a Flowstone Mauler. With the game slipping Bruno attacked with the Avatar and dropped a Blastoderm and a Rib Cage Spider. With the powerful red enchantment still ruling the game, Luis dropped the last creature he needed to finish the game.

The second one wasn't such a close one. Bruno was slightly colour screwed at the start and that gave Luis the time to round up a large army of small creatures to nibble at Bruno's life total. When he finally found his first Swamp the Plague Witch fought like a heroine to save the day but it was too late.