Round 8 Feature Match - Maioli vs. Felsberg 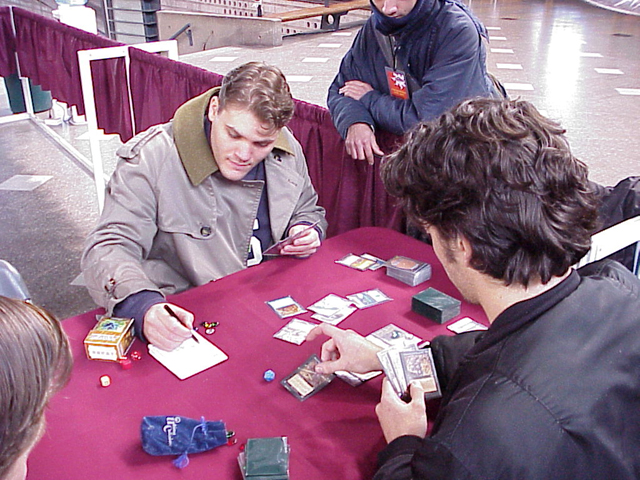 This round's feature match set Douglas Maioli (5-2) of Buenos Aires against Thomas Felsberg of Saõ Paulo, Brazil (5-1-1). The players shivered in the freezing air of the tournament venue as they sat down at their table. A space heater was brought out so that the two competitors would be able to play comfortably. "This heat is amazing!" Thomas exclaimed. "This is way better than money. I'm going to have to keep winning so I can sit at this table again."

Douglas was sporting a Flores Control Black deck, while Thomas was playing Replenish. In the first game, Douglas was unable to get the disruption he needed in the first few turns, and his Phyrexian Negator was no match for Thomas's combo. Using Attunement and Frantic Search to fill up his graveyard, Thomas played Replenish to bring several enchantments into play. Attuning twice more, he played a second Replenish and Douglas promptly conceded.

The second game was a little less one-sided as Douglas successfully disrupted Thomas's strategy in the first few turns. Starting with Ritual, Duress, and Skittering Skirge, Douglas proceeded to choke off Thomas's mana with Rain of Tears and Rishadan Port. Thomas managed to get an Attunement into play, but he was almost dead due to the relentless Skirge. His only land in play were two plains and an island, and Douglas tapped the island using Rishadan Port during Thomas's upkeep.

Thomas knew that this was his last opportunity to turn the game in his favor, so he activated Attunement in response to the Rishadan Port ability. He tapped his lands for mana and then used Frantic Search to untap them. When he drew, played a land, and cast Replenish, his opponent's jaw dropped. Thomas had begun the turn with no enchantments in his graveyard, but now he was bringing Opalescence, Seal of Cleansing, Attunement, and two Parallax Waves into play.

Light of Day hit the table on the next turn, and Douglas, visibly upset, decided to concede. Thomas Felsberg walked away beaming after winning the match 2-0.