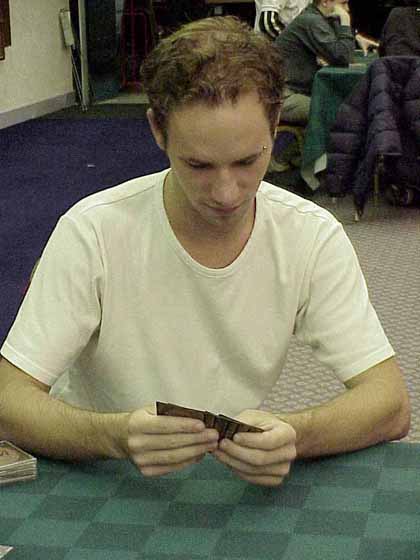 In the first round of the second day, Mark Le Pine faced Ryan Fuller at the feature match table. Fuller played first in game one, but he didn't exactly get the perfect mana curve. He dropped a Tinder Farm, a plains and a forest, then he missed his land drop and his first creature was a turn four Pincer Spider without kicker. Le Pine, on the other hand, got a rather nice start. He cast a turn two Ravenous Rats, and Fuller put a Yavimaya Barbarian into his graveyard. The rats attacked for one, and then Mark got out a turn four Trench Wurm.

During his fifth turn, Fuller attacked with his Spider, and, having drawn a fourth land, he summoned a Razorfoot Griffin. Le Pine wasn't worried about it though, he played a kicked-up Pouncing Kavu and hit for six, knocking Fuller down to 13 life.

Fuller failed to draw a fifth land during his sixth turn, and he held his Spider back to block along with the Griffin. But Le Pine had an Exotic Curse that killed the Griffin, and he then used the Trench Wurm's ability to destroy Fuller's Tinder Farm. Fuller sacrificed it in response and used the mana to Zap Le Pine's Pouncing Kavu, and when Le Pine attacked, he blocked with the Spider and then cast Explosive Growth to save his creature.

With only three lands in play, Fuller was happy to see a mountain on top of his library. He cast Tribal Flames to kill the Trench Wurm, and it could almost seem like he was stabilising the situation. However, Le Pine dropped his Crypt Angel and retrieved the Pouncing Kavu from his graveyard. Fuller had an Ancient Kavu, but it didn't help at all as Le Pine played Breath of Darigaaz with kicker, killing the Kavu and taking Fuller to nine life. Le Pine then attacked with his Angel, Recovered a creature, and during his next turn, he played the Pouncing Kavu with kicker before attacking for the last six points of damage.

The atmosphere of the game had been slightly tense during the first game, and it got even more tense during the second game. Fuller mulliganed, keeping his six card hand. Unfortunately, he missed his second land drop, while Le Pine again had a second turn Ravenous Rats.

Fuller drew and played a Tinder Farm during turn three and then a fourth turn Llanowar Knight, but that didn't really help much when Le Pine dropped a third turn Kavu Aggressor without kicker. Le Pine attacked with both the Aggressor and the Rats, and when Fuller blocked the Rats, he merely Recovered them and cast them again the following turn.

Fuller played a Hate Weaver only to see it be Exotic Cursed during Le Pine's next turn. The Kavu Aggressor brought him down to 13, and even though he knocked fiercely on his library before every draw, he just couldn't draw that third land.

Le Pine on the other hand, played a Pouncing Kavu and attacked for seven with his Rats and two Kavus. Fuller, now at six, sacrificed his Tinder Farm to Zap the Ravenous Rats, and finally he drew another land - but too late. Furious, he threw his hand on the floor and sneered "you win" before scooping: "See, you didn't have to counterdraft me. My deck was a [pile] anyway."