Both Murakami and Morita are undefeated, having fought their way to the top of the Swiss standings yesterday with Psychatog decks. 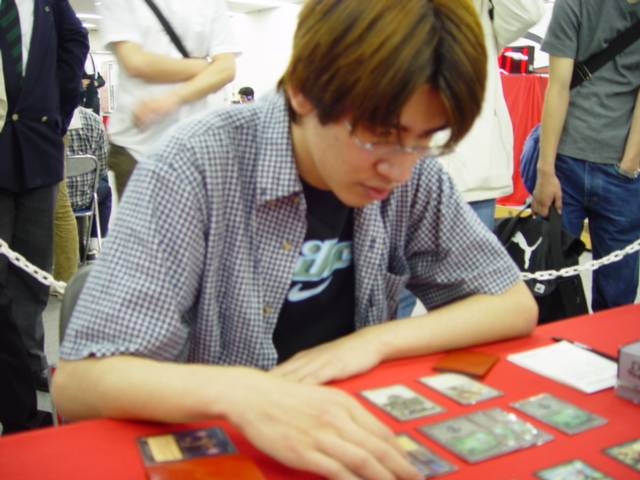 The match began with both players taking a mulligan. That didn't help Murakami much, as his second hand still only had one land. However, it was enough, allowing him to make a Diligent Farmhand, followed the next turn by a Basking Rootwalla. On the other hand, Morita's draw was suboptimal, with only 2 lands and a bunch of 4CC spells. Fortunately, he was able to draw into land, and established control over the game with a Battlewise Aven and Phantom Flock. By the time Murakami was able to draw another land, Morita had already taken over the game, Murakami conceded when Morita showed him the two Morbid Hungers in his hand. 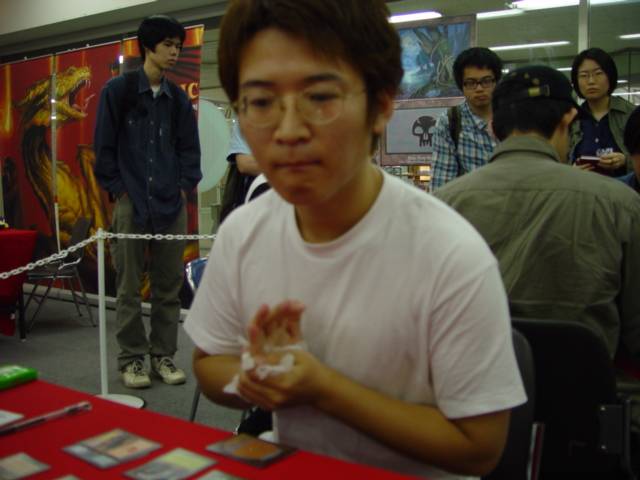 The second game started with Murakami playing a Rootwalla on the first turn, which quickly began whittling away at Morita's life total. Morita tried to stabilize with a Gravegouger and a Battlewise Aven, but they were quickly removed with a Swelter. The game was over in three minutes, with Morita conceding when Murakami played an Anurid Scavenger.

The deciding game started poorly for Morita, who was forced to take a double mulligan. Murakami showed no mercy, playing a first turn Rootwalla yet again, followed by a Nullmage Advocate and a Phantom Centaur. Unable to produce any kind of defense, Morita swiftly went under the assault of Murakami's green army. This left Murakami as the only undefeated player, just one win away from a guaranteed slot in the Top 8.