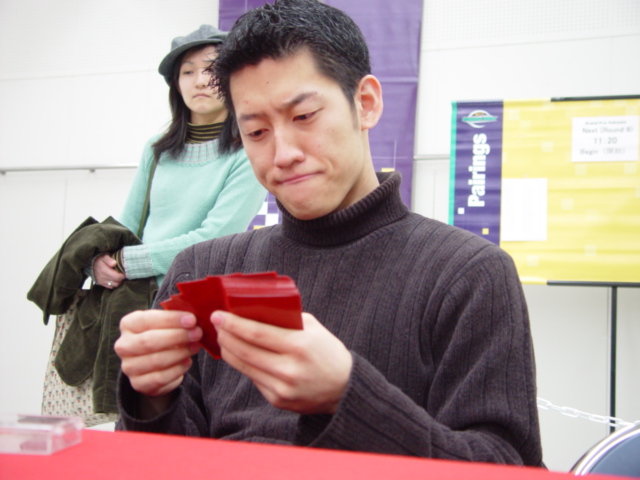 Masashiro KurodaRespected Japanese Sideboard reporter Masashiro Kuroda was all smiles as he sat down to the drafting table this morning. Yesterday he'd finished the day at 7-0, not even dropping a game. The draft was also kind to him, with his decision to go red-black handsomely rewarded. He boasts a strong removal line and as well as two Chainflingers and Chainer, Dementia Master. His opponent, Takao Higaki, was not as lucky. He also went red-black, but felt the squeeze. As a result, he's playing a lot of chaff.

The game started out inauspiciously for Kuroda, as he was forced to double-mulligan. His five-card hand held only a mountain. But then he exploded! Ripping a swamp, he dropped Barbarian Outcast on the second turn. Higaki, slow to start, had his Ember Beast felled by Chainer's Edict. He tried a Dusk Imp, but Kuroda also had Flame Burst.

Higaki's next play was Pardic Firecat, and he swung with it, planning to dispatch Kuroda before he could draw more lands. Kuroda wasn't about to roll over. He added Organ Grinder to his team. Higaki smiled as he put down Cabal Torturer. Kuroda had Chainflinger in hand, but he didn't draw the land he needed. He cast a sacrificial Dusk Imp to buy time. 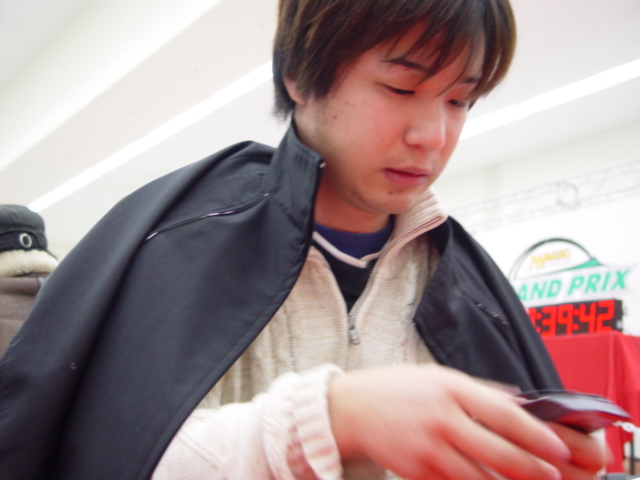 Takao HigakiHigaki turned up the pressure, casting Reckless Charge on his Firecat and sending again. Kuroda threw his Imp in front of it. His Grinder fell to the Torturer. A swamp was waiting for him at the top of his deck. He used it to drop Gravedigger and return his Grinder, chumping Higaki's next attack.

But now Higaki was out of gas. Chainflinger came down and Higaki could not destroy it. It ate the Torturer on the following turn, while Kuroda piled on the damage with a Reckless Charge of his own. Higaki made an Ember Beast and held back, but Kuroda had pushed through enough damage that his Organ Grinder could handle the rest. Higaki scooped.

He played first in the second game, kicking off with Barbarian Outcast. Kuroda started with one of his two Mesmeric Fiends, taking Faceless Butcher and seeing Reckless Charge, Patriarch's Desire and Scorching Missile. Higaki drew Frightcrawler and Charged it up. Kuroda put on a thinking face before choosing to trade with it. Flame Burst took care of the Outcast.

Now Kuroda was free to start turning the tables. He got his beatdown on with Dirty Wererat. Higaki answered with Organ Grinder. Kuroda would have none of it, playing Chainer's Edict and a second Fiend to steal back the Butcher. Higaki had no choice but to remove it with Patriarch's Desire.

Kuroda kept things hot with Dusk Imp, his six land practically pointing at the Edict in his graveyard. Higaki was worried about the possibility of a seventh land, and held back on his Butcher. Kuroda made him pay with a Zombie Trailblazer that locked down his only red source.

Desperate, Higaki Butchered away the Wererat. Kuroda dropped his seventh land and Edicted it away. He swung with his crew instead of saving his Trailblazer to keep Higaki off red mana, giving Higaki the chance to play a Minotaur Explorer. Unfortunately for him, it only delayed the inevitable, as Kuroda swung in the air to victory.