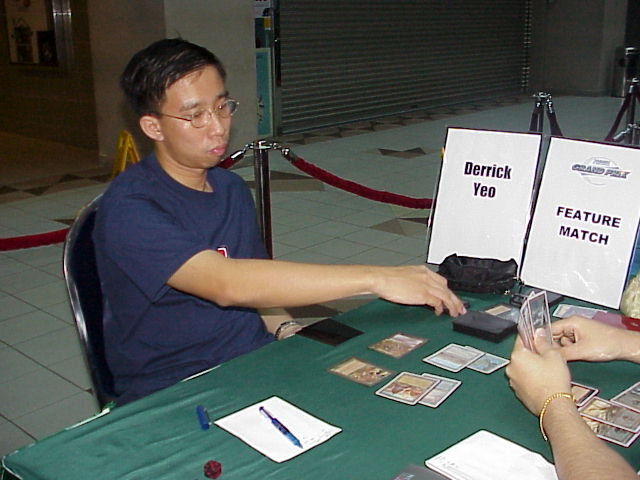 Masayuki Higashino and Derrick Yeo were both 6-0-1 as competition started up on Day 2. They both chose to intentionally draw with their round 7 opponents to start the day undefeated. Masayuki is one of Japan's finest players, who has been the Japanese National Champion as well as competing in several Pro Tours. Yeo is a great Singaporean player, who has not made any huge showings yet. Higashino was running Suicide Black, the most outright aggressive deck in the field, while Yeo brought CounterSliver, an offensive deck that relies a little more on control than threats. Both playing aggressive decks, the match promised to be quick and brutal.

Derrick chose to play first. Neither player had an incredible hand, but Yeo made the first play, casting a Hibernation Sliver. While the deck prefers to cast Crystalline Sliver first, Yeo did not have one, holding only an Acidic Sliver and a Swords to Plowshares. Higashino wanted to make sure the road was clear for his Black Knight, so he played an Unmask, pitching an Unholy Strength. Seeing the biggest threat, the Sliver, he took it and played his Knight, preventing the Hibernation Sliver from attacking, while stealing tempo for himself. Derrick could do nothing but play another land, having lost his other attacker. Higashino drew and played a Carnophage, expecting it to be Plowed, which it was. He attacked with his Knight and brought Yeo to 18. Yeo drew a Demonic Consultation and the entire tempo of the game changed. He Consulted for a Muscle Sliver, finding it about fifteen cards deep, played a City of Brass and dropped the Muscle, to attack for three with the Hibernation Sliver. Masayuki untapped and cast Unholy Strength on the Knight, effectively stopping Derrick's offense. With nothing left to do, Yeo pulled a second Muscle Sliver off the top of his deck, but he still couldn't attack with the 4/4 Hibernation, thanks to the massive Black Knight. 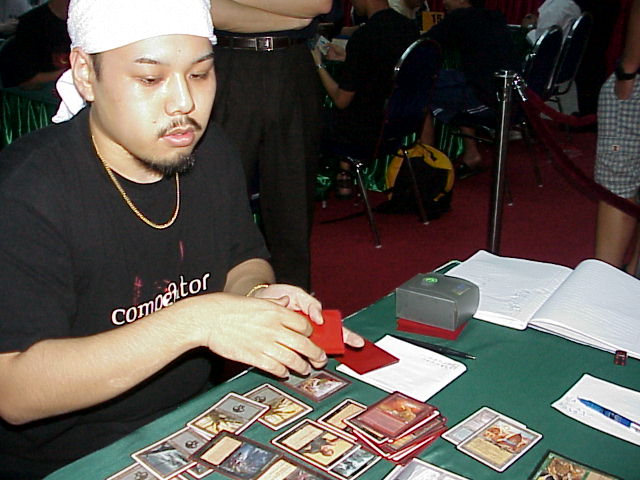 The game quickly changed on Higashino's next turn. Drawing a Necro, Masayuki suddenly had access to a large number of spells. I also noticed that all of his cards that could be, were white-bordered. Lots of superstitious US players play with white-bordered Necros in a totally black-bordered deck, on the theory that you'll draw the crummy looking white-bordered cards early and often. Higashino just liked the way the white-borders looked. His Swamps were all from Portal - Three Kingdoms, and they looked very sharp. He had not played a land other than a Swamp the entire game. He Necroed for six and passed his turn. Yeo passed his turn as well, which was kind of an odd play. Higashino used the extra time to cast two Dauthi Horrors, which threatened to wreck Yeo's shadowless deck. He Necroed for three more cards and was done. With Higashino using his life to draw cards, Yeo went on the offensive, attacking with all three creatures. Using First Strike rules, Higashino forced Yeo to return a Muscle Sliver to his hand before his creatures could deal damage, preventing him from doing seven, which would have put him in range for a kill on the next turn. Yeo replayed the Muscle Sliver, taking another point from the City. On his turn, Higashino untapped and looked at his seven cards. With another Necro, a Carnophage, a Duress and a Demonic Consultation, he realized what the correct play was. He Duressed, seeing no threat spells. So he Consulted for a Firestorm. It ate up a huge chunk of his deck, but that wasn't important at all. He ditched three cards and destroyed Yeo's entire side. Without an offense, facing down eight points of attackers, Yeo conceded.

Derrick blew his breath and said "wow. I wish I'd had a counterspell." The two players shuffled up for game two, where Derrick again would play first. Derrick's hand was great - except that it only contained a single land, a Scrubland. Holding both a Consult and a Duress, he was unsure of his course of action. He chose to hold for the Consult, so that he could play a second turn Crystalline Sliver. Higashino Duressed him, and he didn't Consult in response. This could have turned into a huge fiasco for Yeo, but Higashino chose to take Duress, rather than Consult - to protect his own hand of Pyroblasts and a second Duress. Yeo's Consult was rather harsh, forcing him to lose three Muscle Slivers and two Crystalline Slivers. He finally found an Underground Sea about twenty five cards down, to play his second turn Crystalline Sliver (which was a 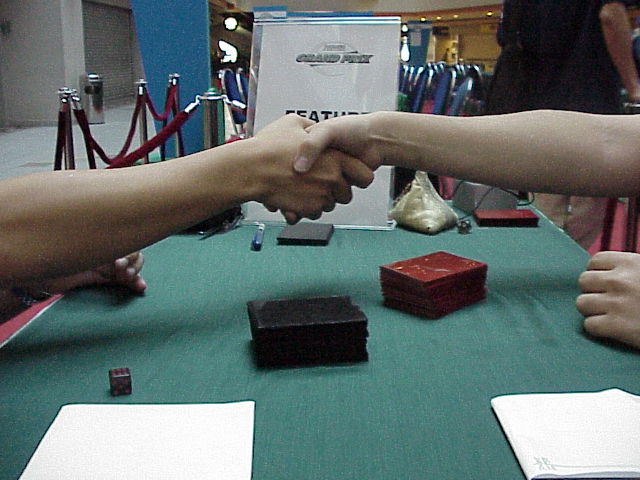 high priority, after last game's Firestorm!). He was also holding a Worship, which would have locked the game up for him. Masayuki played a second turn Black Knight, which would keep the Crystalline Sliver at bay. Yeo had to pass his turn, drawing a vital land. On his third turn, Higashino began attacking. He played second Black Knight, which again would grant him tempo. Derrick again had to pass, drawing a Counterspell. Higashino played an Unholy Strength on his Knight and attacked for six. He Duressed and backed it up with a Pyroblast when Yeo tried to counter it. Apparently, Yeo was planning to ride Crystalline Sliver/Worship to the win, but this Duress wrecked that play. The rest of the game was an attempt by Yeo to stop Higashino's attackers, which was somewhat successful in delaying the win, but it could not stop the win. After a last desperate Consult passed his last chance to win, Yeo extended his hand.