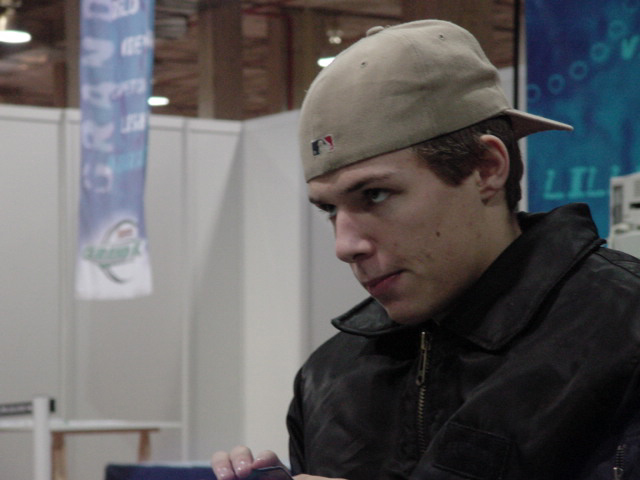 Noah and Ruel flipped a coin and they agreed that the winner could either choose which chair to sit in or to play first. Olivier won the coin flip and chose to remain in his seat giving Noah the opportunity to play first.

Noah mulliganed his first hand. Both players had a slow start and Noah's turn three Llanowar Knight was the first spell cast. Olivier played his third land, a Swamp, to go with his earlier Forest and Island. Noah attacked with the Knight bringing Olivier to 18 and cast a Glimmering Angel. Olivier used Recoil at the end of turn to return it to Noah's hand and Noah discarded a Plains. Olivier played a Forest and did nothing. Noah played his fifth land attacked Olivier down to 16 and recast Glimmering Angel. During his fifth turn Olivier played a Benalish Emissary destroying one of Noah's forests. Noah attacked again bringing Olivier to 14. Turn six saw Olivier dropping his sixth land tapping out to play Treva the Renewer. After two attacks Noah was down to seven life. When Olivier attacked the third time Noah elected to block with Glimmering Angel, cast Gerrard's Command on it and used his two Sunscape Apprentices to make the angel 7/7. Faced with loosing the dragon and possibly the match Olivier had the answer. He cast Fleetfoot Panther to save his dragon and recast it. Three turns later Noah succumbed to the dragon.

This game ended quickly as Olivier got a game loss for not registering a Mogg Jailer. 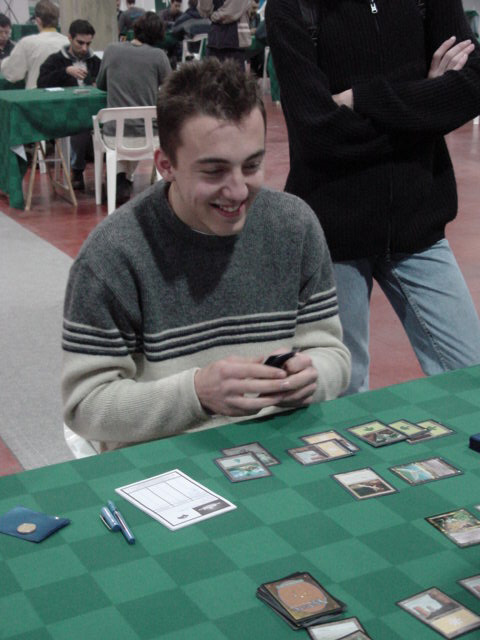 Noah played a second turn Blurred Mongoose and Olivier played a second turn Thornscape Familiar. Noah kept the pressure up by playing a third turn Pincer Spider and Olivier played a Fertile Ground and a Benalish Trapper. Noah attacked Olivier down to 14 and played his fourth land. Oliver attacked Noah to 17, played a land and Benalish Emissary kicking one of Noah's forests to the graveyard and created a ground stall. Next turn Olivier tapped the spider at the end of Noah's turn and played Fleetfoot Panther as an instant returning the Emissary. He attacked Noah down to 14, played his fourth land and with the help of fertile ground and Thornscape Familiar cast turn Treva. Being backed up by two tappers and Sabertooth Nishoba, Treva ended the match in a couple of turns.