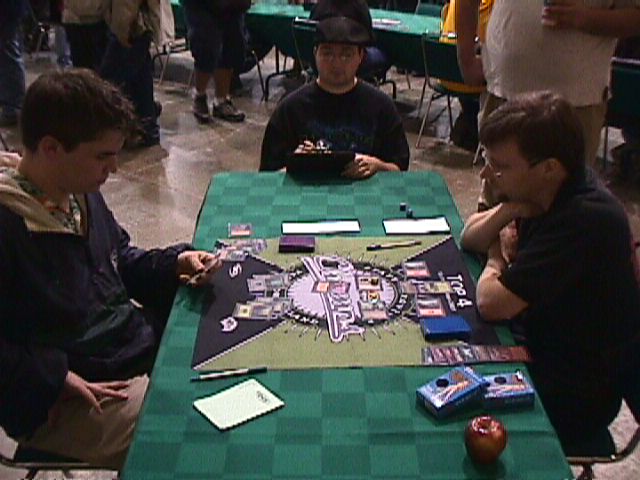 Brian Kibler vs. Rob DoughertyRob Dougherty is one of the elder members of team Your Move Games, with several top finishes to his name, including first place Pro Tour: Washington DC. Brian Kibler has not yet won a Pro Tour, but captured the hearts of players everywhere by playing Rith, the Awakener in the top 8 of Chicago last year.

Neither player seemed particularly happy with the quality of the packs at their table. "We're the two Green decks from the Green starved table", commented Kibler. "There must have been a million [Diligent] Farmhands, and I'm really annoyed I have to maindeck a Skyshooter". Rob agreed. "I think I got the only Elephant Ambush in the draft. The Legendary Elephant Ambush." Brian and Rob both sat down to play with Green/Black/Red decks, though Rob's deck splashed Black, while Brian's deck splashed Red. 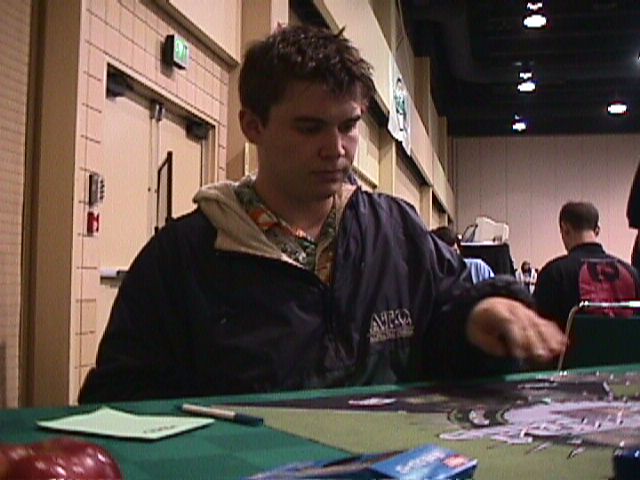 Brian KiblerBrian won the die roll, and elected to play. He led with a Bog Wreckage, which was met on Rob's turn by Diligent Farmhand #1. It was joined a turn later by Werebear #1, leaving the Werebear/Farmhand count tied at one to one. The next turn, Brian sat and thought for a while, eventually casting a Last Rites for three. He pitched Whispering Shade, Fledgling Imp, and Diligent Farmhand #2 to strip every non-land card from Rob's hand (which included Blazing Salvo, Nantuko Elder, and Demoralize), though he was left holding a Centaur Garden. Rob proceeded to peel a Barbarian Lunatic off the top of his deck, and continued to swing with his pair of 1/1's.

A turn later, Brian summoned Painbringer, and had a good many cards to power the minion thanks to his voluntary discarding earlier. 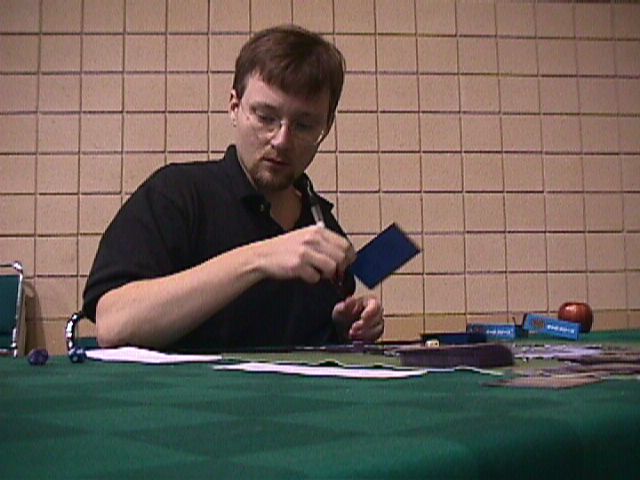 Rob DoughertyPainbringer began chewing away at creatures over the next couple of turns, killing first the bear, and then a Junk Golem of Rob's, which had gotten to attack but once. It was made clear that the Painbringer was worth half of Brian's life total, when he paid five life to protect it from Rob's Blazing Salvo. However, the Salvo brought Rob to threshold on turn 6 of the game, allowing him to summon very angry Werebears #'s two and three in short order.

Brian made a valiant effort to gain control of the game, by playing a Krosan Archer and Farmhand #3, and ending up with four cards in his graveyard, which was enough to Ghastly Demise one of the Werebears. Unfortunately, Rob drew a Thermal Blast which removed the Painbringer, and shortly thereafter played a Chainflinger, which drew a concession.

Between games, Rob sideboarded in an Engulfing Flames, and revealed that his Black splash was for a sole Morgue Theft. Brian brought a Plains and a Thaumatog into his deck. They also discussed the first Pro Tour in New York City, ribbing a bit of fun at Darwin Kastle's deck (Darwin a close friend and teammate of Rob's).

"I think his [Darwin's] deck started its mana curve at four with Erhnam Djinn, threw in a couple of Ihsan's Shades, and ended with some seven cost creatures" - Brian

Brian again chose to play, but stalled at two mana. He proceeded to discard several times, dropping creatures such as Stone-Tongue Basilisk and Leaf Dancer into his graveyard. Rob took advantage of this situation, attacking with a Nantuko Disciple and Diligent Farmhand. Brian could only muster a Ghastly Demise and a Steamclaw before more creatures joined the game on Rob's side. After discarding a couple of more times, Kibler conceded, revealing a very respectable hand including a Zombify which could have been used to bring the Basilisk into play had he ever reached four mana.