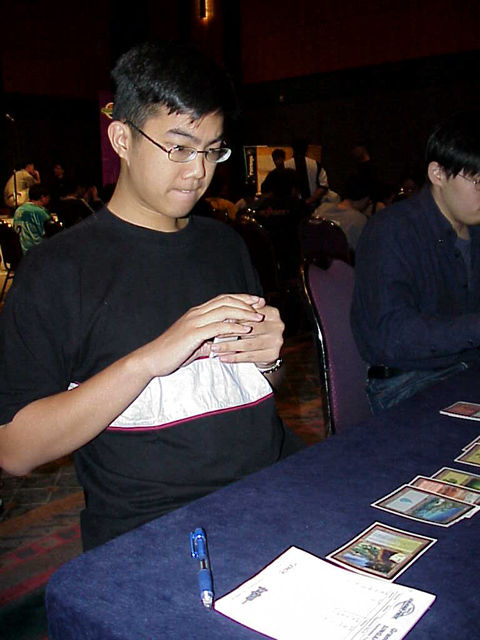 When this Feature Match was announced, a loud "Oooh!" rose up from the competitors. Kwan was on last year's Singapore National Team, and Lau was its champion. Even better, the two are playing nearly identical decks.

Kwan did his best voodoo-cut to force a mulligan from Lau. Lau would have none of that dirty pool, and his taking of the high ground reaped a karmic reward. His opening hand was jim dandy.

Lau went first, a palpable advantage in the mirror. It let him be the first on the board with Gaea's Skyfolk, and when Kwan answered with one of his own, Lau was ready with Fire to clear the way. Kwan's Mongoose was a more persistent problem, so Lau let it be and played a mainphase Fact or Fiction with Kwan mostly tapped out. He was richly rewarded.

Kwan sighed audibly as he split Prophetic Bolt and Gaea's Skyfolk from Exclude, Shivan Oasis and a second Prophetic Bolt. Lau naturally took the larger pile, and was happy to do so. They traded hits for a turn, seemingly unwilling to walk into each other's countermagic.

The silence was broken when Kwan hit a Fact or Fiction of his own, despite Lau's five open mana. Lau cagily put Shivan Reef with Kavu Titan, offering a larger pile of Exclude, island and Mystic Snake. However, Kwan was desperate for red mana, and took the smaller pile. 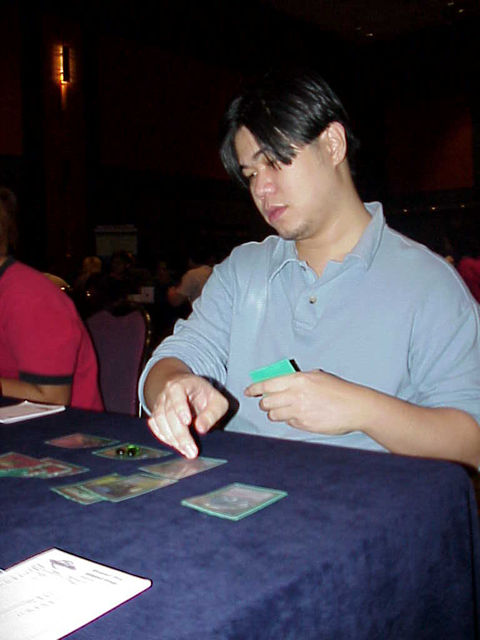 Now it was Lau's turn to brave disaster. Kwan had plenty of mana at his disposal, and Lau went for an end-of-turn Prophetic Bolt. Kwan's only response was a Bolt of his own, which was good news for Lau. He untapped and his Skyfolk knocked Kwan to seven. He kicked up a Kavu Titan and passed the turn.

Kwan's back was really against the wall. Lau had a mittful of cards and a rather nasty 5/5. Kwan kicked up a Titan of his own and crossed his fingers. Fortune was not with him. Lau turned over a Repulse, and they were on to game two.

Game two was Kwan's time to shine. Back-to-back Gaea's Skyfolk were answered by Lau's Blurred Mongoose and Repulse. Kwan replayed his bounced bear, and added an unkicked Titan into the mix. Lau was forced to hold his Mongoose back and blow a second Repulse on the Skyfolk.

Kwan had no shortage of creatures, and was all too please to run his Titan into the Mongoose. It was replaced by another, more kicked, Titan. Lau was clearly in a bad way, Icing the beast to slow it down. Kwan replayed his Skyfolk and passed the turn, Icing Lau's only blue source. 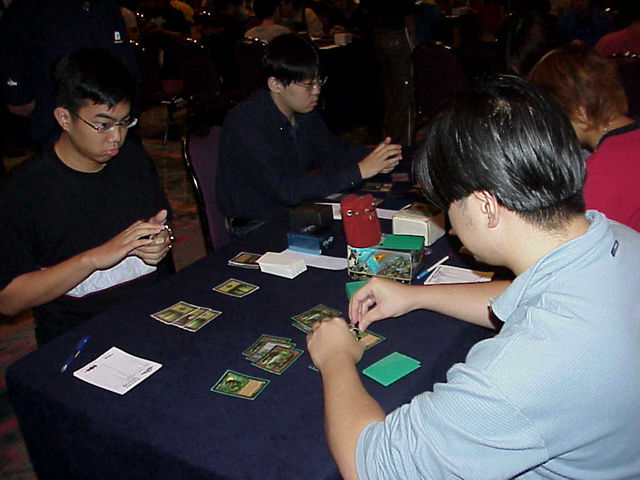 Lau had to pass it back without a play of his own. He Raged an incoming Skyfolk, but still fell to two. Kwan dug for a finisher with Jungle Barrier. But then Lau untapped and threw down Jilt with kicker to axe the Skyfolk and bounce the Titan! He even had the Exclude when Kwan tried to replay it, though he fell to one in the process.

With renewed vigor Lau dropped Gaea's Skyfolk and a kicked Titan of his own. Kwan's Flametongue ate the airbear. Lau had no answer. Kwan Repulsed the lone Titan to make way for his 4/2. Lau tried to off the attacker with Prophetic Bolt. Kwan played Gainsay. Lau was about to respond, but realized that he only had one painless source of blue, and he'd already used it. Laughing, he scooped.

Lau bemoaned his painful draw. "All I want is one forest and one island. I'm not greedy."

He got his wish in game three and was first on the board with Gaea's Skyfolk. Kwan played a Titan, and Lau matched him. Kwan tried to keep up with a Rage on Lau's Skyfolk, but Lau came back with Jungle Barrier to stop the ground assault. The cavalcade of card advantage continued with Kwan's Flametongue taking down Lau's Titan.

Lau untapped, and passed his turn without a play, safe behind his barrier. Kwan tried a kicked Kavu Titan, and was shocked when it wasn't Excluded. Lau didn't keep him in suspense long, displaying a kicked Jilt that sent the Titan home and mopped up the Flametongue.

Things looked worse for Lau when the Titan came back down and he still had no Exclude, nor an end-of-turn Fact or Fiction. He also had no play on his turn. A Repulse from Kwan forced him to take seven, but even the extra card from Jungle Barrier wasn't helping him. Kwan made a Barrier of his own.

The two Titans attacked Lau again, and his Barrier ate the smaller one, with Lau falling to five in the process. This only let Kwan's Flametongue Kavu dismantle the Barrier. Lau's situation was a Class Six Catastrophe. He had to use Ice to lock down the kicked Titan just to stay alive. Kwan reponded with Prophetic Bolt. Two Gainsays later, Lau was at one and drawing his Ice card. It wasn't something to deal with the Flametongue, and he conceded.

Turning over his hand, he revealed that his draw had included eleven lands.