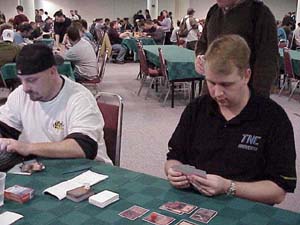 This was the first time Scott Johns and Philip Freneau have faced each other in a "real" event, although they did once meet in a small, insignificant side event.

Johns led with a turn two Nightscape Familiar, while Philip brought out a Dream Thrush. Johns applied beats and dropped the Fatty Lord: Kavu Monarch. Freneau played Crimson Acolyte, which is not so very good against the trampling that the Monarch grants. A nice little Hooded Kavu joined Johns's side, fattening up his already bulging forces, which cheerfully attacked. Metathran Transport came down on Philip's side, realizing that his goal in life was to provide defense against Johns' Army of Fatties.

Johns put the Hood on and brought both fatties, dropping Philip to 9. Philip, with a single Island and two Forests, had his Dream Thrush working overtime; but he simply drew, thought, and passed the turn to Scott, who was conveniently also stuck on three mana. Johns Hooded up again, and Philip threw the Transport in front of the Kavu Monarch, adding Gaea's Might to the mix, killing the fattie Kavu in the process.

On his turn, Philip Assaulted the Nightscape Familiar; Johns was busy not peeling a much-needed Island from the top of his deck, but he did put the Hood on, taking Philip to 5.

Philip served with the Acolyte, Thrush, and Transport, leaving only a very lowly and seemingly pathetic Quirion Explorer home to take one for the team. Johns served with the ed one, but it got Spited (insert "for [Barrin's] spite" joke here), so he played the Monarch and passed the turn.

Philip added a Llanowar Knight to his army of mid-sized fatties and passed. Johns, however, was having his own fun in playing "hide the Islands"; he had a hand of Bog Down, Faerie Squadron, Probe, Repulse, and other assorted blue goodies that were beyond his means. He elected to play Bog Down against Philip, netting two cards that I couldn't see, but sounded really uneventful when they hit the graveyardyard.

"Whatever" was all that Scott could mutter as he continued to draw non-Island cards, while Philip continued the little beats that kept on coming. Johns was feeling the urgency of needing to peel an Island but, this being Daylight Savings Time, didn't, yet again. He took a moment to get up and clear his head before discarding Exotic Curse. In his frustration, he muttered some obscenities under his breath. The exact obscenities were not entirely audible to this reporter. 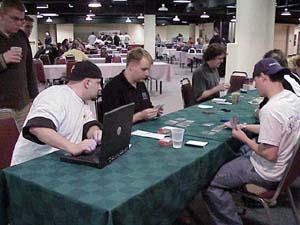 Meanwhile, Phillip beat on his land-screwed foe, getting him to 4. Johns, amazingly, drew a fifth land (Mountain), with the comment of "It always comes on the turn you're going to die!" cast Pouncing Kavu (with kicker) who, like Freneau's earlier Transport, was relegated to defense.

Scott had a hand of 6 blue cards, which was every blue card in his deck save one; he couldn't find the Island that would allow him to wreck Philip.

Scott wished Philip good luck and elected to draw first, hoping for happier mana moments. He dropped a Turn 2 Metathran Zombie, and brought the beats. Unlike last game, Johns had a Terminal Moraine for a little smoothness. He dropped a Mountain and Ancient Kavu, while Philip began to realize that it might be time to get a move on. To that end, Freneau dropped Sunscape Apprentice.

Ancient Kavu ran into the Apprentice, who had Gaea's Might thrown on him. Johns played Hunting Drake and Kavu Monarch the next turn in an attempt to become utterly savage. Philip was feeling the burn, but all he could manage was a kicked Prison Barricade. Johns's army wasn't about to be stopped by a wall, and he just ran over that bad boy.

Johns took a lengthy look through the wonderful world of his sideboard, but decides that sideboards are overrated and played as is.

Johns mulliganed for Game 3, and didn't even seem surprised. He kept his six-card hand and played a Firebrand Ranger and Volcano Imp to Philip's Llanowar Knight and Tower Drake, which were soon joined by a kicked wall. Little beats were traded to and fro (mostly fro), until Philip dropped a Sunscape Battlemage with the "destroy target Volcano Imp" kicker. 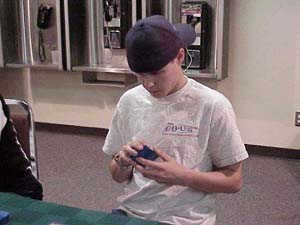 Johns seemed to be in a little trouble, but recovered in a very impressive manner by dropping Tahngarth. It hits with a thud, but it does hit. And stick. Nevertheless, Freneau brought the beats, which put Johns in "thinking cap" mode for a full minute. Tahngarth ended up blocking a Llanowar Knight, and a Tribal Flames came over to finish off the bruised legend. The board situation was this: Battlemage and kicked wall for Philip, and later a Sea Snidd, Nightscape Apprentice for Johns.

Make that Dream Thrush and Familiar for Johns, who was regretting the fact that his Pyre Zombie had shown up a grand total of one time all day. In fact, Scott said that aloud, but in the vicinity of Andrew Johnson, who responded with "you think you're the only guy who lost in the last round?" Playful banter ensued in the seconds after he scooped.