Round 8 Feature Match: Showing Some Spirit(s)

Battling for the honor of being undefeated at the end of the first day of Pro Tour Dark Ascension, Italy's champion Samuele Estratti sat down to compete against Chicagoan David Gleicher. The Italian had emerged victorious at Pro Tour Philadelphia last year in the professional debut of the Modern format. His opponent for the round had no title to bring to the table but did have years of experience grinding the Midwest PTQ circuit and a strong analytical mind for the game.

After winning the coin flip Estratti opened on Gather the Townsfolk. His opponent made the exact same play, and with both on an Island and a Plains for their lands, appeared to be playing the exact same deck. "Mirror match?" Estratti said with a laugh before casting a Stormbound Geist. 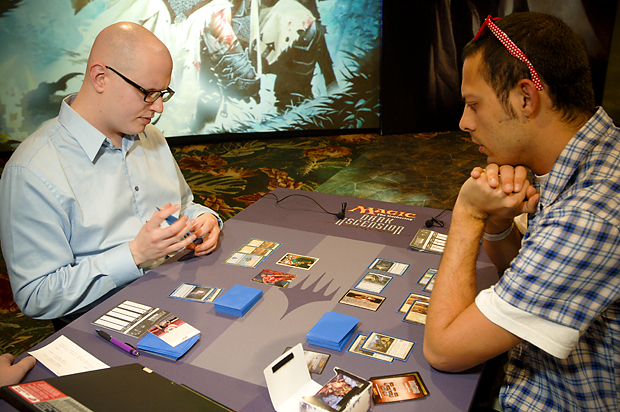 Both Samuele Estratti and David Gleicher are representing the same colors. But how are their decks different?

One spell Gleicher didn't have? Angel of Flight Alabaster.

The 4/4 merited a read from the American who shuffled his hand around in an effort to come up with a solution for the heavy hitter. The Angel began recurring a Tower Geist Estratti had lost to a combat trick from his opponent as it began giving the Italian a lead in cards.

But Gleicher had a trick up his sleeve. Taking an all-in attack from his opponent, he fired back with an all-in of his own. With no blockers Estratti was forced to take the damage and Gleicher revealed Rally the Peasants. The instant wasn't lethal on its own, but a Clifftop Retreat gave him the red he needed to flash it back. When he did, Estratti revealed a trick of his own: Lost in the Mist, countering the spell and bouncing one of his opponent's attackers. 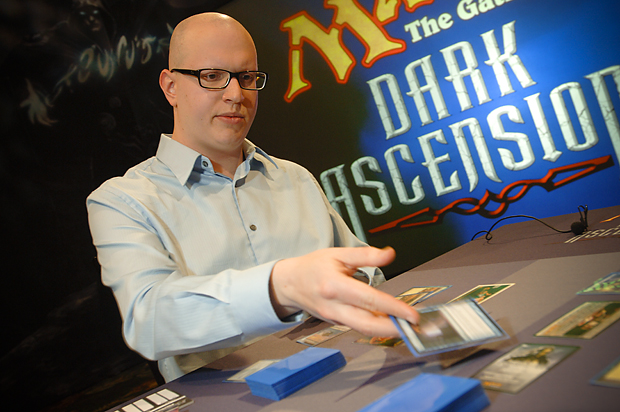 David Gleicher gets Lost in the Mist before he can successfully Rally the Peasants.

Gleicher did some math and realized he was dead to the impending return swing, sending the match to the second game with Gleicher behind.

Gather the Townsfolk kicked off the second game for Estratti as it had in the first while his opponent cast Selfless Cathar, used a Traveler's Amulet to dig up a Forest, and used three mana to plunk Armored Skaab to the battlefield. The two settled in for a long game while Estratti tried plinking away at his opponent's life total using a Stormbound Geist.

Drogskol Captain from Estratti was answered by Burden of Guilt from Gleicher, but a Demonmail Hauberk hit for the Italian and made his Stormbound Geist unmanageable. 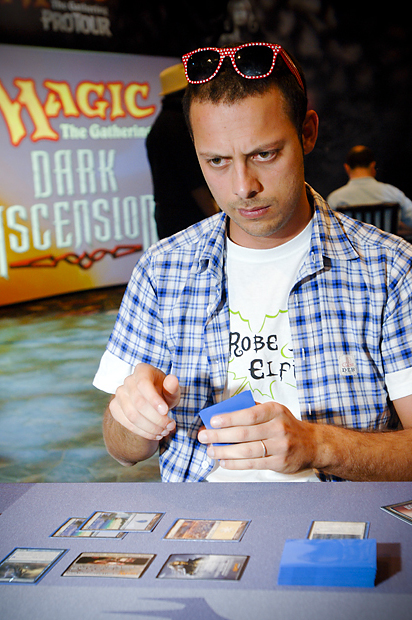 Estratti's spirits put his opponent on the back-burner.

The equipment so unnerved Gleicher, in fact, that he forgot to use his Burden to tap his opponent's Captain and took extra damage as the flier hit the red zone. He didn't miss the play the following turn, but still fell to just 1 life. When his deck yielded him a land he fell in the match to leave Estratti undefeated through Day One.

"That was not a close match," Gleicher said with a smile, reaching for the match slip.