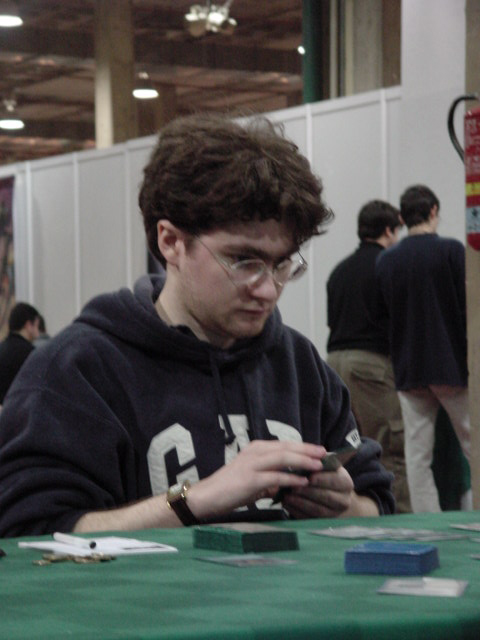 Roc elected to go first in game one, but with a hand containing one spell - he was forced to mulligan - despite that spell being Dromar the Banisher ! Unfortunately his six card hand contain a single land, which was a plains with a hand full of green cards, and he was forced to go down to five cards. Tony's draw was pretty good - he was playing a three color deck after receiving some misleading signals from Mike Pustilnik in the draft.

Roc found a playable hand with five cards, but could only play two Plains before sitting there doing nothing. Meanwhile Tony played turn three Shivan Zombie and turn four Vodalian Zombie, bringing Roc to fourteen before he eventually found a Forest and tried to cast a blocker - Amphibious Kavu.

Tony had a Prohibit in hand for this, and then played an Urborg Drake and attacked twice more, bringing Roc to four. Despite having been stuck with no land for the first couple of turns, Roc still did not manage to play a blocker now he had found some land. Without any way of dealing with these three attackers, Roc was forced to move onto game two.

Herms was happier with his opening draw in the second game, providing himself with plenty of lands by laying a second turn Quirion Explorer. This enabled him to bring out an Aurora Griffin on his third turn, and a Glimmering Angel on his fourth turn, bringing Tony to 14 while Dobson waited to play five lands and drop the Faerie Squadron in his hand.

Tony did manage to Prohibit a Rampant Elephant to stem the bleeding, and then cast the Faerie Squadron. Tony thought for a while and decided not to block when the Spaniard attacked anyway - in case Roc had something like Gerrard's Command in his hand.

Next turn Dobson played out a Cavern Harpy to go with his Faerie Squadron, and when Roc attacked he blocked with both of his flyers. Roc did indeed have Gerrard's Command and saved his other creature with a Pollen Remedy. 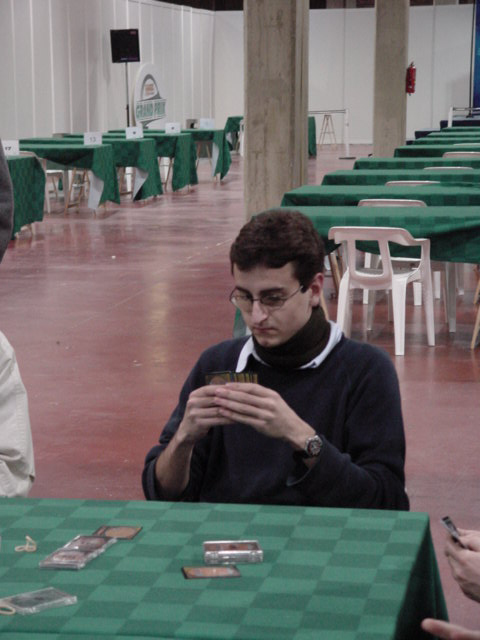 Tony managed to get rid of one of the attackers on his next turn by casting a Nightscape Battlemage, returning the Griffin and the Explorer since Roc made the Glimmering Angel untargetable in response.

Herms replayed the Griffin on his next turn, and in response to Tony casting the Cavern Harpy made the Battlemage into a White creature, so that Dobson was forced to return the Harpy itself to his hand. The next flying attack by Herms brought Tony to four, so things were looking fairly bad for the Englishman.

Tony played his Cavern Harpy, but since Roc didn't want him to return the Battlemage he made it White in response with the Aurora Griffin. Tony then had to return a Morgue Toad to his hand instead. This was probably just an oversight on Tony's part, who neglected the Griffin's ability - probably because it so rarely useful.

Now he was forced to use Malicious Advice, going down to two life, to stop himself dying to the fliers, but he drew not further answer on the next turn and they moved on to game three.

Tony decided to go first in the third game, with a pretty good opening hand of Tower Drake, Urborg Drake, Viashino Grappler, and the land to cast all of them.

Roc's hand was fine as well, and he played the first creature - a Quirion Elves on his second turn. He didn't need his mana straight away, so he attacked with it to see if he could get Tony to block with his Tower Drake.

Of course, Tony didn't and he attacked back with the Drake, and played an Urborg Drake. Interestingly, Tony did not use his Urborg Drake as a blocker for the Quirion Elves which Herms attacked with on his fifth turn. The Spaniard continued to summon 1/1s - this time a Quirion Explorer.

But Tony wasn't so happy to see Roc attempting to bring in another Amphibious Kavu, and Excluded it. Tony was by this point on 11, with Roc on 14.

Tony cast a Kavu Aggressor, and a Viashino Grappler, seeming to be building up a great offence, he also held a Rushing River in hand, which seemed to be serious trouble for Roc. The Viashino Grappler did not block anything because of Dobson's confidence in the Rushing River's ability to keep him safe, and Tony went down to six.

Roc was out of good threats now, playing only another 1/1 Quirion Explorer. Roc held a Pollen Remedy which would be sufficient to keep him alive even if Tony launched an all-out attack. 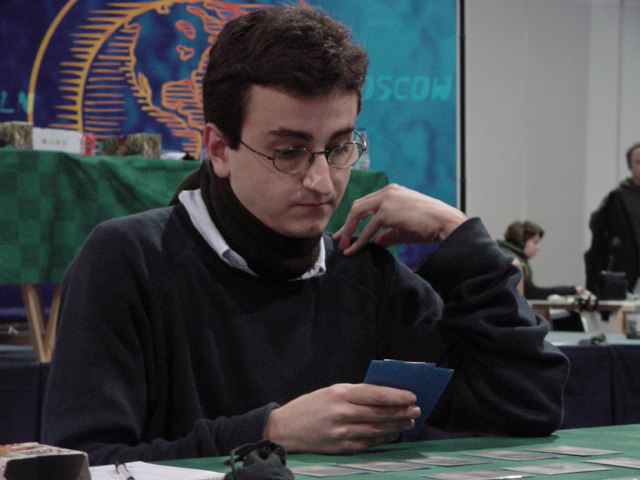 Despite being in a seemingly strong board and hand position, Tony looked worried. He was on six and Roc had six power of creatures in play - which meant that if Roc launched an all-out attack, Tony couldn't wait to see if anything was the target of some form of creature-enhancement before casting the River.

Roc did not block, and used the Pollen Remedy to only take four damage. This put him on six life. Tony used the Rushing River on his turn to stay alive, but at least Roc had the mana to replay them immediately. Tony could not now get through enough damage to Roc, but one possibility was an all-out attack, which would take Roc to two and remove both of his blockers. This is what Tony did, and then he played the Morgue Toad in his hand to block. Roc needed to draw any sort of creature enhancement to win, or his attack would only bring Tony down to one, and then he would die to the flyers next turn. He knocked loudly on the top of the deck, drew a card, took a peek at it - - Forest - - and then conceded the game.