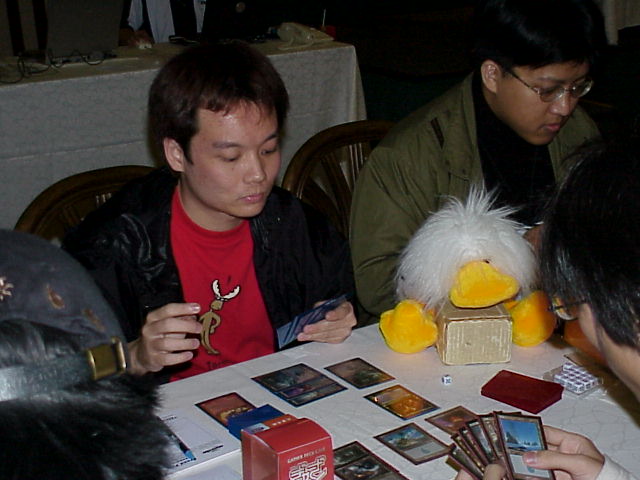 Without a two-drop, Wong was in trouble early. Tsukamoto hit with Thunderscape Apprentice and Familiar. He gated in a Lava Zombie. Wong's side of the table was empty.

Wong bought time with a Recoil. The Zombie was held back long enough for him to Probe with kicker before taking a hit. Tsukamoto discarded Simoon and Apprentice, drawing Thornscape Battlemage off the top. His hand was rich in goodies. He had a Flametongue Kavu to dispatch a kicked Arctic Merfolk, knocking Wong to seven. Wong's Cavern Harpy was pushed aside by the Battlemage. He fell to one on Tsukamoto's attack. When Tsukamoto's Horned Kavu brought the mage back for another round, Wong conceded.

Tsukamoto's draw was much slower in the second game. As hard as it is to believe, so was Wong's. He Washed Out Tsukamoto's two creatures on turn four. Without any creatures, they'd be the end of him.

Tsukamoto replayed his army. All Wong could find to put in the way was an Arctic Merfolk. He let an attack through, saving his blocker for a more dire situation. He drew a Swamp. This fifth land let Tek hit the table as a 4/4 flier. Tsukamoto kicked his Canopy Surge and swung again. He even had the Tribal Flames to remove Wong's next play of Dromar's Attendant. Finally, Wong chumped. He Probed for an answer, but none came.