Share Article
Share Tweet Share
the players reassemble for the second round of Coldsnap draft play, Ian Pirouet is the last undefeated player, sitting on six wins and a Round 1 unintentional draw. Jon Hopkins is on six wins, looking to break that streak. 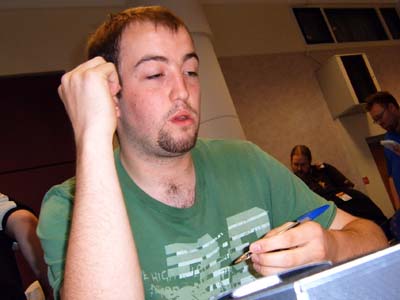 Jon Hopkins adds it up.

Ian won the die roll, and chose to play. He laid an Island, Jon replying with a Swamp and Rimebound Dead. Another Island saw an attack for 1 from the Dead, Jon curving up nicely with a Stromgald Crusader. Unfortunately, it turned out that Ians's lack of creatures was entirely deliberate, as he dropped Martyr of Ashes, sacrificing it and revealing a Thermopod to take out the Dead and Crusader while he still could.

The mono-black curve continued, with the 3/3 Phobian Phantasm hitting the empty board. Ian's reply of Frost Raptor was looking outclassed, and indeed stood aside as the Illusion took him to 16, before being accompanied by a Chilling Shade, a single tapped Snow Covered Swamp Jon's only Snow Land. Ian attacked for two with the Raptor, then cast the Thermopod he'd revealed to the Martyr. Jon paid upkeep on the Phantasm, came in for three, then dropped a Scrying Sheets, and passed the turn with the Chilling Shade hanging back to block. Block it did, as the Thermopod came across. Two pumps and a Perilous Research from Ian later, the board was back to Frost Raptor and Phobian Phantasm, although Ian had picked up two fresh cards, a Phyrexian Ironfoot replacing the dead Thermopod.

Jon paid upkeep on his Phantasm for the third time, attacking with it to take Ian to a round 10 life. Mouth of Ronom came down to provide another snow source, then a Krovikan Rot took out Frost Raptor. Ian swung back with the Ironfoot before casting an Adarkar Windform, struggling to keep a clock down that compete with the effectively unblockable Phantasm. A fourth upkeep from the increasingly high-maintenance black creature was rewarded with another attack, taking Ian to 7, a freshly drawn Soul Spike in Jon's hand threatening to remove any hope of racing. Jon passed, and Ian untapped the Ironfoot at the end of his turn before attacking back for 6. The life totals now stood at 7 for Ian and 9 for Jon. Survivor of the Unseen came down after combat, and in upkeep Jon was finally forced to ditch the Phantasm. However, those turns of having his mana tied up by cumulative upkeep meant he wasn't short of options, choosing a Zombie Musher from the three black cards in his hand other than Soul Spike to try to push the last damage through. Ian paid upkeep on his Survivor, then attacked with the Windform. Jon's attack with the Musher took Ian down to 5, following up with a Gutless Ghoul, which was traded in for 2 life at the end of turn in response to a Skred. An activation from the Survivor was enough to draw out a Soul Spike to the face in response, removing Disciple of Tevesh Szat and Gristle Grinner to push the life totals to 1 for Ian and 12 for John. Moving into his turn, Ian paid upkeep for the Survivor of the Unseen before taking Ian to 6 with an attack from the Ironfoot and Windform and passing. John untapped and swung in with the Musher, Ian tapping his only Snow Land for mana to untap the Phyrexian Ironfoot before casting Thermal Flux on the same land, a potential block of the Ironfoot on the Musher foiled by Mouth of Ronom. The Survivor threw himself in the Musher's path, activating before hitting the graveyard. Another attack from the Windform to take Jon to 3 was followed up by Greater Stone Spirit, and when a second Thermal Flux foiled the Musher once more, John scooped in the face of lethal damage.

Ian looked happy moving into game 2, the multiple copies of Thermal Flux in his deck proving highly effective against the black decks of the format.

Choosing to play, Jon also chose to keep his opening hand of two Swamps, Tresserhorn Sinks, Krovikan Scoundrel, Krovikan Rot, Gutless Ghoul and Phobian Phantasm. Ian took a trip to Paris, but was happy with his 6.

The first turn saw a Tresserhorn Sinks for Jon and Island for Ian, a Swamp and Krovikan Scoundrel the first threat of the game from Jon. Ian's Mountain was followed by no play, threatening a repeat of the first game. This time, however, Jon's turn three play wouldn't be falling for any Martyr tricks, as the Phobian Phantasm followed the Scoundrel's attack for two. Ian hit his first creature of the game with Frost Raptor, which met with a fourth land and a Krovikan Rot from Jon, followed by an attack for 5. Ian made his fourth land drop, dropping a Krovikan Frostwaker with no Snow Land, which promptly traded with the Krovikan Scoundrel, removing the Krovikan Rot in Jon's graveyard from the game, while the Phantasm continued to take seemingly endless three-point chunks from Ian's life. A post-combat Stromgald Crusader with a Swamp untapped was insurance against a potential Martyr of Ashes, but not a Skred for 1 after Jon drew, a Rimewind Taskmage coming down, although not threatening to activate any time soon.

Jon paid upkeep on the Phantasm again, dropping land number 6, attacking to take Ian to 7 and dropping a Gutless Ghoul. Ian had an Ohran Yeti to keep the Ghoul at Bay, but a last attack from the Phantasm, followed by a Musher and second Crusader when the upkeep finally ran out was enough to have Ian moving to Game 3.

Ian chose to play, and both players kept their opening 7, with Jon keeping a hand of 2 Swamps, Scrying Sheets, a Snow Covered Mountain, Chill to the Bone, Zombie Musher and Mountain. 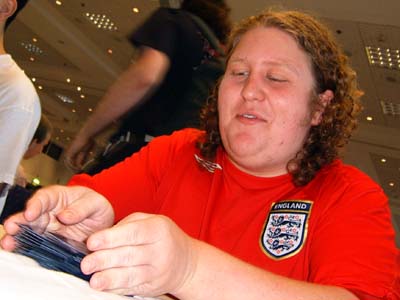 Both players laid land for the first two turns, a pair of Islands and a Thermal Flux cycled for the card draw for Ian, Swamp and Scrying Sheets for Jon. A third Island from Ian brought a Phyrexian Ironfoot with no snow mana, while Jon had the Snow Mountain and no play. The Ironfoot held back, and was joined by a Frost Raptor, although not a fourth land. Scrying Sheets was activated at the end of Jon's turn, but the Swamp on top of his library had to wait for his draw step. The Swamp hit the board, powering out the currently blockable Zombie Musher. Ian still hadn't found a fourth land, and passed the turn back, a fifth land and second Zombie Musher filling up the other side of the board.

Ian at this point was obviously not liking his chances, a shake of the head and attack for two with the Raptor being his only play. The nail in the coffin was Jon's second Scrying Sheets, followed by Void Maw. At this point, Ian's lack of mana became a serious problem. No play from Ian led into a double block of Frost Raptor and Phyrexian Ironfist on Void Maw, with Jon playing Krovikan Rot to take down the Snow Bird before damage went on the stack, Perilous Research netting Ian some cards out of the beating his creatures were taking. Both blockers died, only to disappear into the Maw.

At this point, a Mountain and Martyr from Ian were nowhere near enough - the next attack phase saw the Martyr sacrificed to kill a Krovikan Scoundrel and force the Mushers to regenerate, but the Maw removed some of the removed-from-game creatures to pummel Ian for 10. One last fruitless draw prompted a concession, and Ian's first defeat of the weekend.