Round 8 Feature Match - Your Move Games vs. Team Antarctica 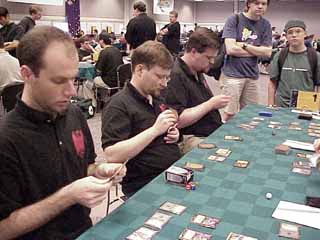 These two teams are developing quite a rivalry! They are clearly the two best North American teams and only Black Ops has any claim as their rival. This is actually the sixth time these two teams have met. Your Move Games won two matches at the Team PT in DC last fall (one sealed match on Day 1 and then the semi-final matchup on Day 3). Since then, however, it has been all Antarctica. Antarctica won their semifinal matchup in the Draft Challenge 2000 (before losing to Black Ops in an extremely close final where Dan dropped game 3 of match 3 thanks to a Florent Jeudon top-deck). After the teams IDed their way into the top 4 in St. Louis, Antarctica won their semi-final match there as well (and then destroyed Dogma in the finals).

With just two rounds to go in Grand Prix Pittsburgh, neither team had lost a match. YMG led the event at 7-0 while Antarctica was 2nd at 6-0-1. Your Move could clinch Top 4 with a draw, but Antarctica had to play. 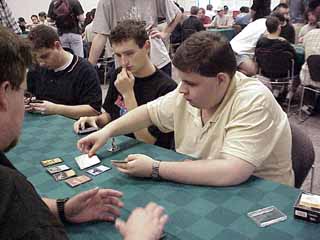 Finkel and Steve O both took blue cards out of the first pack - Waterfront Bouncer and Drake Hatchling - shying away from all three of the green and red cards. That allowed Dan O to pick up a Giant Caterpillar 6th. Steve O then picked Charmed Griffin first out of pack #2 and passed Rishadan Airship over to YMG. Kastle took a Magistrate's Veto 2nd that might have been better in Dave Humpherys' deck (since Humpherys had to play against Steve O and Steve had a blue card and a white card). However, YMG seemed to prefer to stick to their color predispositions. Kastle almost always drafts red and Humpherys is usually blue/white. Humpherys did indeed draft the Airship out of that pack (following up on his pack 1 Crossbow Infantry and Shoving Match).

The first playable black cards showed up in pack #3 and Finkel took them both: Deepwood Ghoul and Cackling Witch. This was particularly interesting since Finkel doesn't usually play black. However, in St. Louis YMG had a lot of success putting green fat in the middle and Dougherty smacked Finkel's blue/white around with his Blastoderms and other green fatties in their semi-final match. Once YMG committed to giving green to Dougherty, Finkel wisely shifted into black. 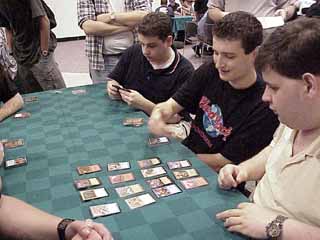 Pack 4 was quite interesting - YMG took Lunge and Overtaker while passing Ballista Squad to Steve O. Humpherys then opened a terrible pack for him: Kyren Negotiations and Vendetta. After much (non-verbal) conferring Humpherys eventually took the Vendetta. (Dan O got the Negotiations.) Kastle had been leaning towards red/black (his favorite color pair), but after Hump got a Wall of Distortion out of the next pack then were clearly considering a switch. In the 1-minute review period after Masques, Kastle and Humpherys compared their cards and agreed that Humpherys would be black and Kastle would be white.

Over the next few packs this move really paid off. Kastle managed to accumulate 4 copies of Defender en-Vec and a Blinding Angel. All 5 of those cards are amazing versus red-green and red-green is exactly what Dan O was playing against Kastle. Also during Nemesis, Steve O picked up two Seals of Doom as defensive drafts and eventually decided they were worth splashing. 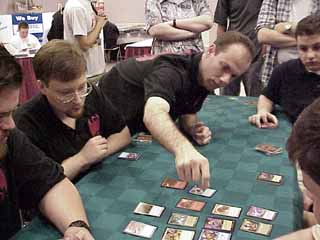 Once they figure out who was drafting which color pair, Your Move stuck to their guns. This was a departure from the strategy they used in St. Louis against Antarctica. In St. Louis YMG toyed with the Black Ops plan of maximizing removal and drafting three-color decks. This really hurt Kastle in his match against Dan O as he lost due to color-screw. This time around all three of YMG's decks were 2-color.

Finkel busted a Plague Winds in his team's first Prophecy pack and Steve O wanted him to take it. Finkel indicated, "No - it sucks" and drafted Stormwatch Eagle instead. Steve then took the Troubled Healer - one of three he would acquire over the course of the draft.

The matchups wound up as follows:

Dan O had a solid red/green deck, but Kastle had an amazing red/white deck with many cards that are amazing against red/green. Finkel had a spectacular blue/black beatdown deck while Dougherty's red/green turned out decidedly mediocre. He had nice fatties, but his deck wasn't very aggressive and he came up short a few cards (forcing him to play multiple Spore Frogs, for example). 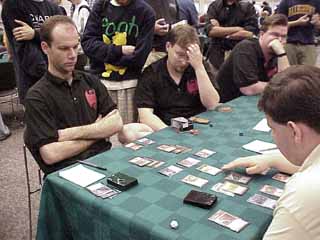 Going into the match I expected everything to come down to the match between Steve O and Humpherys. Humpherys had a weird blue/black deck with 7 different 2-mana 1/1's. He wasn't really aggressive enough to play beatdown or controllers enough o play control. Basically, he needs to get to 9-mana and cast Plague Winds. Steve had the higher card quality, but it's always a risk when you run 3 colors.

Humpherys chose "draw" after winning the die roll against Steve O. Steve got off to a really slow start because he couldn't draw any Islands. Humpherys worked him with Wall of Distortion while he was color-screwed and Steve was forced to go beatdown since he knew the Wall prevented him from playing for the long game. He did draw an island and that allowed him to cast Jolting Merfolk. The Merfolk almost allowed him to win, but he could only knock Humpherys down to 4 before the Jolter faded away. Humpherys then won with his own fliers. 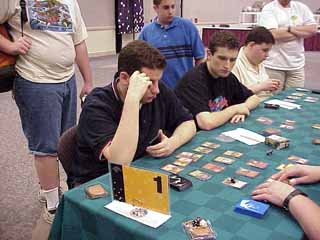 Meanwhile Dan O had an aggressive start against Kastle and Kastle didn't draw any of his 4 Defenders en-Vec. Kastle did draw Blinding Angel, but when he tapped out to cast it Dan swarmed him and then enhanced his creatures with Wild Might and Flowstone Strike to deal exactly the 13 damage he needed to kill Kastle before the Angel could shut him down.

Finkel seemed very happy that Dan took game 1 and Finkel had no trouble winning his own match 2-0. Turn 4 Death Pit Offering was a beating in game 1 and aggression plus removal was enough in game 2.

Steve O evened his match at 1-1 while his brother maneuvered to try to win his in 2 straight. Dan O had Rupture in hand, Seal of Strength on the table and was whittling away with a Kyren Glider. However, Kastle targeted all three of Dan's blockers with Panic Attack and attacked for exactly the 13 he needed to win. Dan calmly tapped three mana and cast Thunderclap on an enormous Ridgeline Rager, but Kastle was ready with Cho-Manno's Blessing. On to game 3.

Game 3 between Kastle and Dan was bloody was intricate. Dan paid 8 for an Avatar of Might and that stopped most of Kastle's offense. With Kastle building up a lethal swarm of creatures and Dan at a precariously low 6 life points, Dan drew Kyren Negotiations. He played it and started dealing damage to Kastle. Eventually, Dan decided to cast Rupture. That used up Kastle's Defender en-Vecs and turned the game into a draw. 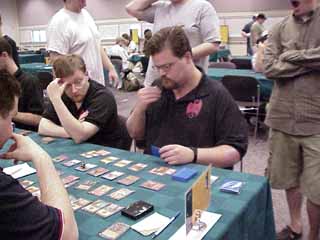 Steve and Humpherys finished game 2 with only 7 minutes left in the round. Humpherys came out very aggressively in game, but all Steve had to do was hold on until time 9and extra turns ran out). Steve went down to 1 life on extra turn #2, but he stabilized the board with a Ballista Squad and the game was a draw. Since Finkel won his match and both his teammates drew theirs, Antarctica won the overall match 1-0-2!