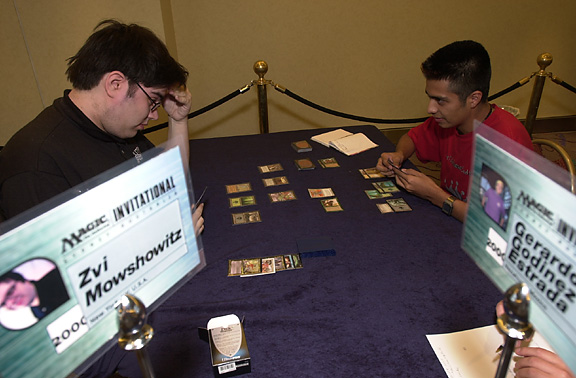 Round 8 of the Invitational saw New York's Zvi Mowshowitz face off against Mexico's Gerardo Godinez Estrada. Zvi solomon drafted a nice five-color deck utilizing the specific advantages each color had to offer, among them, the hard to cast Silver Queen. Zvi also intensely drafted any mana-producing card he saw to power his engine, fertile ground and sol grail where just a few. Gerardo on the other hand drafted primarily a red/ green deck with splashes of white and black. The only downside to the deck was too many two colored casting cards.

Game one started off slowly. Zvi was having mana problems at 3 land while Gerardo played a Jolreal, Empress of Beasts. Potentially a game wining threat Zvi wasted no time Dark Banishing the Jolreal. Casting Sol Grail, Zvi soon unleashed his creature force, consisting of Captain Sissay which helped bring into play other legends such as Asmira, Holy Avenger. Gerardo responded by playing Multani, Maro Sorcerer. Asking how many cards in Gerardo's hand Zvi assumed the Maro Sorcerer to be 6/6 but latter realized that it included his hand as well. Having 7 cards in his hand Zvi was awe struck to discover a 13/13 untargetable beast staring him down. Taking a solid hit from the Multani Zvi took a gamble for the win. On 8 life Zvi couldn't afford another hit from the Multani. In play was Sword of the chosen and Zvi's Asmira, Holy Avenger, which was 5/6. Gerardo had his Multani and Radiant Archangel. Gerardo was on 6 life, taking a gamble Zvi attacked with his Asmira hoping that Gerardo would not block. Taking the damage from the Asmira which was further boosted from Sword of the Chosen, Gerardo was reduced to one life. Zvi then played Harrow for an island and mountain and played Breath of Darigaaz for the last point of damage. After the game Zvi admitted that if Gerardo had of blocked the Asmira then he would of conceded, if only he knew.

Game two was nearly a non-event. Zvi was again stuck on 3 lands again and soon fell to a Multani, Maro Sorcerer. A first-turn Stormscape Apprentice from Zvi was all he wrote.

Game three was the pinnacle of the match. Gerardo came out strong with a first-turn Granger Guildmage. Zvi played his own first-turn creature: Stormscape Apprentice. Gerardo played a mountain and zapped the Apprentice, casting Fervor on his third turn. Zvi did little for the next several turns building his mana base and playing fertile ground. Gerardo looked to have the game in his hands, playing Sunastian Falconer. Zvi played arrested on the Falconer and latter played Silver Queen. A pause ensured and a moment of silence was felt by both parties. Gerardo knew he would soon see a horde of weenie creatures and prepared himself by casting Multani, Maro Sorceror, Shambling Strider and Verdeloth the Ancient. In the succeeding turns Zvi produced 4-6 silvers a turn. Having 15 silvers and a Silver Queen. During the entire game Gerardo had Mageeta the Lion and was patiently waiting for his second plains to cast Mageeta. But alas the plains came too late and Gerardo folded the same turn he played the Mageeta to 15 Silvers and a Silver Queen.