Round 8: Fifteen Minutes of Fame

Brad Nelson's claim to fame? He's Brad Nelson, the Magic Online FFfreak who tore up the Pro Tour scene in 2010 to clinch last year's Player of the Year race in a gripping finale at Pro Tour Paris. That's plenty.

William Postlethwaite's claim to fame? Among his myriad other achievements, "Billy P" was the only person that coverage overlord Richard Hagon defeated during the last Pro Tour Philadelphia in 2005. (Full disclosure: Rich paid me to include that.) 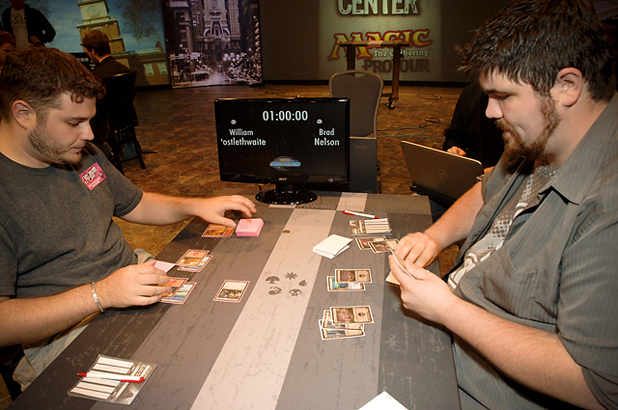 William Postlethwaite and Brad Nelson will both make Day Two, but it's all in how you get there.

After scraping through the Modern rounds with a 3-2 positive record, both players had ripped up their draft and now stood on 5-2. Only one of these two veterans could clear the pod on 3-0, however. Whoever did so would have made up for some of the disappointment in the Modern rounds, while the loser would be cast back down into the mix with only an outside chance of playing on Sunday.

The first game went by in a blur. Postlethwaite won the dice roll and opened with a flurry of plays. He followed up a first-turn Phantasmal Bear with a Blood Ogre. Nelson kept it off bloodthirst with a timely block, but the Ogre was still a credible threat. Postlethwaite even had Negate for a Sorin's Thirst on the Ogre, and Brad Nelson picked up his cards, having barely made a dent in his opponent's offense. It had taken no more than four minutes, and the 2010 Player of the Year was already a game down!

Nelson's began to fight back in the second game with a Bloodrage Vampire, although the Vampire got no further than being blocked by Postlethwaite's Goblin Tunneler. Postlethwaite threw down a Rusted Sentinel for a little muscle, but Nelson immediately trumped that by summoning the evergreen Sengir Vampire to his side. The Sengir Vampire would have won many similar games, but Billy P simply shrugged and charred the dapper Vampire with Chandra's Outrage. 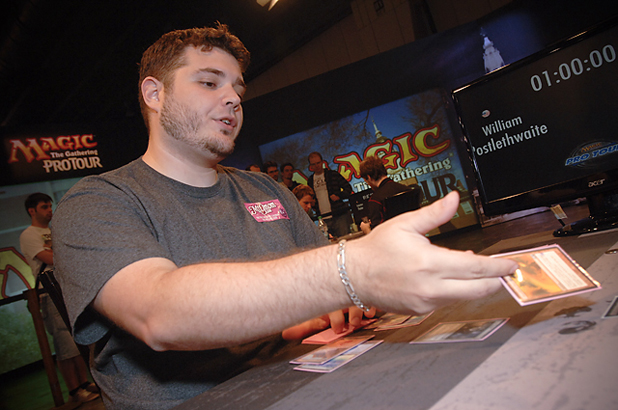 His toughness is 4. Outrageous!

The Sengir Vampire was toast, but Nelson stepped his plays up yet another gear with the black planeswalker Sorin Markov. Unfortunately for Nelson, it seemed like Postlethwaite had the immediate answer for everything Nelson was daring to try. Sending his Rusted Sentinel across the table, Postlethwaite knocked the stylish vampire down on loyalty, and then a Fling hurled the Sentinel for a second hit to finish the job.

With both his Sengir Vampire and planeswalker having been summarily dismissed, Brad Nelson surely had to fear for the worst. Making the best of it, the Player of the Year dropped a Merfolk Looter and began digging for cards, adding a hefty Amphin Cutthroat to his team on his next turn. Across the table Postlethwaite played his own ground forces, in the shape of a Phantasmal Bear and Crimson Mage, before taking his assault to the air:

"Chasm Drake, give it haste with my Crimson Mage, then attack you with them both."

Nelson laughed as he took the damage from both the Chasm Drake and its impromptu rider, shaking his head as he did so. While his Merfolk Looter had turned up nothing useful, Postlethwaite had continued to draw well.

[r8_nelson.jpg, cap="If this is how Brad always looks, we'd hate to see him do puppy-dog eyes."]

Things had gone quickly from "bad" to "terrible" for Nelson, and were well on their way to "Game Over". Playing a Cemetery Reaper offered a brief moment of hope, but the Player of the Year had no answer to the damage that was soaring over the heads of his hapless creatures, and his life total dropped relentlessly into the red.

It was all over!

Four minutes for the first game, three minutes shuffling, and seven minutes for the second game—the whole thing had taken less than a quarter of an hour. Brad Nelson shook the hand of William Postlethwaite and the Florida native stepped up to 6-2, well placed for Saturday competition.