Round 8: Fire in the Sky 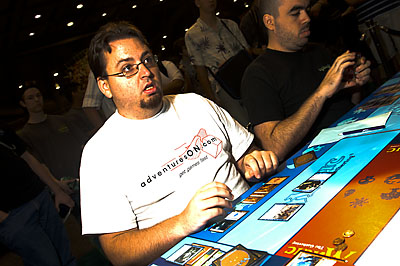 Luis Scott-Vargas is hoping to make another trip to Worlds with the U.S. National Team.

uis Scott-Vargas has received a bit of coverage this weekend, making a nice run at this year's Nationals and trying to make a second National Team appearance. Standing in his way is Grand Prix-Columbus champion Steve Sadin. Steve has managed to battle his way to a 6-1 record without the virtue of his first choice for the Standard portion of the event, and it appears that he hasn't lost a handle on his Draft decks either. Scott-Vargas is also 6-1, and both players are looking fine to make a dash for Top 8.

Scott-Vargas won the coin toss and decided to play first. Sadin was unsatisfied with his first seven cards. He sighed heavily when he saw his next six: "Five." While he was shuffling, the players got talking about Scott-Vargas's teammate David Ochoa. "The first time I met Ochoa, he ate an entire lemon segment, rind and all," Steve laughed.

"He does stuff like that all the time. Like he'll order something and literally clean his plate. It's pretty impressive," Luis admitted.

Scott-Vargas and Sadin both started the game off with a Dreamscape Artist, but Sadin wanted to rule the board early and used Grapeshot on Scott-Vargas's 1/1. Though Steve was the one who mulliganed, it was Luis who was unable to make his third land drop. A couple of turns later, he did manage to get one into play and dropped a Bonded Fetch to match the one Steve had played a turn earlier. Luis managed to get a fourth land of the top of his deck next turn and dropped a Needlepeak Spider, which was now the largest man on the table. Steve had an Arc Blade, though, and suspended it so he could feed his Rift Elemental.

Luis decided that since the Arc Blade was going to kill his Spider eventually anyway, he would try and take something with him, and Steve decided that trading his Rift Elemental and an Arc Blade token was a fair trade for the big Spider. Luis was, after all, playing red and would be able to kill his little Arc Blade enabler rather easily. That last exchange did allow his Arc Blade to unsuspend on his upkeep, though, and he chose to fling it at Luis' lone creature, the Bonded Fetch. Luis was prepared for that with a pretty cool little trick. He calmly plopped a Crookclaw Transmuter into play and chose to kill his own Bonded Fetch with the ability. This countered the Arc Blade and got rid of the recurring Shock for good. Nifty.

Unfortunately for Luis, that put two spells in the storm count, which Steve used to power out an Empty the Warrens for six goblins. Now, despite starting down two cards, Steve was firmly in the driver's seat. He also suspended Reality Strobe, which would be huge when it unsuspended since Luis currently had no board. Luis tried to slow the bleeding with a Dodecapod and a morph, but Steve had more gas in the form of a Fury Charm to kill the Dodecapod and an Empty the Warrens for four. This left Luis with only one man and a Reality Strobe coming down next turn. He was sitting at a precarious 4 life and facing a horde of Goblins. It didn't take much for him to move on.

"So you were the one with the storm deck," Scott-Vargas sighed as he shuffled his deck up for the next game. Steve just smiled back. 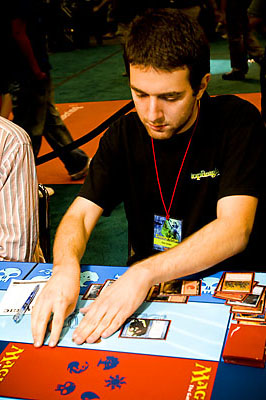 Steve Sadin proves that he's no slouch when it comes to 40-card decks.

Steve made the first aggressive moves of the game, suspending an Infiltrator il-Kor and an Arc Blade on consecutive turns, which was a great start for a deck that has the storm-enabled finishing power his has. Luis had a 3-power creature of his own, though, in Dodecapod, to try and keep up in the race. Just as in the first game, the Dodecapod met with an early demise at the hands of a Shatter, I mean Fury Charm. Luis decided to Piracy Charm Steve's Infiltrator in retaliation, and that left the board clear. He then added a Dreamscape Artist to the board knowing full well it would die to the Arc Blade, but he figured it was worth the activation it would get off before it died.

When Steve's Arc Blade came down and killed the starving Artist, he began more of the insanity that had ended the last game by powering out an Empty the Warrens for four. Luis had a Boldwyr Intimidator to eat a Goblin a turn, and since he was still at 15, it seemed like he would be fine for now. Steve wasn't intimidated, though, and he sent his Goblin army across the line. Thanks to a Haze of Rage with and then without buyback, he took a huge chunk out of Luis' life total, putting him on a precarious 3. Luis had a Fatal Attraction to kill off another goblin, but it wasn't enough. Steve untapped and dropped a Rift Elemental which ate the last counter off of his Arc Blade. That was good enough for Luis, and the match was over.