Round 8: Flipping the Burn

Lebedowicz and Ruud Warmenhoven nearly stole the spotlight for this feature match, but Osyp's retelling of Ruud's tales of debauchery convinced me that this French feature match was far more civilized and printable, in spite of most of the dialogue between the players coming in French. 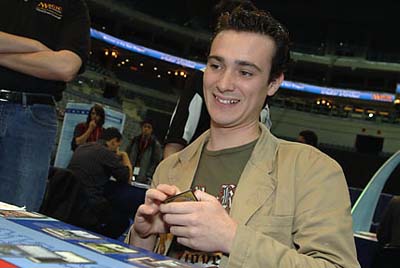 Pierre Canali had another Day Two on his resume.

Since his Pro Tour victory, Pierre Canali has spent nearly 18 months proving to the Magic world that he is far more than a fluke. To anyone who has been paying attention, Canali's efforts have been rewarded - Pierre can play. If you don't have respect for his skill and how hard he works at being good at Magic, then you simply don't have respect for the game. The dashing French dance instructor is an inventive deck designer and has surprised with the quality of his Limited play here this weekend, proving his skill set is even well-rounded.

Unfortunately for Pierre, the man sitting across from him doesn't lose much either. And by much, I mean hardly ever. The Ruel surname has been seen in Magic Top 8s so much in the last two years that it's actually getting boring. Oh gee, another Ruel Top 8… yawn. While Olivier's consistent success might be getting old to some, his sense of humor and showmanship in the feature match area is always sure to draw a crowd. Olivier drafted a nearly two-color Izzet deck during the draft, only splashing for a few black cards. Canali, on the other hand, has a four-color special, playing every color except red and running some bombs like Debtors' Knell. Both decks seem to want to play a controlled tempo game, and it will be interesting to see which one comes out on top.

Ruel kicked things off with a Tin Street Hooligan and Rakdos Signet, while Canali cast Master of Impediments only to see it die to a Riot Spikes, while Olivier pressed the advantage with a Torch Drake. Ruel beat down with his creatures and then transmuted Muddle the Mixture for Pyrotechnics, further complicating Canali's situation. Plagued Rusalka and Seal of Doom made sure that Canali could take care of both of Ruel's creatures, but the tricksiest of Carom tricks from Canali made certain that his Plagued Rusalka did no more than trade with Ruel's Hooligan, and a further pump of Ruel's Torch Drake brought Canali to 8.

The bleeding staunched, Pierre switched to attack mode, tossing an earlier Civic Wayfinder into the red zone before casting Debtors' Knell. Bong! Bong! That was the sound the crowd heard as Ruel's chances of winning quickly slipped away. Master of Impediments made a return appearance for Canali, followed by a pumped Ghor-Clan Savage. Vedalken Dismisser put the Savage back on top of Canali's library, but the same turn repeated itself a turn later, this time with Torch Drake joining Ruel's team. At this point it was all over but the shouting, though considering the Pyrotechnics Oli flashed me right before he conceded, Canali was considerably closer to dying than anyone could tell.

Canali was the first to spring into action this game, casting Plagued Rusalka followed by Shielding Plax, while Ruel cycled a Quickchange and again transmuted Muddle for Pyrotechnics. Helium Squirter gave Ruel a reasonably-sized beater, and Vedalken Dismisser shooed Canali's Ostiary Thrull back to the top of his deck, adding a counter to the Dismisser in the process.

Canali recast the Thrull, but Ruel stayed completely on top of the tempo in this one, using his fire to burn away the Thrull and then beating down with a growing army of fliers that Canali could just not deal with. 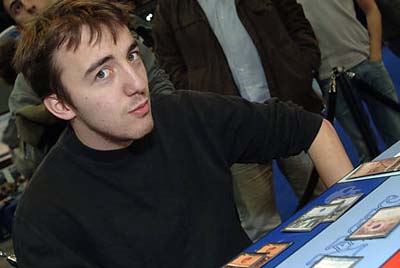 Staring death in the face…or just our photographer.

The final game was again about tempo, with both players starting strong this time. Canali cast a turn-four Moroii to contend with Tin Street Hooligan and Helium Squirter from Ruel. Canali traded Verdant Eidolon for the Hooligan, but Ruel added a Silkwing Scout to his team to keep the pressure on, and then went for the jugular with Dismisser on the Moroii.

Canali was able to weather the storm and obliterate Ruel's board, but Ruel's damage and Pierre's Moroii had left him in burn range, making each of Ruel's draws an excruciating experience for Canali.

Pierre attacked with all of his men and dropped Olivier to 9, adding a Stone-Seeder Hierophant to his board to give him lethal damage. Olivier simply flipped his next card into play just like he had championed Craig Jones to do in Hawaii, and waiting for him was one of his two copies of Pyrotechnics plus a match victory.