Round 8: Frank Karsten vs. Ben Seck

Both Frank Karsten and Ben Seck are visiting Atlanta from afar. Ben hails from Australia, and this is just one stop on what he's calling his "World Tour". Frank is from the Netherlands, and is part of a strong Dutch team who has come over early to test for Pro Tour – Boston. Both of these players were sitting at 5-2, and really hoped that a win would land them in the Top 64.

Frank led Game 1 with an early Compulsion, a necessary component for a Wake victory. Turn three he took a big chance by playing an Exalted Angel face down, leaving her wide open to the Smother that Ben gladly dropped on her.

"Doomed Necromancer," Ben announced, putting the card on the table. Frank swiftly countered it, using Mana Leak while Ben only had one land open. Frank's turn passed uneventfully with him dropping a land and passing the turn back to Ben.

"Mesmeric Fiend," Ben announced. A long pause followed. The ability of the Mesmeric Fiend can be very difficult for Wake to overcome, losing a key card to the black/red Reanimator build of Ben Seck. 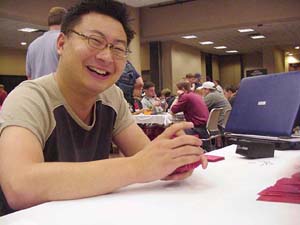 "Off the top," Ben announced, setting a card on the table. Someone watching the match had to ask what card that was, the card was a foreign language Buried Alive, and Ben started searching for items to bury. Arcanis, the Omnipotent, Anger and Undead Gladiator all went the graveyard. At the end of the turn Frank started Compulsioning cards away. A Wrath of God and a second Compulsion went to the graveyard, until Frank stopped on Deep Analysis. Deep Analysis played and flashed back refilled Frank's hand.

Ben Zombified his Arcanis in an effort to refill his own hand as well.

"No attack," Ben corrected. "I know you want me to attack, but I'll draw cards instead," he quipped.

"But I want you to attack," Frank said.

Ben drew his three cards and passed the turn.

A few turns passed before Ben ripped a Cabal Therapy. "Mirari's Wake," Ben announced. Two copies of Wake hit the yard, and Ben did a little happy dance at the table. The Therapy left Moment's Peace and Decree of Justice in Frank's hand.

Frank Compulsioned away a Moment's Peace and cycled the Renewed Faith that that got him. Left with nothing but two lands in his hand after that he passed the turn.

"Upkeep," Ben announced, deciding to use Arcanis to draw three cards before he even got to his draw step. The card advantage he had gained by this time had given him complete control of the table. He shamelessly exploited that card advantage to cast a second Buried Alive, putting Akroma, Guiltfeeder and Phantom Nishoba in the yard before stitching up the Guiltfeeder.

"This has to be good, or I'm screwed," Frank mused. He ripped the top card off of his deck and found...an Island.

"Is it good," Ben asked. Frank was able to use a Deep Analysis to dig up two more cards, and one of the them was the Exalted Angel. He decided the Angel wouldn't help and used Compulsion to dig up one last card, leaving four mana open to cast Wrath of God. Wrath didn't show, and Frank scooped his cards.

"This is my fifth Mirari's Wake match," Ben announced between games. "I've played one match all day against non-Mirari's Wake. I'm getting good at it."

Talk turned to the Invitational between the players, as they discussed how they'd go if they were voted in, but that they won't become those people that only write because they want to be voted in. Jeroen Remie came over as Game 2 was starting, announced that he had made day two and there was much celebration.

"Mana Leak," Ben announced, placing Cabal Interrogator on the table. Frank certainly did have the Mana Leak, and the Interrogator went into the yard. A Last Rites from TBS pulled Cunning Wish and Mirari's Wake from Frank's hand

Frank had led with an early Compulsion, but wasn't using it much yet. When Ben cast a Mesmeric Fiend he left Frank with some tough choices. Frank could cast Mana Leak or let Ben choose between taking Mana Leak or Exalted Angel.

Frank chose the latter, and Ben took the Angel. Frank was left with nothing in his hand except a Mana Leak, which still had some value in the game with Ben stuck at four lands, but Ben had Frank on a clock. The Mesmeric Fiend turned sideways, sending Frank to nineteen life.

It may be a long and slow clock, but a clock is a clock. At the end of the turn Frank made the choice to Compulsion away his Mana Leak, leaving him with a hand of Deep Analysis and Plains. The Deep Analysis fetches a Mana Leak and a Rewind, but neither one was cast when Ben played Cabal Therapy.

"Doomed Necromancer," Ben asked as he placed the card on the table once again. The Necromancer was met with a Rewind from the hands of Frank, who seemed quite comfortable in the matchup. The end of Ben's turn five Soldier tokens hit the table, invited there by the Decree of Justice.

Frank cycled a second Decree of Justice, adding six more Soldiers to the table. Ben could do nothing but scoop and get ready for Game 3.

"I'll concede this game," Ben said. "Then I'm going to ask you to concede the match though."

The two players talked it over and agreed to a 50% split, but the joking continued. Ben already owed Frank $225.00 from the colony, and now needed to make Top 16 at this event just to earn $15.00 for himself.

"I will mulligan," Ben said. He was given some condolences by his friend, who had just returned from the Dawn contest. 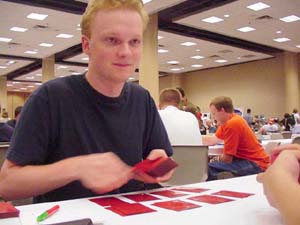 Ben led things off with a turn two Interrogator. Nonplussed, Frank played a turn two Compulsion. A Last Rites for two from Ben nets him two copies of Cunning Wish, right out of Franks hand and into his graveyard.

Ben then started to get the Interrogator working. He tapped him to look at three cards and Frank protected the important one, Mirari's Wake. A Skycloud Expanse did end up going to the graveyard though. The second activation saw Frank still protecting Mirari's Wake, but now he was holding two of them and Ben was able to get one copy of it in the graveyard.

Frank flashed back Deep Analysis, trying to keep his hand size up high enough that he could avoid exposing Mirari's Wake to Ben's discard ability.

Still protecting Wake, he exposed both Wrath of God and Exalted Angel to Ben. The Wrath of God went into the graveyard. Neither player was doing much of anything except drawing a card, playing a land and watching Ben activate his Interrogator. Exalted Angel got exposed again, and this time she went to the yard over Moment's Peace and Mana Leak.

Finally, Frank was able to get Wake on the board. "He cheats," Ben announced as the table rocked under the weight of the powerful enchantment.

Ben managed to destroy the last of Frank's hand, forcing him to play off the top of his deck for the time being. Each card he drew though was Compulsioned away until it became something he was happy with. He was finally happy when he pulled a Decree of Justice, which he cycled for seven Soldiers.

"Who doesn't cast that," someone from the crowd mocked. "You sir, don't like fun!"

The game state had changed dramatically, as Frank cycled himself into a very large army, capable of crushing TBS quickly. Frank added to the beatings with Anurid Brushhopper, which made several people wonder why he would make such a risky move, not keeping any card in his hand.

"If I pull Zombify or Stitch Together or Burning Wish, I win," TBS announced. He pulled the card off the top of his deck and looked again at Frank.

"I'm going to ask you to concede again," Ben said.

Frank pulled the results slip toward him, filled it out and turned it back toward Ben. The results slip said Ben won two games to one. Frank had conceded Game 3.