Round 8: French Leap to the Fore

a Round 6 exit from the Pro Tour on Friday, Player of the Year frontrunner Olivier Ruel has opened the door to his would-be challengers, including two of his countrymen sitting in the feature match area. 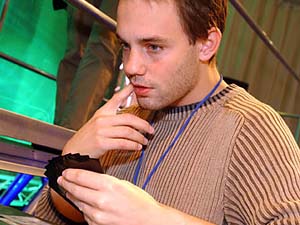 Antoine Ruel was still playing Saturday, unlike his brother.

One of these challengers is his brother, who until recently had posted results nearly as impressive as Olivier's. The other challenger is reigning Player of the Year Gabriel Nassif, who proved in Atlanta that he's not ready to let his title go without a fight, and is showing once again this weekend that he's more than capable of turning in results, regardless of whether the format is Limited or Constructed.

Nassif started things off with a turn-two Split-Tail Miko, while Antoine Ruel threw down a Soratami Rainshaper on turn three and followed that with Waxmane Baku on turn four, adding a counter to it on the next turn by casting a Rising-Tide Zubera.

Nassif's next play didn't happen until turn five with Sokenzan Spellblade. Nassif chose not to block on the next turn and Ruel tried to ninja him right out of the game, dropping Mistblade Shinobi and Ninja of the Deep Hours on his noggin. Waxmane tapped down a reappearance of the Spellblade and the ninjas went on the hunt again, dropping Nassif to nine, but losing the Shinobi to a blocking fox cleric along the way.

Nassif tried to stabilize the board with Oyobi, Who Split the Heavens, but Waxmane went to work again (snagging another counter from Dreamcatcher), tapping down the large spirit so Ruel could Shinobi it back to Nassif's hand, losing the Deep Hours this time to a blocking Spellblade.

Nassif paused for some time considering his next play before casting a Frost Ogre and then passing the turn, leaving mana up for the Miko. Down came Oyobi on the next turn, but this time Ruel chose to tap Nassif's Miko at the end of his turn, opening the way for… well for nothing, actually. Antoine simply chose to cast Oboro Breezecaller and Soratami Rainshaper, walking right into a Yamabushi's Storm that gave Nassif a 4-for-1, shattering Ruel's team. The reigning Player of the Year's big beaters swept up the pieces to give Nassif a 1-0 lead. 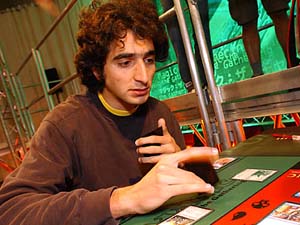 Gabriel isn't ready to give up his Player of the Year title.

Ruel chuckled briefly when he played a one-drop Dreamcatcher on turn two, but his amusement quickly evaporated when Nassif threw a Samurai of the Pale Curtain onto the board and followed that with a Shinen of Fury's Fire.

The Shinen traded with Dreamcatcher so that no ninja shenanigans would take place, but that just postponed them a turn until after a fresh Oboro Breezecaller attacked, leaving a Ninja of the Deep Hours in its place. Nassif continued to build his army with an Akki Underminer and Kitsune Blademaster, and then used Barrel-Down Sokenzan to send the Zeppelin-like Sire of the Storm up in flames.

Ruel showed his deck was not bereft of removal as well, using Hail of Arrows to take a large board advantage, leaving Nassif with nothing to Ruel's Breezecaller. Sokenzan Spellblade remedied Nassif's threatless situation in a hurry, breaking through to hit Ruel for seven. Nassif then finished the match by doming Antoine with Spiraling Embers.