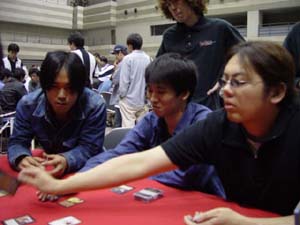 Frenetic EfreetFrenetic Efreet are feeling great after demolishing the competition on Day 1, emerging as the sole undefeated team. The powerful mix of Osamu Fujita (ex of Anchans) and two former National Champs Tadayoshi Komiya and Tsuyoshi Douyama just need two wins to put a lock on a Top 4 berth.

The 6-1's who drew the short straw are S.S.D., Naoki Kabouchi, Shuuhei Nakamura and Kimio Imai. A popular team, they are somewhat overshadowed by the flashier groups of pros. Nakamura is the mastermind here, and is a player of no small talents.

The draft was odd, with Fujita having a pair of Savage Firecats before the end of the first pack. S.S.D. floundered a bit, suffering communication problems, but it seemed like their straying into tri-color decks was more intentional than disastrous. Nevertheless, Frenetic Efreet were all smiles at the draft's close, and S.S.D. wore looks of concern.

Fujita agonized over his opening draw. It was six lands and a Springing Tiger. He just couldn't bring himself to throw it back. Kabouchi made him pay for his lack of early pressure with a pair of Basking Rootwallas. By the time Fujita got the Tiger on board, Kabouchi was ready with Angelic Wall.

Beside him, Komiya was suffering for his decision to run three colors. He was without islands in his black-blue-red deck. Nakamura had lots, and was flying over with Skywing Aven unopposed. Komiya did manage a Ghastly Demise for a Broker, but without islands he couldn't put up any flying defence. The Aven found friends, and then it was over.

At the far end of the table, Imai was in trouble against Douyama. He had very little early beatdown and that just let Douyama work his Cephalid Looter. Soon he had Stern Judge and Aven Windreader working over his opponent's life total. Embolden made sure that Douyama would not be stopped.

Unsurprisingly, Komiya didn't manage to win when his only spells were Malevolent Awakening, Skywing Aven, Syncopate and Shadowmage Infiltrator. Had Nakamura not been playing black, Jonny Magic probably would have run wild, but as it was, Komiya's twelve lands did not provide adequate smashing, and Frenetic Efreet were down a match.

An early Pardic Collaborator from Imai was making things tough on Douyama. A bit of chumping with Kingfisher and a little fancy Embolden footwork made sure that he didn't get hit too hard. He found a bit of offence from Mystic Zealot and Aven Windreader, and just as his temporary measures fell through, he topdecked a forest to slam down Mystic Enforcer. Imai groaned. He tried for a last-gasp double Reckless Charge all-out attack, but to no avail.

Kabouchi had all the right tools against Fujita's green-red. Despite a lucky Sonic Seizure that caught Violent eruption to take down both Mystic Zealot and Aven Flock, Kabouchi was entirely on the offensive. His Dwarven Strike Force backed by Embolden and Moment's Peace were too much for Fujita to handle. His twin Savage Firecats were nowhere to be found. 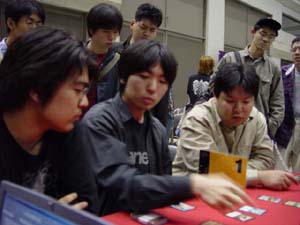 S.S.D.But then came a reprieve. After forcing Embolden twice with Muscle Burst and lands sacrificed to Lithatog, he was forced to try and kill the Strike Force one more time. Here, Imai forgot the Moment's Peace in his graveyard, and so traded his Strike Force for the pumped-up Lithatog.

That seemed to be the turning point. While Kabouchi hit for two with his Mystic Familiar, Fujita laid down Barbarian Lunatic and Pardic Lancer. Kabouchi flashed back his Firebolt to take out the Lunatic and then Fujita found Springing Tiger. Moment's Peace was just that. They were 1-1.

The final game was tense, with just ten minutes remaining. Kabouchi started with Mystic Familiar and Basking Rootwalla. Fujita answered with Skyshooter and Springing Tiger. Kabouchi tapped out for Nantuko Disciple and Fujita struck, slappinng Seton's Desire on his Springing Tiger and swinging for five. Lithatog was also in on the action. Now Kabouchi was on the defensive.

He did an admirable job. Kirtar's Desire made the Tiger a non-issue, and when he left his Disciple vulnerable after taking down Skyshooter, he had Shelter to protect it from Sonic Seizure. Then came Aven Flock to start dealing damage again, and all this time all Fujita could find were lands. Time was called, and Kabouchi was just two attacks from victory. Fujita found no answer.