Round 8: Gab Tsang vs. Kenny Hsiung 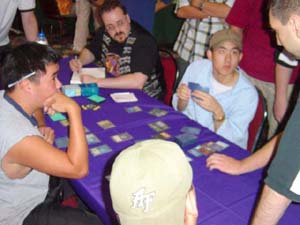 It was the eighth round for the night, and the game was just for glory. Both Gab and Kenny had their seven-plus records and were locked for Day Two, but apparently neither of them felt like quitting; while the room around them was so filled with byes that it felt like the last day of school, these two guys decided to slug it out.

The roll was made, and Gab chose to go first. Gab's packing a blue-green deck that's not quite madness, not quite threshold (but more madness than threshold) and seems to have just a little bit of everything in order to handle various decks. Kenny, his opponent, is playing the blue/black Infestation combo that seems to have become a bit of a second-tier favorite; it's one of those decks that really should be in your test gauntlet, but it's one of the first ones you drop if you only have an afternoon to playtest and you're pressed for time. (Of course, if you only have an afternoon to playtest you probably will be reading reports instead of, you know, playing in them... but what the heck.)

Gab led off with a Rootwalla, while Ken just dropped an island and prepared to counter stuff. Sure enough, after the first attack from the 'Walla, Gab got down to some Careful Studying; Kenny debated for a moment, then let it through, indicating that he either had the Envelop or wanted Gab to think he had one. Ah, control. In any case, Gab was unfazed by the threat of not studying, and dropped both Roar of the Wurm and a maindecked Moment's Peace into the boneyard, waiting eagerly for flashback. Kenny uses his turn to drop a convenient madness outlet in the form of Zombie Infestation.

Turn three, and Gab missed his land drop but cheerfully dropped a second Rootwalla as Chainerbait and attacked. Sure enough, when his turn rolled around, Kenny took the bait and tried to Edict, but Gab had an Envelop (also maindecked) to handle it. Kenny thought, then dropped a 2/2 onto the board via Zombie madness, paying for it with a Circular Logic that also countered the Envelop. (Read it again, it makes sense. Trust us.) In any case, a Rootwalla hit the 'yard.

Gab attacked and Kenny blocked with the token; the token died once Gab pumped the 'walla, using up all of his available two mana, but an Innocent Blood dispatched it, setting the board creature-free again. Gab got a land, thankfully, but can cast nothing; Kenny took advantage of the momentary standoff to drop a Standstill. Gab wasted no time in handing a free three cards to his opponent with a Quiet Speculation - but unfortunately, one of those three cards was a Circular Logic. The Logic got dropped via zombie madness again.

The 2/2 zombie attacked twice more while Gab flailed about for land, still not finding any and stuck on three while he missed two land drops; Kenny took the opportunity to hard-cast a Deep Analysis and charge up his hand some more. Finally Gab got a fourth land and Reclaimed the Deep Analysis; Kenny partially emptied his hand to produce some more pressure in the form of another 2/2 and then cast Standstill. Again.

"How many cards do you have?" Gab asked. "Two?" Kenny nods, and Gab had to chance it; he cast Deep Analysis to break the Standstill. At this point, Kenny had the Envelop... But on the other hand, he'd been pounding Gab fairly definitively, and he had Edicts to handle whatever creatures Gab could cast. He let it resolve. Gab took a deep breath and drew the cards, then passed. Again, the zombie mob hit.

Gab looked at the board - and evidently his hand was light on threats, since he decided to chance an Analysis again. He paid the life; Kenny thought long and hard before finally letting it resolve, apparently deciding that whatever creature Gab created could be handled nicely by the Burst and Edict in his hand; sure enough, the Dog was bounced back to the hand and the tokens smashed in again.

Gab Careful Studied into a double-Wonder drop and cast Mongrel again... But now it was time for Kenny to ask the question. "How many cards?" he asked, and Gab has three. He Edicted the Mongrel, and it went to the graveyard - along with Gab's hopes of victory. Game over, man, game over. 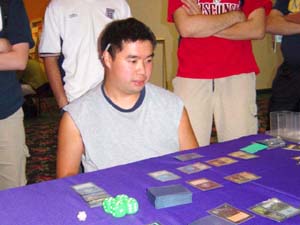 Gab winced the next turn as he laid a land and cast Quiet Speculation... And sure enough, Kenny had the Envelop for it. It fizzled harmlessly as Gab used his remaining mana to cast a Sylvan Safekeeper, which then got Edicted. Poor Olle.

Gab, undaunted, produced a Wild Mongrel, which resolved. It looked bad, and he must have known it; he was down to two cards while Kenny had six, some of which presumably were gas. Kenny cast Infestation on his turn, and Gab responded by popping out a Rootwalla via the convenient Mongrel outlet. (You wouldn't think a small lizard and a crazed dog would work together so well, but you'd be surprised.) The next turn, Gab swung into a clear board, practically daring Kenny to Infest and lose a token - but Kenny decided he could take the hit and went down to fifteen from Mongrel and a very puffy Walla.. He laid a land and passed.

Gab attacked again, this time meeting a Ghastly Demise in response to pumping his Rootwalla. The Rootwalla vanished with a whimper, and Kenny tried to gas up his hand enough to start creating 2/2 tokens by casting Deep Analysis... Which got Enveloped. Though he could have Logic'd that, Kenny chose to save his Logic for a greater threat.

Gab went for Spec #2, which met Kenny's Envelop #2, but that durned hound knocked Kenny down to eleven. He flashed back Deep Analysis for two mana, forgetting about the Catalyst Stone adding an extra two to the cost; Gab was willing to just let him pay the extra mana, but he called a judge anyway to verify and get the official word - take the hint, you players! Even if it seems logical, call a judge!

Anyway, the Judge concurred with Gab's deep analysis of the situation; Kenny should just pay the mana and received a Procedural Warning. Since he had no previous warnings, this meant bupkiss. The game continued. 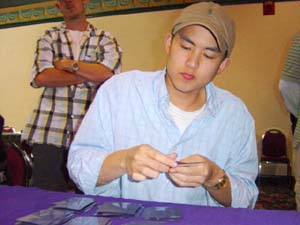 The Mongrel continued its assault, snapping and biting Kenny down to six. Gab cast Wonder to add pressure, but it met a Ghastly Demise the moment it hit the board. Unfortunately, Kenny's hand was the control player's nightmare: He had a hand full of Logics and Envelops, but nothing to deal with the threat that was actually on the board. Gab attacked, and though he could drop his whole hand and end the game right here, he didn't know that; rightfully afraid of a well-timed Burst, he gave Kenny another turn to draw an answer. His answer, however, was, "A quick and merciful death"... And the next turn, Gab dropped the two cards to the Mongrel for the win.

He cast a Wonder, which was Edicted, but never found a green mana in any of his draws, and died with a fistful of two Mongrels, two Rootwallas, and an Acorn Harvest.