Round 8: Gabriel Nassif vs. Ben Ronaldson

Gabriel Nassif is one of a rising crop of young French stars. He was part of the Les Plus Class team that finished second in Pro Tour-New York last year and has a number of solid finishes to his credit. Ben Ronaldson is known through the extensive testing and deck building he does at the palace for team Godzilla. His task will be difficult as Gabriel Nassif appears to have 'Protection from English' as far as I can work out.

"Look at my deck afterwards and you will laugh. I considered dropping when I went 2-0." – Ben Ronaldson

In the first game Nassif went first. Ronaldson couldn't really gain any advantage off the acceleration provided by a Millikin and had a Patriarch's Desire stolen by a Mesmeric Fiend.

Ronaldson picked up and showed the Putrid Imp the Millikin had fortunately milled into the graveyard as evidence of his shaky deck. It wasn't all bad as he used a Diabolic Tutor to go hunt for a Stalking Bloodsucker. He missed a land drop however and had to drop a Strength of Isolation on the Millikin to save it from Nassif's Torturer.

"Your deck is almost crap," Nassif said as Ronaldson finally dropped the vampire.

Nassif meanwhile was prepared to race with a Hydromorph Gull and Aven Windreader after he'd already drawn four cards off a Deep Analysis. A Second Thoughts stopped this plan, but Nassif could sacrifice the Gull to prevent Ronaldson drawing a card.

Nassif then got rid of the Bloodsucker with Waste Away only for Ronaldson to show him why his 'crap' deck had done so well by bringing it straight back into play with Zombify. 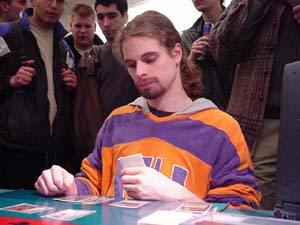 Ben RonaldsonMissing the land for a turn had been costly for Ronaldson though as Nassif Repelled the Bloodsucker and then loaded up his graveyard with Breakthrough so that his Organ Grinder could finish Ronaldson off over two turns.

Game 2 started with some nice synergy for Nassif as his Cephalid Looter chucked away an Obsessive Search and he then played Psychatog. His Aven Windreader also looked a lot better than Ronaldson's Dusk and Fledgling Imps.

A Mesmeric Fiend was pronounced "savage" as Ronaldson was forced to drop his Strength of Isolation on the Fledgling Imp through madness. Nassif took a Gallantry over Grotesque Hybrid though.

The enchanted Imp and Hybrid brought the game into a creature standoff but with a Looter in play and after drawing four cards off Deep Analysis the Frenchman looked favorite to draw a breaker first. 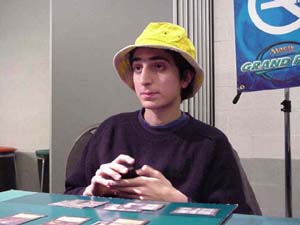 Nassif had breakers though – a Caustic Tar and Whispering Shade to cause headaches for the Englishman. Ronaldson had to get aggressive and started attacking with the Hybrid.

The Windreader revealed Ronaldson had a Diabolic Tutor coming. He decided to attack with all his creatures apart from a Mystic Familiar and Torturer, using that to make sure a Dusk Imp traded for a Windreader.

This was a risk as he had only the Familiar to block with. Waste Away got rid of that and Nassif charged in for the kill.

Then Ronaldson revealed what he'd Tutored for and why he'd left 1G open. Moment's Peace!

It was a nice plan and would have worked had Nassif not been holding Syncopate.