Steve OMS is thought of as one of the Neutral Ground guys - from New York City - and that is indeed where he got his start. However, Steve is now in college at Boston University (he's an econ major) and he does his practice drafting at Your Move Games. So in some ways this is his home town Grand Prix too. With 3 Grand Pix wins to his credit, an additional GP Top 8 at the last Grand Prix Boston, and yet another Top 8 at the most recent domestic GP (in New Orleans), Steve is clearly one of the best Grand Prix players in the world. Gary Krakower is no slouch either with a win at Grand Prix Austin on his resume. Krakower's red/black/blue deck and Steve's (2-color) black/red got them each 6 wins in the first 7 rounds. The loser had to sweat his tiebreakers after the round, but they were each very likely to advance to Day 2. 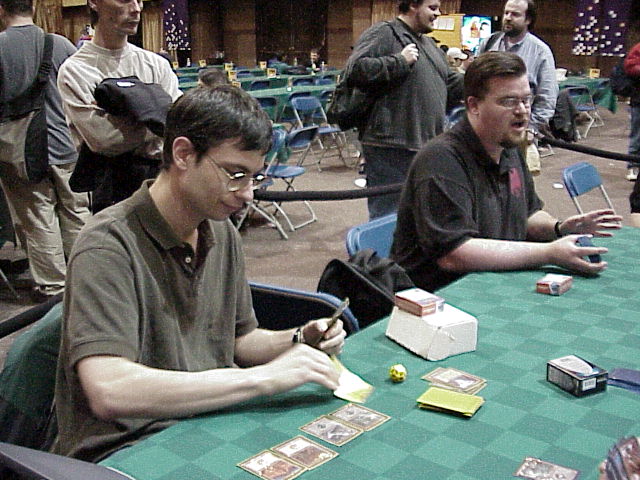 Game 1 was bloody as Krakower's Scorching Lava took out a Sinister Strengthed Ravenous Rat, his Magma Burst took out Urborg Shambler and Darigaaz's Attendant, and then his Agonizing Demise (with kicker) took out a Callous Giant. If he'd had any offense other than Morgue Toad he might have won the game. When Steve Recovered Callous Giant, Krakower's Flametongue Kavu sent it to the graveyard too. However, Steve had some removal of his own - enough to remove Krakower's Morgue Toad even after Gary saved it with Rushing River. With Steve on the ropes, Krakower proceeded to draw land after land after land - 16 total before Steve finally stabilized and was able to attack and kill him.

Game 2 was all about dueling 2-for-1's. Gary played a Rat, Steve played an Urborg Shambler, Gary played a Flametongue Kavu. When Gary followed up his Flametongue with a Tribal Flames pointed at Steve's Lava Zombie and dropped a Kavu Aggressor, Steve had issues. His only available play was to Zap a 2-toughness creature and hope to draw something. A Kavu Aggressor of his own didn't help and a brutally quick game 2 ended when Krakower used Agonizing Demise to deal the last three points of damage. 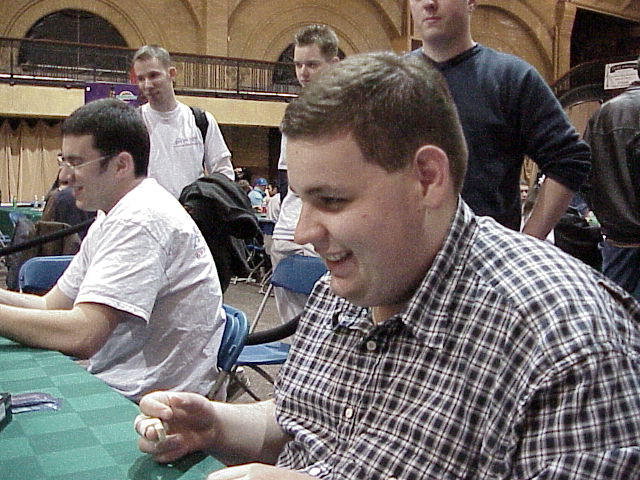 Game 3 was bizarre, as both players seemed to have twice as much removal as they had creatures. Krakower's hand on turn 6 was Scorching Lava, Terminate, Tribal Flames, and Magma Burst. A great hand, but his board was just Power Armor and land. Steve just had a Thunderscape Familiar and a Ravenous Rat. Krakower couldn't bring himself to kill the rat but he did tap his one red mana to Flames the Familiar. Steve made him pay when Steve drew Lava Zombie. Gary found himself obligated to kill every creature Steve played and - eventually - Krakower ran out first. Disgusted with the way his deck kept delivering up land instead of monsters, Krakower left the Feature Match area shaking his head.