Round 8: Gary Wise vs. Alex Shvartsman 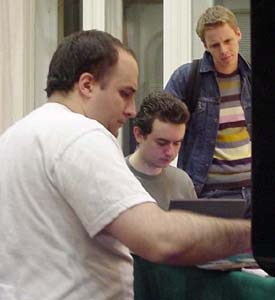 Both players badly need to win this round otherwise it's a day of sight-seeing and sitting on the beach for them tomorrow. A year ago it was Gary Wise who was celebrating a success fresh off of Pro-Tour New York, but this time round it's Alex with the best recent finish as he placed third at this year's team Pro-Tour. Since moving to England, Gary's Pro Tour finishes have left a lot to be desired and a bad finish at Pro Tour San Diego could even see him return to the PTQ circuit.

Gary elects to draw first and is audibly happy about no second turn Mongrel from Alex's green deck. A third turn Farmhand with no third land has to be one of the weakest plays ever from Alex but Wise has nothing but a Sandstone Deadfall, so the Farmhand hits for first blood. Alex draws land, and the first interesting trade is when Wise's Aven Fisher blocks a Leaf Dancer. Alex has no trick, leaving Gary both surprised and happy with the trade. Wise gets a Looter and seems happy that it'll stick around for a while as Alex uses the Farmhand to fetch a Plains.

The Dreamwinder Serpent that Alex casts gets a "Yup, pretty good" from Gary next turn however. Gary plays a Famished Ghoul in the hopes of trading and Alex attacks daring the block. Wise bites, but the Serpent is saved with Embolden. Wise Loots into Morbid Hunger which clears the board and Alex's next turn of "...go" is accompanied by much swearing as he fails to play a fifth land. A Peek from Wise reveals Aether Burst, Syncopate, five mana fatties and an Elephant Ambush, which hits play during Wise's next end step. A Gravedigger from Wise returns the Aven Fisher, but the Elephant continues to swing. Alex finds his fifth land and the first of his fatties - Gorilla Titan hits play.

Wise swings the game in a huge fashion on his next turn as he drops Sadistic Hypnotist and sacrifices it, his Gravedigger and his Looter to clear all six of Alex's spells from his hand. The next turn the Elephant token gets Aether Bursted, the Titan sits helpless under a Kirtar's Desire and Wise begins to mount an offence of his own with Aven Fisher and Psychatog. A Nantuko Disciple throws itself in front of the 'Tog a turn later making itself a 6/6 with the aid of a Sylvan Might but after Wise's early Looting the 'Tog still takes it out and lives. Alex is playing from the top of his library at this point and can do nothing but watch the Aven Fisher fly over the top. Wise plays a Chamber of Manipulation threatens to stall the board indefinitely and so he starts throwing Morbid Hungers at Alex's head. A second one from the hand and two Flashbacked hastens Alex's demise and Gary soon has a 1-0 lead.

A second turn Werebear accelerates Alex into nothing as it swings for one on turn three. Alex successfully Predicts he has an Island on top of his Library and finally uses the Werebear for a Rabid Elephant. Still no creatures for Wise as he drops a Sandstone Deadfall but he obviously feels it's a little early in the day to go sacrificing lands. Morbid Hunger on Alex's Cloudchaser keeps Wise's life total fairly high but the Elephant and Werebear continue to beat. Alex Syncopates a Limestone Golem from Wise and his next attack takes Wise to ten.

Chamber of Manipulation stalls things for a while but Alex continues to develop his board with a Wild Mongrel and Nantuko Disciple. A Peek reveals a Sylvan Might in Alex's hand but there's little Gary can do to play around it as the Chamber has rapidly depleted Gary's hand. The turn Wise doesn't borrow the Elephant for potential chump-blocking purposes, he faces an attack from all of Alex's monsters. Together with some well placed Mights and some discarding of lands to the Mongrel, this gives Alex Threshold and a 4/4 Werebear. Wise just takes too much damage to recover from.

A Peek from Gary reveals a fine mana draw and curve as Alex shows lands of each type, Leaf Dancer, Dreamwinder and Mystic Zealot. A top-decked Mongrel enters play on turn three for Alex only to find itself staring at a Psychatog. Alex comments this is a little unfair as Wise gets +3/+3 for his two discarded cards versus just a +2/+2 for the Mongrel. Alex chickens out of attacking and instead just plays his Serpent.

Wise plays a Famished Ghoul capable of trading for the Serpent and suspects the board is stabilized again. Alex, however, swings with both his guys causing Gary to complain loudly about what Alex must've drawn. He doesn't balk at blocking though and puts his creatures in the way of Alex's. 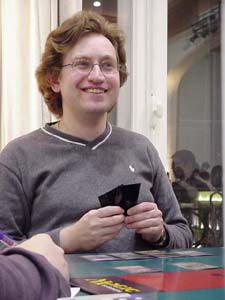 Much discarding of land ensues as the Psychatog and Mongrel race to see who can be fattest. A 5/5 Wild Mongrel eventually dies to a 5/6 'Tog and the Tog and a Dirty Wererat stall the ground versus Alex's remaining Zealot. The Psychatog begins attacking for a point a turn but returns to blocking duty when Alex makes his Nantuko Disciple again. Wise has five mana and needs to draw a land for his Morbid Hunger... he succeeds but it's a Seafloor Debris unfortunately and the Disciple gets active. A Cephalid Scout adds some much needed evasion to Alex's side of the table, in addition to providing a way of cycling through excess lands. With the Scout in play Alex can easily hit Threshold, and Wise is forced to Hunger the Werebear before it becomes 4/4. The now 3/5 Flying Zealot looks threatening for all of a turn before it gets pacified by a Kirtar's Desire. The Disciple still causes Wise numerous headaches however, and the Scout and a Dreamwinder Serpent start tearing big chunks out of Gary's life total.

Alex's Scout continues to turn excess lands into something of potentially more use, and his Disciple makes blocking decisions very difficult for Wise. A Limestone Golem and the Psychatog team up in an effort to take out Alex's Dreamwinder but when Wise pumps the Psychatog it gets Repelled by Alex and Wise can only sac the Golem put the Tog back in his hand. Wise is finally able to trade his own Serpent and a Wererat for Alex's Serpent when he clears the Sylvan Might out of Alex's hand with his Hypnotist. The Scout beats for three a turn though and Wise Gravediggers back his Golem in an effort to draw an answer. Alas the most expensive cantrip in the word ever doesn't find an answer for Wise and he succumbs to the Scout a turn later.