Round 8: Gary Wise vs. Antoine Ruel 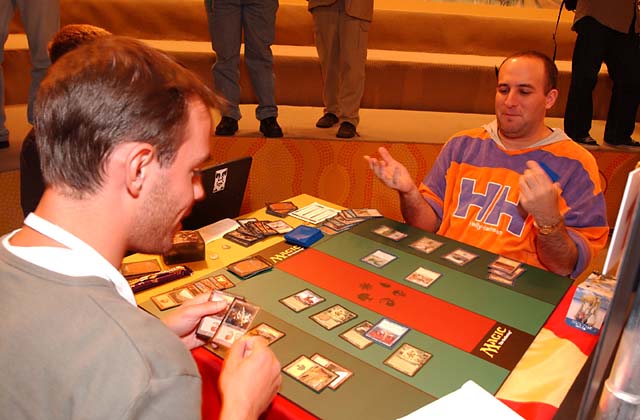 Wise started off with Hapless Researcher, while Ruel had Seton's Scout. The Researcher got through for a point, while Pilgrim of Virtue stayed back on defense. Ruel killed it off with Sonic Seizure, and Wise asked for a die to roll rather than picking a card. He borrowed one from Itaru Ishida at a nearby feature match table and rolled, revealing Fiery Temper. "Hey Itaru, next time lend me a different die." Wise build up his side with Mystic Zealot and Aven Flock, while Ruel had Phantom Centaur. With Wise tapped out, Ruel burned away the Flock with Sonic Seizure, and Wise borrowed another die from Ishida. This time, Anger was randomly discarded, which got a good laugh out of the onlooking crowd.

The path was now clear for the Centaur, and it dealt five damage. Wise summoned Battlewise Aven, and Ruel played Longhorn Firebeast. Wise countered it with Rites of Refusal, discarding an island. This left him with no cards in hand, but he now had threshold, making his Aven bigger. The Zealot and Aven double-blocked the Centaur, bringing it down to 3/1 while the Aven died. Wise peeled Hydromorph Gull off the top, with a "I was holding it!" Ruel summoned Springing Tiger, and was two cards away from threshold. The game was now at a standstill, with both players hesitant to attack. Wise surprised everyone watching when he played Coral Net on Springing Tiger. 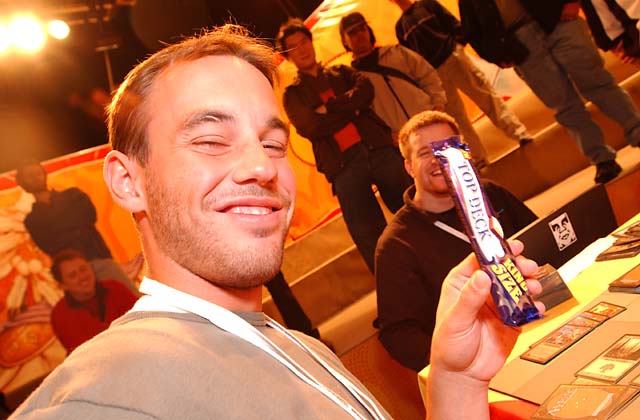 If Coral Net was a surprise, Ruel had a better one. He tapped four mana, and summoned another Phantom Centaur.

Wise then suggested his own spelling, which was not appropriate for all ages.

Ruel opened with Chatter of the Squirrel, followed by Seton's Scout. The Scout was enchanted with Coral Net, and headed right to the graveyard on upkeep. Wise then played Aven Smokeweaver to hold back Ruel's squirrels. When the fourth turn came around, Ruel brought out Phantom Centaur. 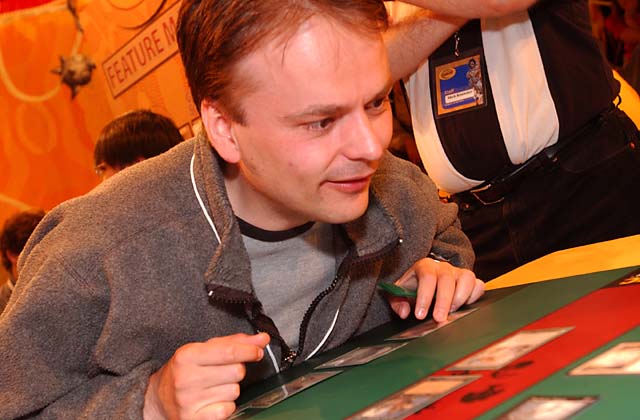 On the next turn, Ruel played another Centaur.

Wise- "When you said you had two, I thought you meant you had two in your deck!"

At this point, Ruel got the attention of Kai Budde, who was at the Feature Match table next to him.

1 Chatter of the Squirrel 1 Liquid Fire