Round 8: Gary Wise vs. David Humpherys

Dave "The Hump" Humpherys got what many believe to be the steal of the Auction: The "F" deck at six cards and ten life. Though that's not a lot to work with, "F" is choked with power cards like Flametongue Kavu and Fact or Fiction. It just needs to get its mana right. Wise bid aggressively on the "L" deck, packed with burn and Looters to smooth the way. He had no problem going to five cards and twenty life for it. They had played some fun games against one another, since they were out of the Auction early. Humpherys took them both.

Wise started with Lavamancer, then ripped island to get his Merfolk Looter on. Humpherys had an early Nightscape Familiar, but clearly needed red mana. Wise made a Cephalid Looter and started digging. By the time Humpherys did find a mountain, Wise was in full control. Lost in Thought shut down the Familiar, and Wise started coming through for damage.

Humpherys tried to bring back the bolt, but Wise was ready with Circular Logic. Memory Lapse on a Familiar let him come through for more damage. Circular Logic took it down for good, and then Lightning Blast stopped Faceless Butcher. Grim Lavamancer finished it off. 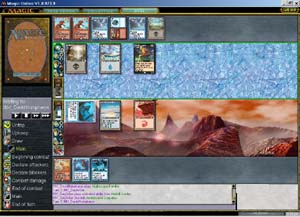 (click to open full-size in a new window)Wise's face fell as he took an inevitable mulligan to four. He did have two lands and Memory Lapse. Like the pro he is, he ripped Merfolk Looter off the top. Circular Logic Followed. Lapse shut down Stormscape Familiar for a turn, and after Grim Lavamancer got on the board things were looking pretty good.

Meanwhile Humpherys was lacking red again. His hand of two FTK's and a Fire/Ice mocked him. He cycled Ice and pulled up Fact or Fiction. Then he drew Nightscape Familiar. He played both, offered mountain or swamp, Fallen Angel, Fugue and Fact or Fiction. He took the mountain.

Now he started to take control. FTK took out the Grim Lavamancer, and he started swinging. When Wise had nothing to follow up he tried Fugue. Wise Looted and kept a card thanks to Logic. The second FTK took out a Looter. Wise played Cephalid Looter. Now, no matter what, he would have eight cards in his yard come his next turn. That meant a land pull would let him flash back Lightning Surge and kill Humpherys.

Humpherys swung and held his breath. Wise drew a blank, and they were on to Game 3.

Humpherys was off to a great start, with Wise suffering from a lack of action. He started with Nightscape Familiar and then an uncontested Fact or Fiction. He scored Fallen Angel and two mountains over bolt and Thunderscape Familiar.

Humpherys knew he needed to win quickly. Flametongue Kavu hit the Familiar, which regenerated. He worried about how he'd play his Faceless Butcher, but Wise gave him a target in Cephalid Looter. From there, it was clear sailing.