Round 8: Gary Wise vs. Francis Cormier 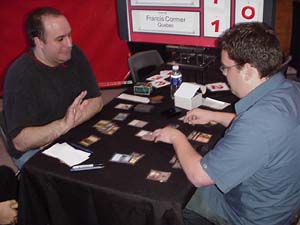 Gary Wise is eager to put away Francis Cormier. He's been running well so far, but after dropping his first match today, he'd like to do some wining. Wise will also tell anyone who'll listen that people will think he's crazy for putting Dawning Purist in the main and Wing Shards in the board. He's right. His opponent is Francis Cormier, a strong Quebec player, though not nearly so known as Gary "Mouth of the North" Wise.

Cormier mulled to start things off, then led with a face-up Skirk Marauder. That earned him a compliment from Wise, who thinks it's a play too few people are willing to make. Wise answered with Aven Farseer, and the two traded. Cormier cycled a Swat and was done. Wise played his third land and also made no play. Luckily Cormier tried to morph a Skirk Commando, and Wise cut it down with Dispersal Shield.

Now Wise started his offense with Keeneye Aven. Cormier shrugged and played a Rock Jockey. Wise hit for two and added Glory Seeker. Cormier played his fourth land, swung for three, and was done. Wise hit back for four and likewise made no play. Cormier tried Solar Blast, but Wise capitalized with Oblation, holding Dragon Scales and Mistform Skyreaver. All Cormier could do was make a Goblin Brigand, still stuck on four lands. 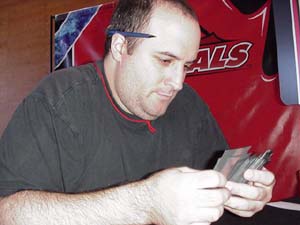 Wise untapped and dropped the Skyreaver. Cormier just shook his head. He cycled Spark Spray at end of turn, then untapped, drew and looked for an answer to the Bus. He had none. He played Crested Craghorn and swung with all his guys, provoking the Skyreaver. Wise traded his Seeker for the Brigand and took three, falling to eleven. He swung back for six in the air, then tapped out for a morph, Dragon Scales on the morph and a face-up Wingbeat Warrior. Cormier had a Crown of Suspicion for the Warrior, but it didn't matter.

Cormier mulled again for Game 2, but at least had decent early pressure. He led with Festering Goblin and Goblin Turncoat, but had no three- or four-mana plays. Wise soaked some damage, traded a morph for the Festering Goblin by blocking the Turncoat and then played Keeneye Aven.

Cormier smiled, and passed it back without making a play. Wise hit for two and played Aven Farseer. Cormier had to use Torrent of Fire to clear a path for his Turncoat. Wise's next play was Swooping Talon. Cormier made a morph, and Wise flew overhead for damage, choosing not to provoke, and then tapped out for the Skyreaver. Cormier's morph was, of course, Skinthinner, and he hit back for damage. They traded hits again. The race was close, just eight apiece. Wise thought hard, then swung in and provoked away the Skinthinner, leaving his Keeneye back on Defense.

Cormier thought hard at end of turn, then untapped, Threatened the Swooping Talon, and swung in with both creatures, provoking the Aven. Wise fell to six, and Cormier showed him a second Torrent of Fire for the kill. 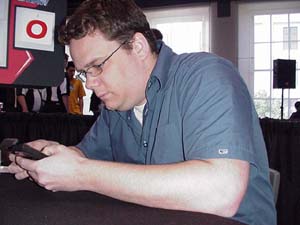 Wise led with Deftblade Elite that was quickly dispatched by Cormier's Crown of Suspicion. They matched morphs and Wise took to the air with Keeneye Aven. Cormier made a Smokespew Invoker and passed it back. Wise sighed before dropping Dragon Scales on his Keeneye and hitting for three. His land play was Lonely Sandbar, and he ended his turn.

Cormier's morph apparently wasn't Skinthinner, as he chose to play Festering Goblin and pass it back. Wise hit for another three and made a Mistform Dreamer. Cormier thought and thought at end of turn, then showed Spark Spray to get rid of it. He untapped, played his sixth land, and played Twisted Abomination.

Wise shrugged and flipped up his Wingbeat Warrior, serving for five in the air. Unfortunately, he tapped his mana incorrectly, and failed to leave mana open for Wing Shards. This error came back to haunt him when Cormier played Torrent of Fire to clear out the Keeneye before attacking. Wise gamely hit for two and played Aven Farseer as well as locking down the Abomination with Frozen Solid.

He was too far behind, though. Cormier made a Goblin Turncoat and sacrificed his Festering Goblin to clear out the Warrior, and he sent the troops again. Wise found a Karona's Zealot and readied his Wing Shards, unfortunately Cormier's precombat spell was Crested Craghorn, so Wise was soon at low life. Cormier finished him.