“What Standard deck are you playing?” Luis Scott-Vargas asked his opponent as they sat down in the Arena for their Round 8 Feature Match.

Luis entered the round on an absolute tear, having won a Pro Tour and multiple Grand Prix over the past six months then kicked the first Pro Tour of 2009 off with an undefeated 7-0 record. Unfortunately for him, he led the match off with not one but two mulligans, flipping a Blister Beetle over while shuffling. “Awkward,” he muttered at the accident, a rare misstep for the Pro Tour superstar.

The lesser known Driessen didn’t let on what he was thinking as he watched his opponent ship hand after hand back. Not happy with five cards, Scott-Vargas was forced to do the unthinkable: start the first game with just four cards in hand. Thomas would start the match with a free Ancestral Recall. 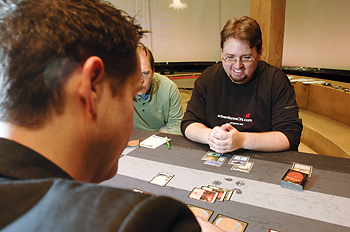 Driessen quickly came out of the gates on the back of a Bloodhall Ooze and Dragon Fodder. Luis made a Plains and used Bant Panorama to find a Forest.

Court Archers soon joined Driessen’s board, slowly growing Bloodhall Ooze, and an all-in attack from the Dutch player put the totals at 20-11 in his favor. He followed up the combat step with Gift of the Gargantuan, but sighed exasperatedly when he revealed solely a land from the sorcery. LSV had yet to play a non-Obelisk spell, and passed the turn for the second time with just four mana on the board. His opponent’s attack put him to 3, and after looking at the top card of his library, Luis scooped.

The second game started in much better shape for Luis as he found a satisfactory opener, then got to watch as Thomas took a turn mulliganing. For the first time in the match, Scott-Vargas played a creature, and a powerful one at that: Tidehollow Sculler. The 2/2 revealed that Driessen was holding lands and a Cylian Elf, which was quickly stolen by the Sculler. The play set Thomas back dramatically, essentially out of gas on the third turn though he was left with his opening creature, a Bloodhall Ooze.

There was a lot of Magic left to play, however, and Luis followed up his Sculler with Cumber Stone. It was just in time as Driessen had found Druid of the Anima to start pumping his first turn Bloodhall Ooze, but when LSV found Path to Exile he simply RFGed the now 1/2 Ooze. The play fixed Thomas’ mana, netting him a Plains, and he had Jund Battlemage to help him create an army of 0/1s.

Scott-Vargas cast Sanctum Gargoyle as a 2/3, but fell to 14 on his opponent’s turn as Driessen ripped a Bull Cerodon from the top of his deck. The 4/5 was definitely problematic for the Luis, but he found a token generator of his own in the form of Puppet Conjurer to stymie the attacks. With a 2/3 flyer coming in the air, the game was soon tied at 6 life each.

Beacon Behemoth was the next play for Thomas Driessen, but when he tried to give it vigilance with its own ability, Luis reminded his opponent the 5/3 was actually a 4/3 thanks to Cumber Stone. Thomas nodded, and used a Path to Exile of his own to answer the Sanctum Gargoyle. Luis search up a land, untapped, then revealed a cycled Resounding Thunder to send the match to the third game. 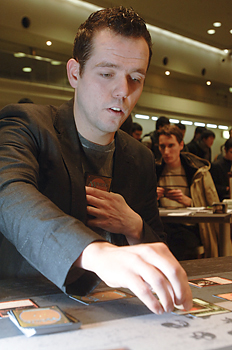 Thomas Driessen of the Netherlands finished Friday 7-0 as well.

Driessen kicked off the final game with a mulligan, prompting a response from his opponent. “If you’re going to mulligan a bunch, I guess it’s best to do it all in one game!”

Red mana was missing from Thomas’ side of the board as he watched his third-turn Topan Ascetic die to a hardcast Resounding Thunder from Luis. The Dutch pro followed up with Court Archers, which prompted Luis’ first creature of the game in the form of Fleshformer. With

available, the 2/2 promised to wreak havoc on Thomas’ board.

Sure enough, the following combat step saw Luis attack his opponent with the 2/2, then use its ability to munch an Exuberant Firestoker. Thomas fired back with Bull Cerodon, but Luis was ready with Path to Exile, then used his own turn to play Blister Beetle with just enough mana left over to activate Fleshformer to kill Driessen’s Court Archers. Despite a dominating first game, the match didn’t look like it was going to end well for the player from the Netherlands.

Still, Driessen tried to make it a fight. He used Hellspark Elemental to set the scores at 15-12 in Luis’ favor, then munched the 3/1 with Thorn-Thrash Viashino to get himself a free 4/4. But his American counterpart just wasn’t fazed, bashing right back to drop Thomas to 10 and playing Rhox War Monk. The following attack saw Thomas drop to 6, and Luis exploded with Vedalken Outlander and Puppet Conjurer to all but seal the deal. When Thomas drew his card for the following turn, he nodded solemnly.

“Good enough!” he said, extending his hand in defeat.