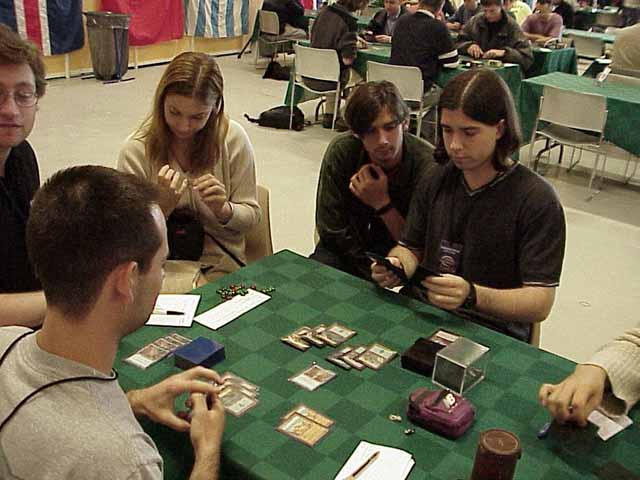 No national pride is on the line in this matchup - just a bit of personal pride as these two friends are paired up against each other in a mirror matchup - literally. The Accelerated Blue deck they are playing is the same, almost to a card. Barrado recently won Grand Prix: Madrid with a NecroDonate deck. Fuentes is the master of mono-blue, he placed in the top 8 of Pro Tour Chicago using a blue control deck.

Although Fuentes mulliganed in the first game, it was not really relevant. The two players spent about ten minutes just laying lands and occasionally Annulling each others Powder Kegs and Grim Monoliths. Barrado drew slightly fewer lands, so he ended up discarding some Treacheries.

Quite late into the game, Barrado - who drew a lot of countermagic - decides to make his move. He Strokes for 3 at the end of Fuentes' turn, but Fuentes allows that to resolve, saving his mana and countermagic for more potent threats.

Barrado casts a Morphling and counters Fuentes' one Counterspell. Barrado chose not to fight hard over this Morphling, but rather try to get his own two Morphlings through onto the table. Barrado had enough countermagic to stop both of them and was able to win in four attack phases before Fuentes found another Morphling to cast.

Second game was a lot more exciting as many sideboard cards saw play.

Barrado tried to cast a Stronghold Machinist but it was countered. Fuentes' sideboard card, a Scrying Glass, met an Annul. Barrado, confident in Fuentes sideboarding out his Treacheries, dropped a turn 5 Morphling with no mana untapped. It entered play.

Fuentes played a Morphling of his own. Barrado Thwarted, but it was countered by a Misdirection.

For several more turns the two Morphlings stared at each with, both players dropping more lands and Grim Monoliths.

Eventually Barrado decided to go for it and cast a Stroke for 7 at the end of Fuentes' turn. His other two cards in hand were Misdirection and Counterspell to Fuentes' one card in hand, so it was a very safe play. Fuentes thought for a while and responded by trying to cast his own Stroke for 7. Triumphantly, Barrado Misdirected the second Stroke to himself, ending up with 14 cards in hand to Fuentes' 0.

On the following turn he played another Morphling and discarded some cards, keeping a very strong 7-card hand. Fuentes conceded the game at this point.