Krempels and Antonino De Rosa used to be teammates on the now-defunct TOGIT team. The are still reasonably good friends, but here they are pitted against each other after sitting next to each other at Pod 1 for the final draft of the weekend. In terms of deck advantage, De Rosa has a clear lead since he swiped all of the good white cards in Betrayers of Kamigawa before Craig could get his hands on them and paired those with a series of strong blue cards to boot. Craig's deck just did not come together in the draft, and while his deck is okay, nobody who knew what they were doing would ever mistake it for "good." 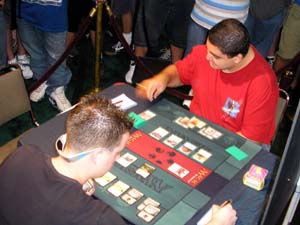 De Rosa aced Krempels out of white in the draft.

The match started with a back-and-forth battle with a series of tight plays in combat, which left De Rosa saying, "I'm actually the worst player on earth." From a play perspective, Krempels was blowing Ant out, earning two-for-ones in back-to-back combats.

Sadly for Krempels, his men were all undersized and the champ kept drawing lands, putting him further and further behind in board position. Krempels still managed to keep things close until De Rosa drew his de facto untargetable dragon (Jetting Glasskite) to carry him to a win while a small horde of 1/4s kept the peace on the ground.

De Rosa led off Game 2 with Blinding Powder and Kabuto Moth, while Krempels played Nikko-Onna and Mothrider Samurai. Kitsune Loreweaver from De Rosa further gummed up the board and it looked like the two white decks would once again stalemate. Just like last game though, Krempels eventually stopped playing spells while he kept laying lands. 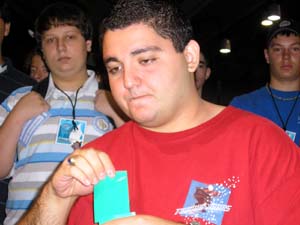 "Just wait for that dragon to show up..." said Krempels.

"You have a dragon?" asked De Rosa.

"God, I don't know what to do here," said De Rosa as he added another Torii Watchward to his growing army. He paused to consider attacking briefly but then said, "I'll figure it out next turn."

In the end, Krempels was absolutely blown out, not so much by De Rosa, but by the double-digit lands he drew each game. At this point, De Rosa remains the only undefeated player in the field and has dealt a minor blow to Krempels' chances to repeat as U.S. National Champion.