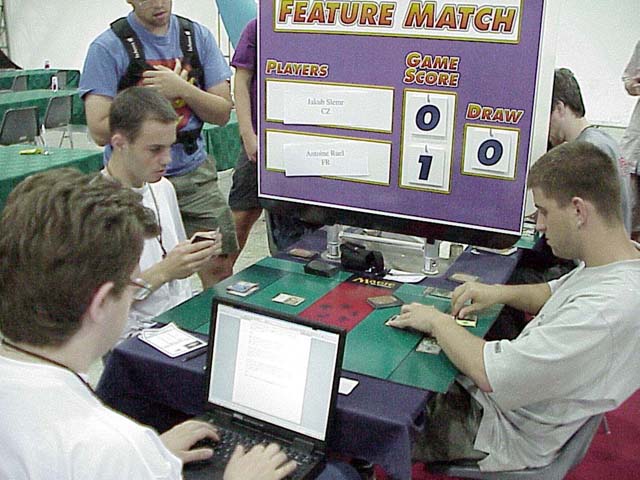 Antoine Ruel first gained notoriety as a member of team Black Ops - one of the world's strongest team-limited organizations. He went on to archive individual success at a number of European Grand Prix since. Slemr's top tournament accomplishment was winning the World Championship in 1997. He has remained on the Pro Tour ever since, often posting solid results.

Slemr took a mulligan, but was able to play out lands of his three colors over the first three turns with his new hand. He cast a Kavu Recluse, but Ruel was way ahead of him, gating a Samite Pilgrim to bring a Silver Drake into play on his third turn. Unable to attack, Slemr tried to mana-hose his opponent by using the Kavu's ability to deny Ruel white mana. Unfazed, Ruel summoned a Coastal Drake.

Despite the Drake, Slemr summoned a Horned Kavu, returning the other Kavu back to his hand. What seemed like a poor play was actually excellent planning - on the following turn, Slemr cast Void for three, destroying both Coastal and Silver Drakes, and discarding a second Silver Drake from Ruel's hand. Volcanic Imp did not remain the largest creature in play for long though - on his next turn Ruel summoned a Waterspout Elemental.

Both players were busy building up their forces. Slemr re-cast his Kavu Recluse and summoned an Ebony Treefolk, then a Horned Kavu. Ruel was relying on his air force to race against Slemr's ground creatures - he cast a Faerie Squadron. Although Slemr had more creatures out, Ruel was ahead in the race. He took care of any chances Slemr might have still had by casting Jilt with kicker, bouncing an Ebony Treefolk and killing the Imp. Slemr conceded.

Slemr was off to a quick start, summoning Llanowar Dead on the second turn. Ruel cast a Prison Barricade without kicker, indicating that he probably had a way to gate it on the following turn. Ruel failed to play another land however, and only summoned a Dega Disciple. Meanwhile, Slemr was busting out. He cast Harrow and summoned an Ebony Treefolk, then a Treva's Attendant. Ruel slowed his opponent down by casting Manacles of Decay on the Treefolk, but still failed to play another land.

Things got far worse, when Slemr used Plague Spores to destroy Ruel's Barricade and an Island, leaving him with a lonely Plains and a 1/1 creature. The game did not last very much longer.

It was Slemr's turn to experience mana problems again. His opening hand had no land at all, so he threw it away, drawing six new cards. The new opening hand had two Swamps only. Slemr kept, managed to draw a Forest on his second turn, and actually pull off a solid opening, with a turn 2 Llanowar Dead, turn 3 double Thornscape Familiar.

Ruel summoned a Coastal Drake, then traded his Shoreline Raider in combat for Llanowar Dead. Slemr, who looked as though he had a very fast start, had no plays on the following several turns - nor could his Familiars attack once Ruel summoned Sea Snidd, then Waterspout Elemental. Slemr was hurting for lack of red mana. He had no way to deal with so many flying creatures though - and more were coming: Ruel summoned a Faerie Squadron with kicker.

By the time Slemr drew his Mountain, he was down to one life point. He vindicated himself by Zapping a Coastal Drake, then scooped up his cards.