Round 8: Jan Tomcani vs. Tommi Hovi 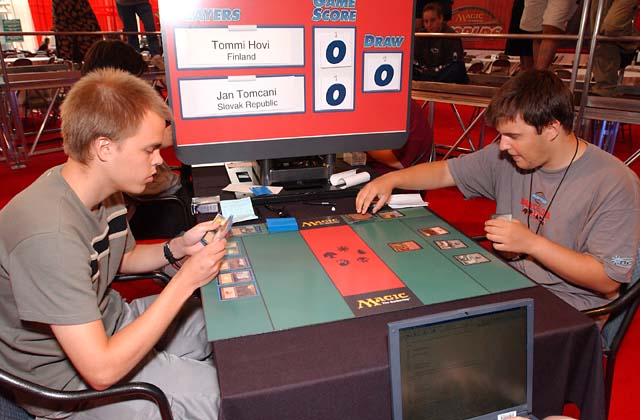 It seemed like everyone at table 1 drafted a good deck, as you can read about if you click here. Tommi Hovi - the Finnish superstar who was the first player ever to win two Pro Tours - had the coveted #3 seat and he was feeding Slovak Republic National Team member Jan Tomcani. Tomcani is playing only his 4th Pro Tour, but in his most recent appearance, in Barcelona, he finished 9th. These are also the last two players with perfect records. Only the winner of this match could be 8-0, a full game up on the rest of the field.

Tomcani started out very aggressively in game 1, playing Maniacal Rage on Yavimaya Barbarian, then he played Phyrexian Rager, then he used Urza's Rage to blast Pincer Spider out of the way of his attackers. Hovi tried to stabilize with a Jungle Barrier, but Yavimaya Barbarian has protection from blue so the 4/4 kept on coming. Tomcani played a Firescreamer while Hovi played a Savage Gorilla. Allegedly, full Invasion Block Limited is supposed to be slower than Invasion-Planeshift was, and I've heard more than one PT regular say "bears suck now." However, you couldn't tell that from Tomcani's deck or his draw. His green-red-black came out fast, hit hard, and Hovi's 5-color green deck full of "hill giants" just could not stabilize the board fast enough. 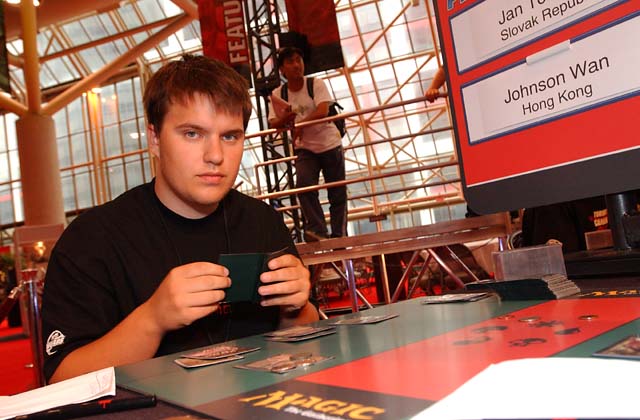 Tomcani used his removal to take out Hovi's first two creatures - Terminate on Pincer Spider and Urza's rage on Savage Gorilla, but this time Hovi had the answer to his Manically Raged 2/2: Flametongue Kavu. Hovi followed up with Kavu Howler and still had 16 points of life to play with. Tomcani seemed like he might be in trouble, but he drew his first pick from Invasion: Pyre Zombie. Like I said, the decks at table 1 were all very, very good.

Hovi played an Ancient Spider and then started to attack into the teeth of Pyre Zombie plus untapped mana. He wasn't going to win by playing defense. He slapped Manacles of Decay onto Tomcani's only other creature (a Firescreamer) so it couldn't block and served. Tomcani traded Pyre Zombie for Kavu Howler and took 6. Tomcani traded Yavimaya Barbarian for Flametongue to preserve his life total (of 10) because he didn't have enough mana to regrow and recast Pyre Zombie on the same turn. The Pyre Zombie wasn't all that relevant to the rest of the game because Tomcani went off the attack. He summoned Stone Kavu, Phyrexian Rager, Horned Kavu, and then Kavu Runner. Hovi's defense was just an Ancient Spider, a Llanowar Cavalry, and an Arctic Merfolk. With Hovi at 8, Tomcani brought out a (6/5) Halam Djinn and attacked with just it. Hovi chump blocked with his Artic Merfolk and then played Stormscape Battlemage with both kickers, taking out the Halam Djinn and gaining 3 life. 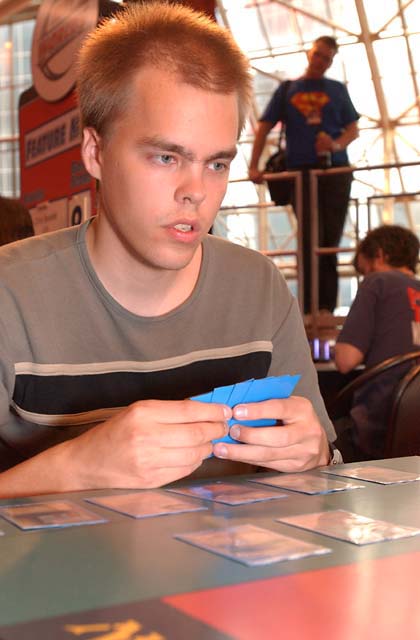 Tomcani attacked with just Stone Kavu on his next turn and Hovi took 5 down to 6 (preferring to pump the Stone Kavu instead of replaying his Pyre Zombie). Tomcani followed up with Sparkcaster, putting Hovi's defense under even more pressure. Hovi answered admirably yet again - playing Nightscape Battlemage with both kickers so he could destroy Tomcani's only forest and return Stone Kavu plus Sparkcaster to Tomcani's hand. Tomcani promptly drew a forest off the top of his deck and both players smiled when he played it. With two of his fatties back in his hand, Tomcani now seemed content to win with Pyre Zombie so he replayed it and left four mana untapped. Hovi did his best to attack back and he used Orim's Thunder to great effect (playing it on his own Manacles as a response to activating it enough times to kill the Firescreamer it was enchanting). He sent all four of his creatures into the Red Zone in an effort to get Tomcani to block badly. He then bought himself an extra turn by pointing Tribal Flames at the Pyre Zombie while Tomcani was tapped out. (That lost forest really hurt Tomcani here because he could only play Thornscape Battlemage or Sparkcaster.) Tomcani played his Battlemage, played another blocker, crossed his fingers, went down to 3, and survived long enough to untap and finish Hovi off with Sparkcaster.