Round 8: Jens Thoren vs. Kamiel Cornelissen 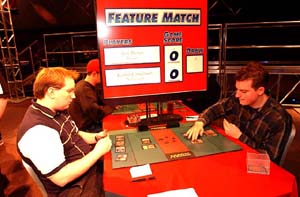 Thoren two-dropped a Frightcrawler to start off the first game, and Kamiel went one better, as he summoned Wild Mongrel. Lithatog joined Cornelissen's side on the following turn. Thoren brought out Dirty Wererat, and had only black sources of mana on the table, although two of them were Bog Wreckages. The Mongrel came through for two more points, Chatter brought forth a squirrel, and Cornelissen used the rest of his mana to bring out Krosan Avenger. The Frightcrawler continued to beat for one a turn, and Thoren finally played a white source of mana. Painbringer hit the table, and one mana was left untapped to allow the Wererat to hold down the fort.

Cornelissen thought for a bit, then summoned a Rabid Elephant, and ended his turn. Patriarch's Desire killed off the Lithatog, and the Frightcrawler came through for another point of damage. Rabid Elephant then became Disrupting Scepter, as it attacked and was blocked by the Wererat, which regenerated after Thoren discarded a land. On end step, Painbringer took down the Avenger. Thoren got a little more aggressive as he sent the Wererat and the Frightcrawler into combat, and played a second Wererat. 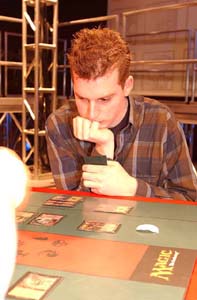 Rabid Elephant and the Mongrel attacked. The Wererat blocked the Mongrel, and Cornelissen discarded a card, forcing the Wererat to regenerate or die, and saving his Mongrel. Thoren discarded two cards, and removed the four cards in his library from the game to take down the Elephant. The Frightcrawler dealt another point of damage, and Aven Cloudchaser hit the table. This left Thoren tapped out and unable to regenerate his Wererats, but this was not too risky since Cornelissen only had Werebear, Mongrel and a squirrel on his side.

He discarded three lands, which allowed the Mongrel to take down a Wererat and the Cloudchaser. Chatter was flashed back, and Cornelissen only had one card in hand, and a board consisting of two squirrels and a 4/4 Werebear. Thoren brought out Whispering Shade. The next attack saw it take down a Werebear, while the Frightcrawler continued on its merciless rampage of a point of damage each turn. The Glacier drew another Chatter, bringing his collection of Squirrels to four. One squirrel took down a Crypt Creeper in combat, and Cornelissen brought out another Mongrel. 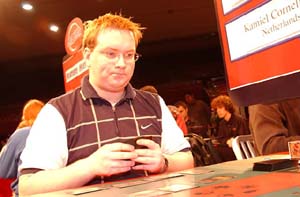 With a regenerator and four cards in the graveyard to feed Painbringer, Thoren was in a good position. He attacked with Frightcrawler and the Wererat. Wild Mongrel turned black and blocked Frightcrawler, while Werebear blocked the Wererat. Thoren set up regeneration shields until he had threshold, allowing him to come out on top in combat. Looking at a poor board position, Cornelissen conceded.

Both players were deckchecked before Game 2, and it was discovered that Cornelissen had a marked Barbarian Lunatic in his deck. The penalty was a match loss.

2 Chatter of the Squirrel

1 Chatter of the Squirrel 1 Woodland Druid