Round 8: Josh Tabak vs. Jeff Garza 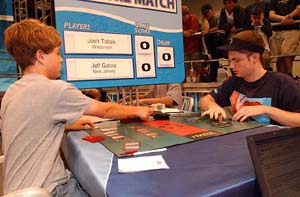 Josh is from Madison, Wisconsin, and played in the JSS last year. "Hi to Dan Bock, who's lending me this deck," he added before we began.

Jeff is from Sterling, New Jersey – "It's the size of a small football field," he comments. "Hi to Michael McGee, for not playing in JSS so I could have a chance." (McGee was undefeated in Nationals after Day One, and was also qualified for the JSS tournament. Surprisingly enough, he chose not to drop to play in the JSS.)

Josh led with a mountain and a Grim Lavamancer, and Jeff countered with a Krosan Verge of his own. Josh's second play was a forest and a Wild Mongrel, setting up some early offense. "Nice," Jeff commented as Josh discarded a Basking Rootwalla to pump up his Wild Mongrel.

Josh sent all his creatures into the Red Zone on his next turn, and discarded a Violent Eruption to pump the Mongrel. He paid the madness cost, and Jeff allowed it after perusing his hand quickly. He sacrificed the Verge to get some land, and looked very dismayed at his chances to win the game.

Josh attacked with the Mongrel and the Rootwalla, and added no effects before damage. Jeff played a Cunning Wish to get Moment's Peace from his sideboard, and Josh said after he passed the turn, "I hope you don't have another one."

Josh attacked again, bringing Jeff to three, then removed two cards in his graveyard with the Lavamancer's ability to bring Jeff to one. When he removed the top two cards again to try and kill Jeff, Jeff cast a Renewed Faith.

Josh attacked for a third time, and Jeff sighed. "I'll burn another Cunning Wish," he said, removed the Wish from the game, and snagged the flashed-back Moment's Peace. Josh kept up the assault, each time sending his creatures into the Red Zone and having them beaten back by Moment's Peace.

Jeff perused his options and cycled a Renewed Faith to put himself back up to seven. "Could Wrath be it?" Josh asked, but Jeff just shook his head and played a Compulsion. Josh tapped three and played an Elephant Guide on his Wild Mongrel, which Jeff allowed to resolve.

But when Josh attacked, Jeff burned the third Cunning Wish to get the Moment's Peace. "This is a wonderful strategy," Josh said. On his next turn, Jeff played a Deep Analysis. "Me?" Josh asked, adding some humor into the situation. He attacked yet again, and pumped Wild Mongrel before damage. Jeff just played that Moment's Peace he'd been hanging on to.

"It's not supposed to work this way," Jeff said as he flashed back Moment's Peace to nullify Josh's attack phase for the sixth time in a row.

"I can't draw burn," Josh whined. "I can't draw ANYTHING!" Jeff replied. His active Compulsion didn't seem to be helping that situation. He finally cast a Deep Analysis, the surveyed his options after drawing his cards. He got rid of another card, then threw his hand on the table in frustration. "Four Wrath of God in there!" Jeff said, knocking on his deck angrily.

Jeff led with a Krosan Verge, and Josh responded with a Forest and a Llanowar Elf. His second-turn play was a Wild Mongrel, followed by a face-down morph creature on his third turn. Jeff just sacrificed his Krosan Verge and then played another land – a Skycloud Expanse. He finally got to cast one of those Wraths of God that he'd been talking about all through the first game, and all of Josh's creatures hit the graveyard. 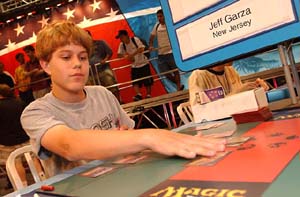 Josh, completely unfazed by this turn of events, played a Grim Lavamancer and then swung with it on the next turn. He played another to keep it company, and Jeff had no responses. He instead sacrificed another Verge to find some more land, and then played a Deep Analysis.

Josh played an Elephant Guide on one of his Lavamancers and swung, but Jeff was holding the Chastise. Josh then played a Basking Rootwalla and Firebolted Jeff, who seemed perfectly all right with this turn of events. He kept discarding cards to his Compulsion until he ran out of mana, but didn't find anything he liked.

Josh played a Call of the Herd and used what was most likely the most interesting token of all the elephants floating around – the cap from his pen! Jeff was not amused, and cast a Renewed Faith to go up to 22 life. Josh played his fourth land of the game (about five turns too late) and attempted to flash back Call of the Herd. It met with a Memory Lapse.

Josh tried numerous other spells (Basking Rootwalla and Firebolt) but he couldn't penetrate Jeff's defense, and conceded rather than prolonging things more than necessary.

Josh led with a Grim Lavamancer, then followed it up with a Volcanic Hammer. Jeff, meanwhile, played a Krosan Verge on his first turn and then a Plains. Josh played a Call of the Herd (his pen cap making a guest appearance as a token again) and attacked with the Elephant and the Lavamancer on the subsequent turn. Josh then played two Firebolts to bring Jeff down to 9 life.

Josh attacked again, but only with the elephantine pen cap. Jeff was holding the Chastise, but Josh flashed back the Call of the Herd later on in his turn. Jeff drew his card and perused his options for a while, finally settling on passing the turn. Josh announced an Elephant Guide to put on his pen-cap Elephant, which Jeff let resolve. When Josh attacked, Jeff then played Moment's Peace. 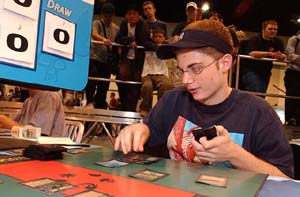 Jeff played a Compulsion and passed the turn back to Josh, who removed a couple of cards from his graveyard to use Grim Lavamancer's ability. This brought Jeff down to 10 life, and when Josh attacked, Jeff was forced to flash back Moment's Peace.

Josh tapped three and slammed a Static Orb on the table, now that Jeff was tapped out...and Jeff slammed a Counterspell down almost as quickly. When Josh attacked again, Jeff cast another Moment's Peace. Josh flashed back a Firebolt to deal more damage to Jeff, bringing him down to 8 life.

Jeff tapped four and played a Wrath of God, leaving that pen-cap Elephant in play. "I'm cracking under the pressure here," he commented with frustration in his voice. Josh played a Blistering Firecat and attacked with it and the Elephant. Jeff played a Renewed Faith and took the damage, ending up at 4. Josh placed the Firecat in the graveyard and then said, "Wait, I'm not done!"

"You put the Firecat in the graveyard, clearly, you're done," Jeff says.

Josh was angry with this bit of news, but managed to find a Volcanic Hammer and throw it at Jeff's head. Josh maintained his composure, though, and Jeff lost shortly after.